I Was A Waitress...Back In The Day 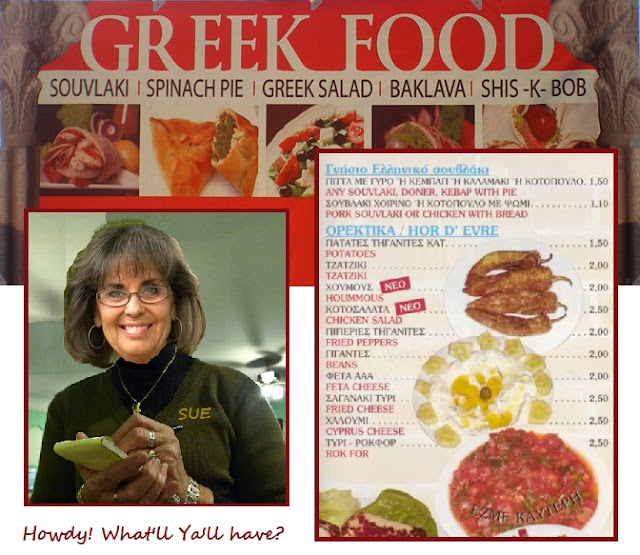 It was 1969...we were a long way from Texas...I needed a J O B!
Zorba...the restaurant owner asked...Do you speak Greek?
Sue...me...answered....skewze me?
Zorba....marking application...No speakada Greek!
Zorba....Do you have any waitress experience?
Sue...I sure do.  Back in Texas my Daddy owned a Drive Inn and I grew up waitressin'!
Zorba....here in the state of Maryland we call that a Theater.
Sue...Huh?  I never heard of a Theater Carhop!  Ain't that somethin'!
Zorba...Your Hired!

I started that very NIGHT...the 4 to midnight shift!  About 4:30 Zorba started seating folks in the front dining room, at the bar and in the back dining room.  Soon as they were seated, I could hear him tell the patrons...in Greek...your waitress will be right with you as he nodded toward me.  I was lookin' over my shoulder for the other waitress'...surely he didn't mean me... for three rooms spread out from here to Dallas!

He did!  There were NO other waitresses!  No wonder I got the J O B!  I knew it...he was desperately seeking a Non-Greek speaking Carhop from Texas who was also an actress and a race horse!  Whatever!!!  So, in my best Texas/Greek accent I sashayed right up to those folks and said, "How're Ya'll?  What can I get for Ya'll this evenin'?  I swear, you'd think I was speakin' a foreign language right there in Maryland, America!  I never saw so many slacked jawed people or eyes poppin' open in my whole life!

That first night I made $50 in tips!  HiHoney said, 'Whoopee!!! You sure must of had some big bucks on the tickets!"   Nope, I said, it was the weirdest thing...they all wanted me to TELL them about the Evening Special that was the cheapest thing on the menu.  What was it, he asked?

Sure made my job easier since I couldn't begin to spell or pronounce TZATZIKI much less know what it was when I picked up the orders from the Cooks.  Let me tell you about the COOKS.  They wore those big white hats and I don't mean Stetsons, and when I mentioned that there sure were a bunch of cooks for there only being ONE Waitress, they informed me that they were not called COOKS!  The CHEF'S didn't have a clue about mashed potatoes either.  After all night of the CHEF'S making me READ off theTickets....all those orders of Frrrriiiiied Chhhiiicken and Maaassshed Potatoes they told me they didn't make maaaasssshed potatoes...they made creamed potatoes!  OMG!!! 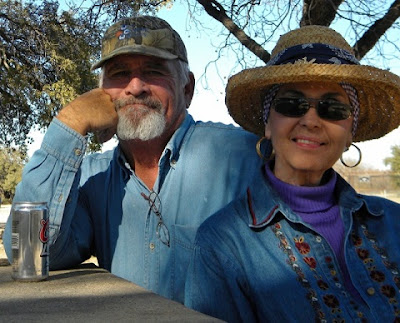 Here we are forty-three years later talkin' about being Retired and all the J O B's  we've had.
HiHoney officially retired in 2010!  Me?
Well, HiHoney says,
"Sue, you can't say you are retired from a job when you haven't had a job."

"How about when I was a Waitress in that Greek Restaurant in Aberdeen, Maryland?"
That was one of the funnest JOB's I ever had.
I made great TIPS...the customers always asked for my section and for some
reason wanted me to read the Menu to them...like they couldn't read!
Looking Back on The Day...I now know...
Have you ever heard a Texan pronounce Greek Food?
They hadn't either!

You are too cute, Sue. I can just picture this scene. I didn't realize you were here in MD. We sure do have a lot of Greek restaurants in this state.

I'll bet you charmed the britches off all those customers.

TY for sharing your charming story.
Have a beautiful day ~
TTFN ~
Hugs,
Marydon

Too cute! I bet it was a treat to hear you say that Greek menu! You probably served Don's aunt & uncle!
(we finally got internet but for how long?!)

Love this post!! No wonder you made such good tip money! I would've asked you to read the menu too!
hugs!

I can just imagine your accent and the interest they all had in it. When we lived for one year in Oklahoma people would often ask me to say certain words and then they'd chuckle - it was all in good fun.

Fun memories y'all! I think everyone should be a waitress for a while, very interesting job:@)

I enjoyed that story Sue. All these years and never heard it. Could have an order of Dolmades?

I love your blog. I just spent several minutes ready some of your other posts. I think you have such a sweet wit...and are so interesting. Love your scrapbook story (flip scanner) and REALLY enjoyed this one about your waitressing job in the GREEK rest. How funny!

Keep up your great shares!!

Hope you've had a great weekend. I can cast my Pink Snuggie off today...we're gonna be in the 50s!!! A heat wave, but with lots of wind that will be bringing in our next blast of winter!

Crud....I meant "READING" not "READY" your posts. I will NEVER learn to "preview" before I hit the "publish" button! :(

You were probably the best entertainment they had in a long time! You two sure grew up to be right handsome and pretty too!~Ames