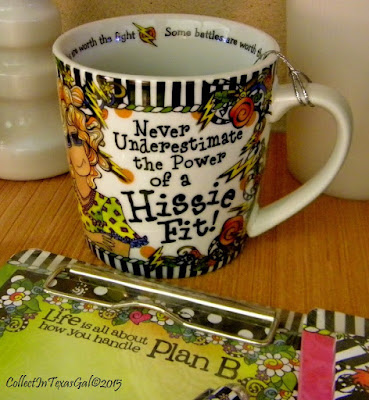 Whole New Something or The Others 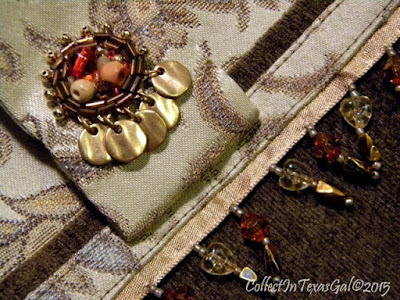 First so I got my fair share and Last to get whatever was Leftover.  I mean, there is some stuff that nobody wants, but still has possibilities to become more than it was.

It's that kind of thinking that has landed me in a 'Want Not State of Stuff' that I feel compelled to make 'Whole New Something or The Others'. 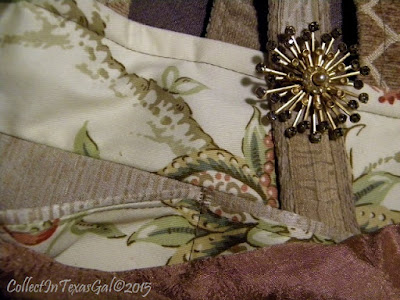 So, here I am with a 'Want Not' for over one hundred samples of drapery and upholstery fabrics that were destined for the dumpster.  "Oh what a waste that would be," said I,  and promptly rescued them to come home with me and dwell amongst the over one hundred patterns rescued a few weeks earlier.

Bless their beautiful patterned and textured hearts, they were completely battered and unorganized which required sorting into like patterns, colors, textures, and possible future 'Whole New Something or The Others. 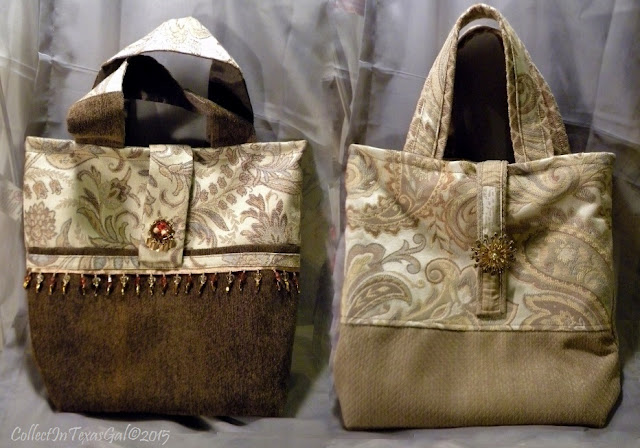 Two Whole New Something or The Others.
by
4R's Sue
Rescue-Recycle-Repurpose-Resale
Posted by Sue McPeak at 7/14/2015 4 comments:

The WORKS of July 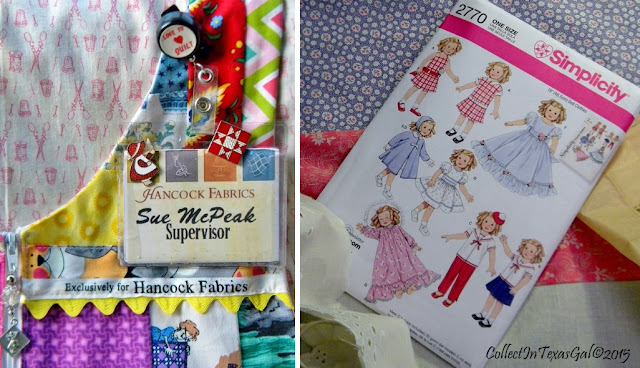 Once the FireWORKS and all the Patriotic Celebrations were shared and over, I hit a blank wall...which is somewhat like a Genealogist's Brick Wall in that I didn't know what to do next.  Bet you are having a hard time believing that happens to me...you know with my OverDoSueness and all.

At any rate, I wandered around for a couple of days, dabbling in this and that but not getting much done in my Sewing Studio.  Now at my JOB WORK, I got lots done and WORKED more hours than scheduled.   I did get a couple of WORK Aprons made...one for me and several for co-WORKERS.  As part of my dabbling I made Sarah Jane a nightgown.  I haven't blogged about her in a long while...she's my childhood doll...she's in need of some new clothes.  Isn't this a cute pattern by Simplicity?  The outfits are designed in the style of the 1950's which is perfect for Sarah Jane as she was my Christmas gift when I was 10 years old in 1957.

Finally, this past week, with fewer hours at my JOB WORK, I had some time to WORK in the Studio.  I re-WORKED and organized a collection of Bag Fabrics from summer fabrics to fall fabrics which led to re-WORKING trims, buttons and jewelry accessories for embellishments on the New Fall Bag design. 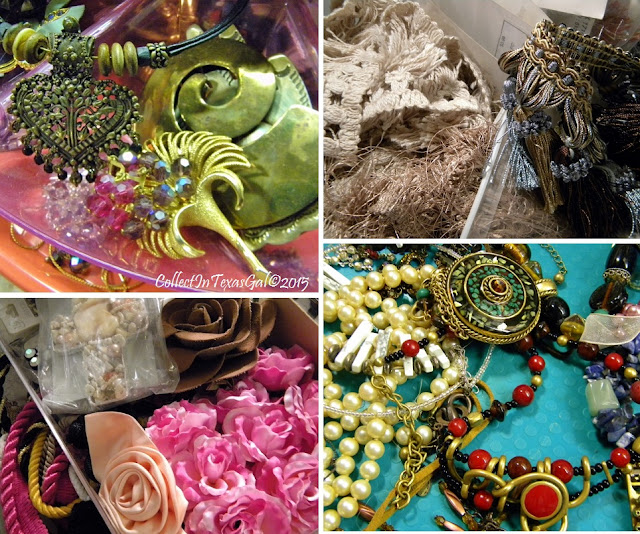 Just the WORKING INSPIRATION I needed!!!
So back to WORK on the NEW LINE of FALL BAGS!
I Love It when everything WORKS OUT!
Posted by Sue McPeak at 7/10/2015 7 comments: 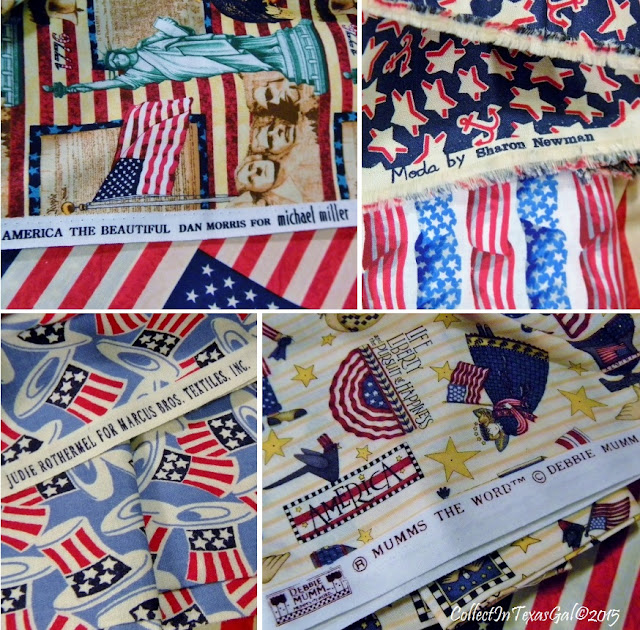 For those of you are Fabric Junkies, you probably notice that fabric follows what is 'Trending', as they say in the social media world.   For instance when there is an event that triggers a wave of 'Patriotic Passion', it is quickly reflected throughout just about every commercial avenue imaginable.

Fabric designers and the Textile Companies they design for are quick to jump on the Patriotic Passion Wagon to give the Fabric and Fashion world a plethora of Red White and Blue in a variety of themes from Vintage to the latest in Pop Graphic Designs.  As a Fabric Collector...ahem...of course I have a few pieces of Patriotic Prints I have been collecting, hiding, hoarding, saving for.....I don't know, but have finally reached the point where it is time to use it on something other than making quilts. 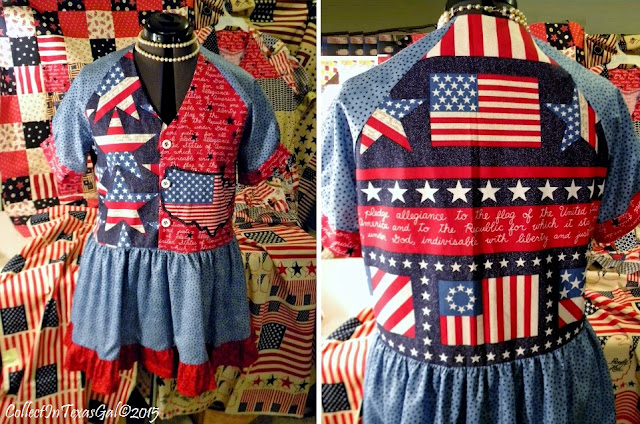 TaDa...Modella models one of my Flag Fashion Tunic Tops.
I guess I will always be a 'Piecemaker' whether it be for Quilts or Fashion! 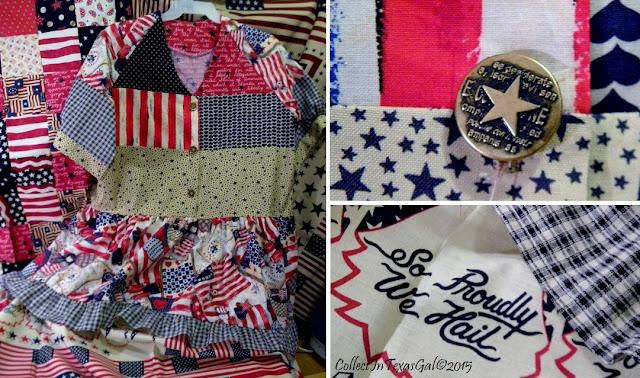 I pledge allegiance to the Flag of the United States of America,
and to the Republic for which it stands,
one Nation under God, indivisible with
Liberty and Justice for All.
The Pledge of Allegiance was originally composed by Francis Bellamy in 1892 and formally adopted by Congress as the pledge in 1942.  The official name of The Pledge of Allegiance was adopted in 1945.  The last change in language came on Flag Day 1954 when the words "under God" were added. 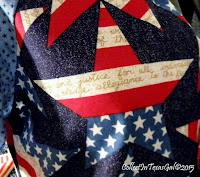 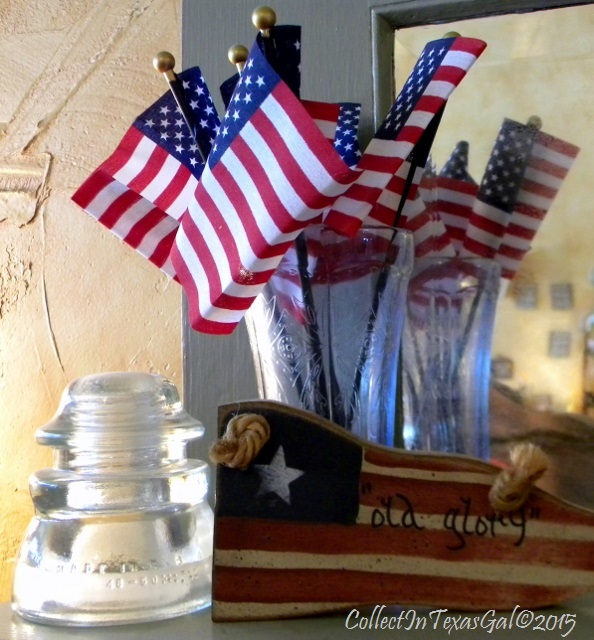