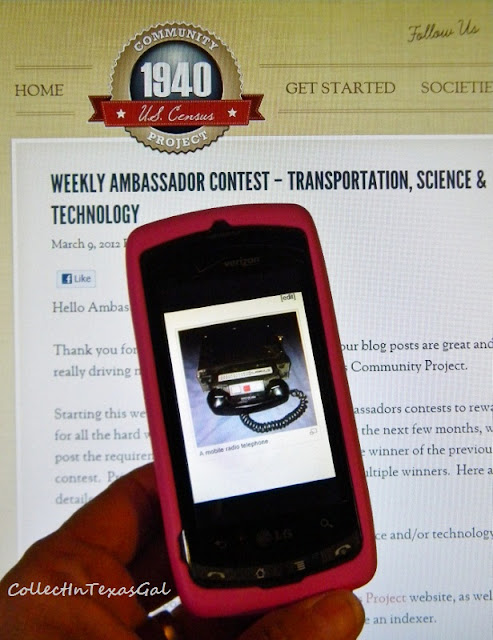 One Ring-A-Dingy...Two Ring-A-Dingy!!!
Hello...Yes, this is Thelma.
Say that again...I can barely hear you over the radio.
This is Willard?  Where are you? .
You are not!  You are suppose to be in Japan!
You are in a car?
You are not!
I never heard of such a thing!
Have you been drinking?
Listen, I have to hangup...Sue's crying.
Bye

That's the conversation my Mother could have had with my Dad a month after I was born in 1947.  That is if the newly invented Mobile Phone had been available to the general public...every man, woman and teenager in the Universe,  like it is today.  Why my Mother didn't even have a phone in the house much less in the car.  Which would explain her trudging through an Iowa snow storm to hitch a ride in a sled to the 'Birthing Home'.  No Phone...No Car...No Way Today!

Those Pre-Cellular phones were usually mounted in cars and trucks or in a brief case. The transceiver (transmitter-receiver) was mounted in the vehicle trunk and attached to a handset which was mounted near the drivers seat.  Imagine sticking that in your purse or pocket!

In December 1947, two engineers from Bell Labs proposed the idea of 'hexagonal cells' for mobile phones in vehicles.  One of them was Douglas H. Ring.  I bet he caught alot of 'Ring-A-Ding-A-Linging'.  Another Bell Lab engineer proposed that the cell towers be at the corners of hexagons rather than the centers and have directional antennas that would transmit/receive in three directions into three adjacent hexagon cells on three different frequencies.  These guys were thinking so far ahead of their time that the technology to implement their ideas was not developed until the 1960's.

I do not understand one word of what I just wrote.  It'll be okay though, I don't need to understand how it happens...just so when I touch the ON Button and Swipe the OPEN thingy I can Reach Out and TOUCH  my Contacts, and if they don't answer, I can still talk to them until the messenger has heard enough and cuts me off, or 'Satellite Heaven Forbid',  I get dropped.

Since 1947, Mobile Phone Technology has taken the mobile phone from the trunk of cars and trucks to pockets of pants and purses.  Our 1940's ancestors, who 'Never heard of such a thing', would surely question the sobriety of those of us, who today, are walking up and down the grocery store isles talking to ourselves.

It happened on February 19, 1947
The Introduction of The Mobile Phone 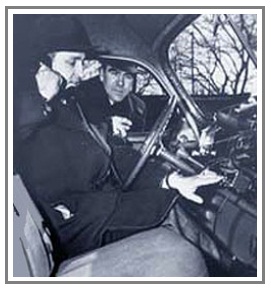 “As part of the1940census.com ambassador program this blog post enters me into a drawing for a $50 Gift Card to Amazon.com."
Posted by Sue McPeak at 3/12/2012

I remember picking up the phone and asking the operator for help with my homework. Those were the days weren't they? Then came party lines. That was fun.

Oh sweetie thanks for the memories this evening. I enjoyed myself so much. Hope you have a glorious week. Many hugs and much love, Sherry

Lily Tomlin! She was one of my favorites as well! Local operators, party lines, and now we're on the verge of the home phone becoming a thing of the past. All in such a short time.

Interesting that your article is about people thinking way ahead of their time...imagining cell towers back in the 1940s. My post is much the same with Vannevar Bush thinking of HTML and the web!

Thanks for the smile, Sue. I have a cell phone for my mother, too. The problem is she never turns it on. If she wants to use the phone when she is away from home, she asks to use a phone belonging to someone else. Even though her phone is right there in her purse. Ugh! It makes me crazy.

Hi Sweet Sue! My poor daddy hated that party line the people around the corner from us had three teenager daughters and he could never get thru the phone line!
I need to catch up with you.
Time is running short for Shannon but if you can jump in an help I would be so happy!
I did not know where to start. Someone else offered to make a quilt square and now I can not find her e mail.
I could not get to your e mail. Give me a shout here and see what we can do!
I think if she does pass away the family would have some comfort in knowing how may cared about their precious child.
Love your famaily history girl!
Love and Hugs Anne

Hi Sue,
Thank you so much for stopping by and checking out my blog post concerning Rosie the Riveter!

I love your post about the not so mobile, mobile phone. I can just hear Lilly saying one ringy dingy two ringy dingy! How far technology has come in 70+ yrs!

I will be back to check out your tree, there are some names that look familar to me. Keep up the good work!

I recently watched "Sabrina" with Audrey Hepburn and was surprised to see a car phone. The movie was made in 1954, but I'm sure it was very uncommon for people to have "car phones" even then. Technology advances so fast these days!

Congrats on being one of the contest winners!