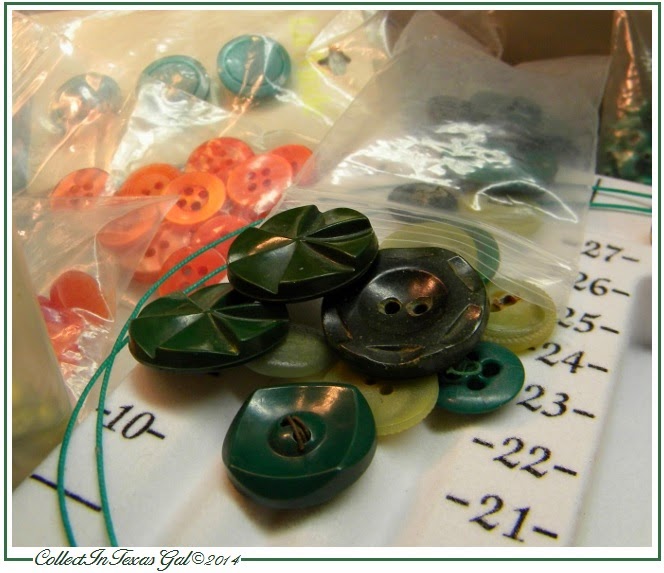 JULY ~ Button Sickness...A Real and Present Danger
About my 'Sick Buttons'.  I feel terrible....who knew that a Mason Jar would act as a petri dish when mixing metal and plastic buttons together.  My prized celluloids....by now they surely have a bad case of asthmatic-celluloiditis   All these years they  have been stored in closed glass jars or sealed Ziploc bags when they should have been in an open container so they could breathe.

...unless I can find a cure for 'Asthmatic-Celluloiditis'! 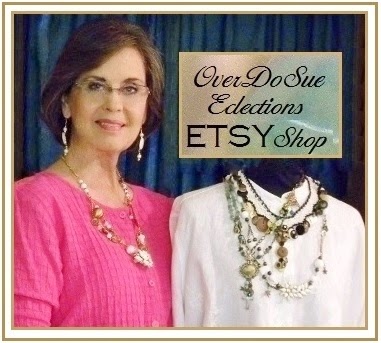 AUGUST ~ Announcing...A Jewelry Affair In August
I'd like you to meet my Jewelry Model...Jewel Modella. She is about as perfect a model as there is.  She has a lovely wrinkle free neck and her posture is perfect.  I'm telling you those shoulders are straight as can be.  I never have to tell her to stand up straight.  She also never complains when I stick her with pins or ask her to turn this way or that way.  Just so you know, she's the one on the right...the one wearing white.  The other model in pink has a long history of not standing up straight...talked about that HERE...and my neck has wrinkles. 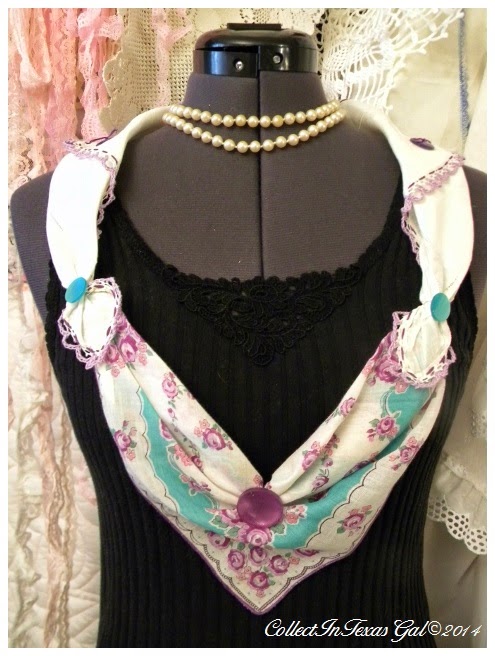 SEPTEMBER ~ Ending My Hankering for Hankies
I started collecting hanky's long after they were considered a necessity for moping worker's sweaty brows,  snotty nosed kids and other yuck uses.  Which, by the way, contributed to the demise of the hanky and the invention of disposable tissues.  Queen Elizabeth made the hanky fashionable in court.  When she flicked her hanky over her shoulder, it meant "I'm tired of entertaining you people....you may leave...now."

Why, at one point in hanky history it compared to the 'Smart Phone' of today....no one would think of leaving the house without one. 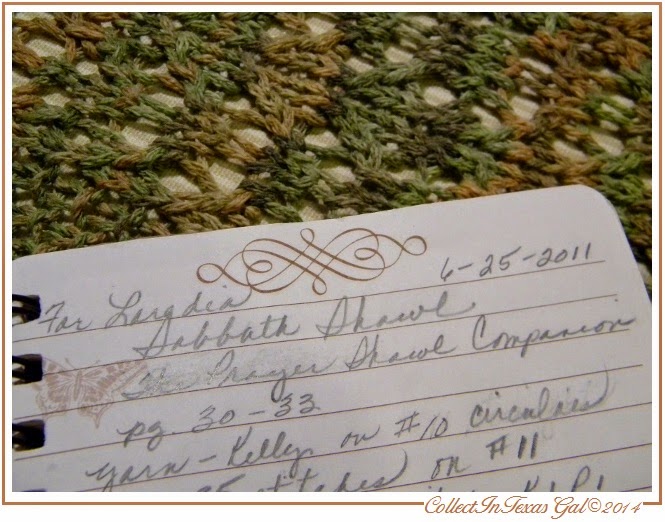 OCTOBER ~ The Sabbath Shawl
I will probably go to my grave saying, "Sure, I'll be glad to MAKE that.".  Then get busy getting all the stuff together to MAKE 'that' while I'm standing in line at the Pearly Gates.
"Yes, Saint Peter, I meant to finish this before getting to the front of this line so I wouldn't have to confess at being the 'biggest procrastinator' who ever stood before you."
........."I will not procrastinate, Amen." 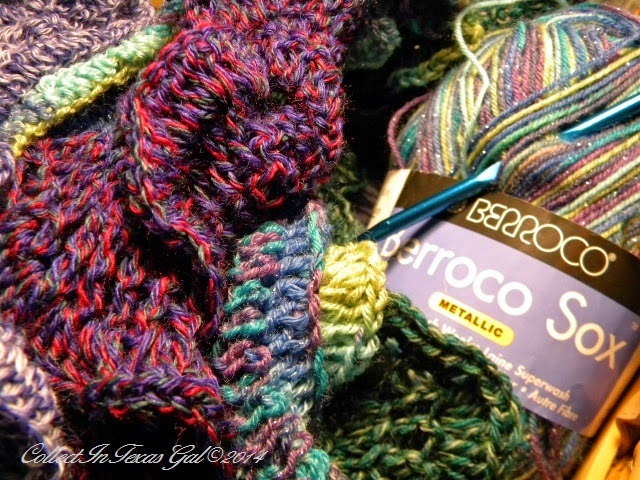 NOVEMBER ~Ye Olde Sock Yarn Saga~Entitled Living with SSS
Once upon a time I wanted to knit socks.  A relatively simple thing to want to do for someone who could do the basic knit and purl stitches and a few more exotic stitches like YO, SSK, K2tog,P2sso, and URSo InOverURhead.  Sure enough, I was so in over my head with thinking Sock Knitting was for me.  First of all, I am a 'Once Is Enough' gal.  Yup, that is a real problem when it comes to making TWO things just alike.  I contracted 'SSS'...Second Sock Syndrome.

DECEMBER ~ Christmas Chimes and Oh Come Holy Spit
Christmas Chimes...by Erma Bombeck ...I used to hear chimes.  I heard them the year one of my sons gave me a tattered piece of construction paper on which he had crayoned two hands folded in prayer and a moving message, OH COME HOLY SPIT!
.....Just as I was repeating to myself her last wish about hearing the chimes just one more time.... I DID...hear them...CHIMES!
From my Snow Globe Christmas Gift from HiHoney...husband.  Some things never change.  His thoughtful gift made Christmas 2014 one of ringing chimes again and the return of...

Post Post Script...Thank-you to everyone who reads CollectInTexas Gal.  I appreciate your visits whether you leave a comment, 'g+1', share on Facebook or pop in from another blog.  Blogland has become an extremely busy and competitive social media entity over the past few years, and that makes your 'Following and Friendship' doubly appreciated.  Thanks again, and Happy New Year!!!

Sue, you are always so wonderful with words. I enjoy coming over here and smiling at you and your projects. Hugs and much love in 2015, Anne