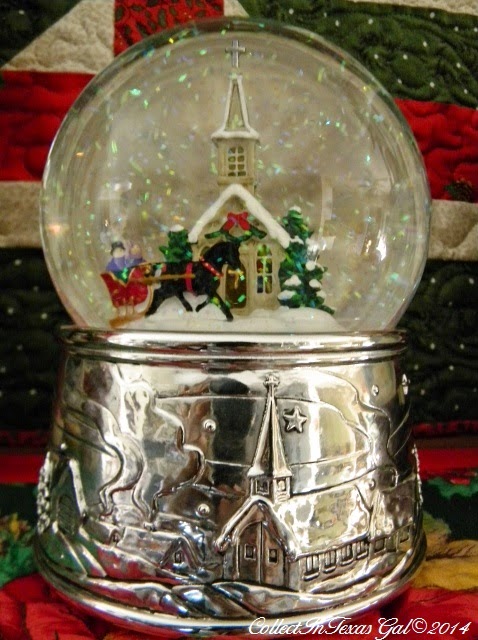 Reflecting on my 'Blogging Christmas' Past' this month, has been somewhat of an eye opener.  Christmas has changed.  I can't put my finger on the exact reason, but I think the following may shed some light on why I feel this way, and perhaps for you, too.

Christmas Chimes...by Erma Bombeck (here in part)
Everything is in readiness.
The tree is trimmed.  The cards taped to the door frame.  The boxes stacked in glittering disarray under the tree.
Why don't I hear chimes?

Remember the small boy who made the chimes ring in a fictional story years ago?

As the legend, went, the chimes would not ring unless a gift of love was placed on the altar.  Kings and men of great wealth placed untold jewels there, but year after year the church remained silent.
Then one Christmas Eve, a small child in a tattered coat made his way down the aisle, and without anyone noticing he took off his coat and placed it on the altar.  The chimes rang out joyously throughout the land to mark the unselfish giving of a small boy.

I used to hear chimes.  I heard them the year one of my sons gave me a tattered piece of construction paper on which he had crayoned two hands folded in prayer and a moving message,
OH COME HOLY SPIT!

They're gone, aren't they?  The years of the lace doilies fashioned into snowflakes...the hands traced in plaster of paris...the Christmas trees of pipe cleaners...the thread spools that held small candles.  They're gone.  The childish decision of when to break the ceramic piggy bank with a hammer to spring the 59 cents is now resolved by a credit card.

It'll be a good Christmas.  We'll eat too much.  Make a mess in the living room.  Throw the warranties into the fire by mistake.  Drive the dog crazy taping bows to his tail.  Return cookies to the plate with a bite out of them.  Listen to Christmas music.
But Lord....what I would give to bend low and receive a gift of toothpicks and library paste
and hear the chimes just one more time!

Doesn't Erma put her finger right on the reason why Christmas changes from time to time?

Just as I was repeating to myself her last wish about hearing the chimes just one more time.... I DID...hear them...CHIMES!

From my Snow Globe Christmas Gift from HiHoney...husband.  Some things never change.  His thoughtful gift made Christmas 2014 one of ringing chimes again and the return of...

I just read this aloud to my hubby and you have him in tears!!!! I will never forgetn "Oh come Holy Spit!! That memory takes Christmas memories to a whole new level!!!! Our Christmases are changing but I am still trying to enjoy each one as a little girl. My Mom is in rehab and its been stressful over the last 2 months, she had elbow replacement and cracked her pelvis. We have had so much illness too but God is still good and we are enjoying his birthday.
Ann

I hope they were tears of mirth. I hope your Mom does well in her recovery. She's from the generation of tough gals. Thanks for stopping by.