This 'Old Mare' Is Goin' Home

'Don't pick up this 'Old Mare'. She is goin' home'
October 1908
Dear Mama,
I am fine.  Don't worry.  I am workin' at the Cotton Mill in Post City.  Stayin' with Aunt Annie and Uncle Oscar.  Don't know when I will be home.
Your son,
Mert
PS...Tell Grandpa, I am sorry bout taken' Delsey.  I knew she'd find her way home. 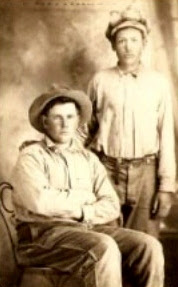 Merritt Douglas Carroll was but a boy of ten years old when he hung the cardboard sign around Delsey's neck with the note to his Mama, Martha Jane Marley Carroll. The year before, Mert, got all the way to Snyder, Texas, before he was picked up by Sheriff Frank Christopher.

The Sheriff knew exactly who the boy was, and that the horse he was riding was stolen.  Delsey belonged to Elisha Marley over in Borden County.  Sheriff Christopher knew the Marley's pretty well since his brother Oscar had married Anna Etta Marley in October, 1901.

The story goes...Mert was pickin' cotton in his Grandpa's cotton field on a clear day with blue skies above when he dumped out his half full sack, threw it over Delsey's bare back and took off.  He made his way as far as Scurry County by pickin' cotton along the way for 50 cents per hundred pounds.  When Sheriff Christopher picked him up he had $2 in his pocket.

When asked why he took off with his Grandpa's horse and cotton pickin' sack, he said, "We need the money."

Mert was a man of few words with a work ethic that went back to his days as a 'Cotton Picker' on his Grandpa's Farm in Gail, Borden County, Texas.  From Post City, Texas he worked his way to California and then on to Canada.  His Mama didn't see him again until around 1915 when he returned home to help her move to West Texas. 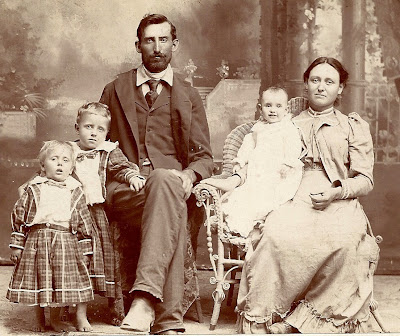 Mert was the second child of Stephen Bennett and Martha Jane Marley Carroll.
Pictured here with his parents and siblings in 1900.
Mert is the first little boy...standing next to his older brother Othella.
Sister Estella in her mothers lap.
Their father, Stephen B. Carroll died in June 1903....three years after this photo was taken. 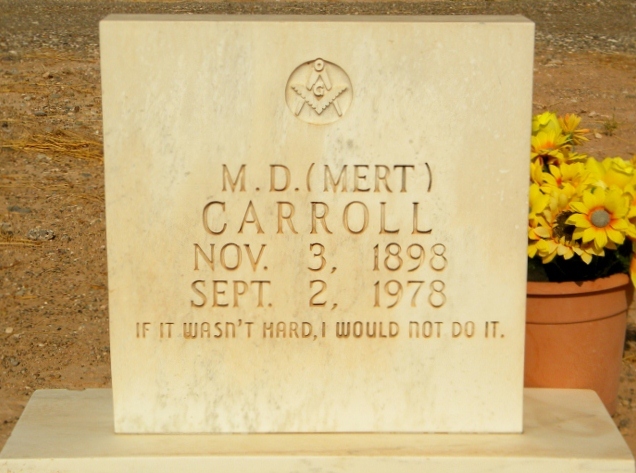 Mert was my Great Uncle.
I was fortunate to know him quite well in his Golden Years as he lived with my parents on their Farm in Grandfalls, Ward County, Texas.
Dad was Mert's nephew by his sister Estella Carroll Pittman.


Mert was stricken with Glaucoma in his fifties and by his seventies was only able to see light and dark shadows.  His blindness slowed him down, but didn't keep him from working everyday of his life.  He spent many hours in the fields of the 'Pittman Family Farm' grubbing mesquite with a pick axe.  He found his way from the house to the field  by following a 'Line of Chimes' he created from 'Hub Caps and Tin Cans'.
He Rests In Peace, but probably still 'Grubbing Mesquite',
in Tamarisk Cemetery, Grandfalls, Ward County, Texas
He was true to his Epitaph to the end of his life.
Merritt Douglas Carroll was a great story teller and I was a good listener.
Thanks Uncle Mert for sharing your Life Stories,
Sue
Photo Credits
T J Brown's Cotton Gin...Photo from Martha Jane Marley's Photo Album
Othella and Mert Carroll about 1918...Mert (standing)
Carroll Family Portrait...from Martha Jane Marley's Photo Album
Mert Carroll's Headstone...from my Collection...taken 2011