The old man spit apple seeds into the dust and watched as they landed beside the cast off spiral peel that the hot afternoon sun was quickly turning the color of cinnamon.

Apples reminded him of the boys that once upon a time stopped everyday on their way home from school.  It had gotten to be a habit, buying apples at Eudalys Store.  Especially when staples were needed more'n apples, but he got alot of pleasure telling the boys stories that most folks weren't interested in hearing.

Too bad, too, as they were the stories of a time long gone.  Ones that should be heard and told for future generations of the family he had been a part of for  too short a time.

Rocking back and tugging his worn straw hat down over his eyes, the old man allowed his mind to roll back the hands of time.  There she was standing beside the wagon. He would forever remember the sight of her.  Hands firmly gripping the pole that was wedged under the wheel that had sunken several feet into a mud hole, telling her younguns at the back of the wagon to push as she placed all her weight on the pole.
.

"Looks like you folks could use some help," he'd said to her as he stepped down from BigUn.  "We'd be obliged," she said as she pulled off the gloves to introduce herself and the children.  "I'm Martha Jane Carroll, and these are three of my four chldren, Merrett Douglas, Mary Ella, and Othello.  Stella is some miles back waiting for our cow to have a calf.  She'll be along soon."  He quickly peeled off his worn gloves and stuck his calloused hand into her offered one, and told her he was Bob Offield, a cowhand, on the ranch that she was passing through. 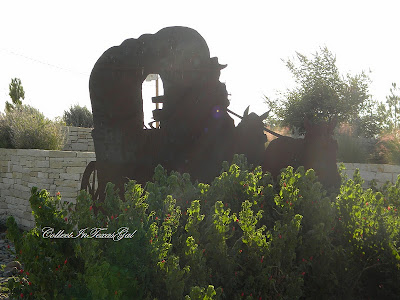 "Let's see if we can get you nice folks on your way, before nightfall.  It's shore gonna be colder than a cow's teat.  Oh, pardon me mamn, I only meant..."  She waved him off as she pulled her gloves onto cold reddened hands and said, "I know about cow teats Mr. Offield."

She instructed Ella to climb into the wagon and take the reins, the boys to the back and Bob to take charge of the pole.  She joined her sons and on Bob's count of three they all did their jobs and were rewarded with the wagon slowly moving forward onto solid ground.  As the children scrambled back into the covered part of the wagon to get out of the cold, Bob questioned their destination.  "We are on our way to Grandfalls.  About how much further do we have to go , Mr. Offield, " she answered with her quick question.  "Well, now, your jest a few miles from there.  This here's the Wristen Ranch Road that leads right on into Royalty, and Grandfalls is bout two miles on past.  I jest came from there, and the the road is purty clear all the way in.  You shouldn't have any more troubles.  Do you folks have a place to stay once you get there?"

He'd never forget the pride in her stance and the determined look she gave him when she answered saying, "We have this wagon that we have come all the way from Tom Greene County in, and I reckon it'll have to be home for a while longer.  But, thank you for asking Mr. Offield, we are much obliged for your help and directions."  At that she climbed aboard the wagon, took the reins and set the team of mules into motion with a flick of the whip.  He watched her pull away with his unspoken request still on the tip of his tongue, and his hat in his hand.  Not much left to do now, he thought to himself, but put youre hat back on youre old bald head, git back in the saddle and head for the bunkhouse.

The sun was dropping in the west and as it filtered through the battered straw hat, Bob realized he'd dozed off.  As he pushed himself up and out of the rocker he paused a minute to get his balance on legs that hadn't straddled a saddle in many years,  but still longed for and missed those days.  "Oh, Lordy", he said talkin to himself, " I sure was hopin' to ask her if I could call on her once she was settled in.  Never even entered my mind that she might have a man.  Strong, determined woman like her.  I figered she probably didn't need  or want one, but those were hard times for everybody.  Four children, a cow with a new calf, dead o'wnter, and she thought that old wagon would hold out a while longer."  Shaking his head at the wonderf of it all in his memories, Old Bob, let the screen door bang behind him.

Bob Offield was a cowpoke in Grandfalls, Texas around 1915 when my Great Grandmother Martha Jane Carroll arrived in Ward Counnty, Texas.

The above photo is from Martha Jane's Photo Album and is thought to be Bob Offield. Taken in front of Ott's Blacksmith Shop, C. Hale's meat market and the Grandfalls Hotel. This photo also appears in the Ward County History Book 1887-1977, pg.181.

Bob Offield and Martha Jane Carroll married April 1, 1916 and seperated in July that same year. It is not known if they ever legally diviorced, but Martha Jane never went by the name Offield.