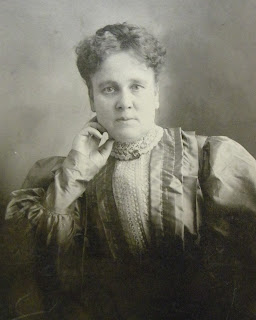 KINSHIP, some might think is 'Relative'...as in...
'We are 'Kin' because we are 'Family'.
If only it were that SIMPLE!
Take this woman, the subject of my second most intense search as 'SueLock Holmes'.  First, let me explain the reason for the photo...I'm a 'Visualist', and having a Face to go with a Name makes a person more relative to me, no matter how distant our KINSHIP...so from my Vintage Photo Collection...

...Meet my Affinity-Kin...by marriage...my Great Grandfather's second wife.  I wish I could say her name was KATE...that would tie in nicely with this post as focusing on 'The Letter K', however, her name letter is 'N'...and I may need it later, so for now,  she works as the lead in to...

The COMPLICATED Issue of KINSHIP.
In General Genealogical terms,  KINSHIP refers to folks who are related by 'similarity' (blood) or 'affinity' (marriage).    And in even more General/Simple terms based on Lewis Henry Morgan's Systems of Consanguinity and Affinity of the Human Family, our system of English-language kinship falls in The Eskimo Kinship Pattern.  Which generally classifies, describes and distinguishes Kinship in terms of Sex, Generation, Lineal (related by Direct Line of Descent) and Collateral (related by blood, but not directly by line of descent) terms thus distinguishing siblings from cousins. 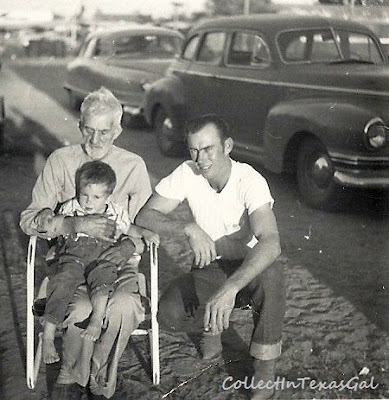 That is all well and good on PAPER!  However, if one wants to undeniably prove their KINSHIP to an Ancestorial Blood Line there is Y-DNA Testing,  Patrilineal or male-line ancestry.  This test is useful in determining a line of Kinship because the Y chromosome passes down almost unchanged from father to son....simply stated...it's a bit more complicated in scientific terms.  Anyway, a man's test results (done by a 'buccal swab'...cheek-scraping) are compared to another man's results to determine the time frame in which the two individuals shared a most recent common ancestor.  If their results are a perfect or near perfect match, they are related within genealogy's time frame.

Like I said...It's Complicated!  And to complicate things even further in my 'Affinity Kinship' with Step-Great Grandmother 'N', I discovered a 'Blood Line KINSHIP'.  I'll save that for 'The Letter 'N'.

For now, I'm off to 'Scrape my Brother's Cheek'....he's the little guy sitting in our Granddad's lap.  That's our Dad next to them.  Surely, his Y-DNA has fully matured since 1950...I know his cheeks have.