The Importance of Given Names 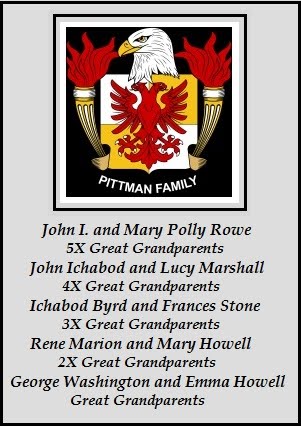 In genealogy we usually concentrate on surnames since they are the most important way of identifying people who are related.  A surname is usually inherited and, while it may be changed, some form of it is usually retained.  Given names are more important in a way because they represent a voluntary choice by the parents.

A name is usually not given lightly.  It represents thought and feelings and can be significant to the researcher.  Such is the case of my Great Great Grandfather Rene Marion Pittman.

His unusual given name of Rene was a source of speculation that led to assumptions landing previous family researchers in France.  The following is part of a post where that myth was debunked.

At the TOP of  the Pittman Family Branch, Irene had traced as far back as Rene Marion Pittman from Alsace Lorraine, France who came to America and married a Black Dutch woman...according to her notes.  Right off the bat, I'm wondering how a Frenchman...which could be with a name like Rene, got a surname like Pittman which I knew was not French, and how his wife could be Dutch and black.  (excerpt from Leatherwood-Pittman Myths Debunked)

What a surprise and significant treasure of genealogical information the name NAPIER has revealed.
Tracks of Rene Marion Pittman's Ancestors is the next segment of
Tracks of My Georgia Ancestors.
Introduction
America to Scotland...'Rene' the Link