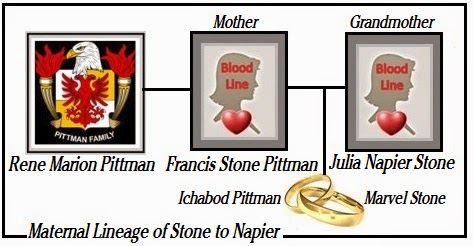 Matrilineality is a system in which descent is traced through the mother and maternal ancestors.  It is also a societal system in which one belongs to one's mother's lineage, which can involve the inheritance of property and or titles.


This Napier Patriarch line of research and documentation for Tracks of My Scottish Ancestors
continues through Rene's 14th Great Grandfather Alexander Napier.
I hope you will enjoy the climb up the Napier Family Tree with the story entitled...
Rene's Maternal Lineage to NAPIER Family Tree

Revealed there...
The Etymology and Historical Origin of the name Rene
Posted by Sue McPeak at 5/26/2014

This kind of thing has always interested me. I don't know my father besides a name and have always wondered how hard it would be trace back through that line.

Sounds like you could be a member of Colonial Dames - nscdaga.org/

Matrilineality makes sense. Aside from babies being switched at birth, you can be sure who the mother is. Not always true when it comes to the father.