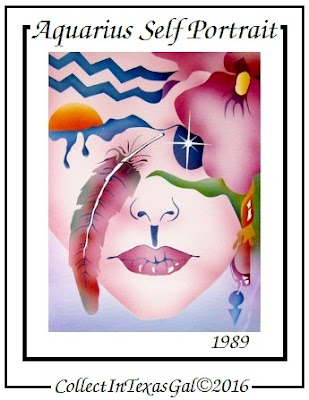 As the first Full Moon of the new year nears, my list of topics 'All Things January' wanes.  Rather than gearing up for a Full Moon Howl, I find myself a bit off kilter...out of balance with the stars.

Even my Daily horoscope advises to say and do things today with 'utmost care'.   Something about Mercury blurring the boundaries in my immediate environment.  Another warning....'Don't go out on a ledge'.  Yikes...and here I am feeling off balance.
Definitely not going near a ledge today!

Mercury!!! That quick silver element first found in Egyptian tombs dating back to 1500 BC.  Once thought to prolong life, heal fractures, and maintain good health, it is now known to lead to seriously adverse and lifelong health issues when exposed to through vapors and ingestion.

Although Mercury and it's compounds have been used in medicine, it less common today now that it's toxic effects are better understood.  Thankfully, I've only had two tiny amalgam fillings, one has been replaced and the other has held up for over 50 years...maybe it's to blame for my 'Off Kilterness' today.  I know...it's probably all in my head! 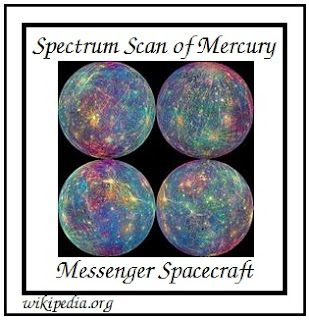 As for Mercury the Planet, it is the smallest planet in the Solar System and one of the closest to the Sun.  Since it orbits the sun within Earth's orbit, it can appear in our sky in the morning or the evening, but not in the middle of the night.  Like Venus and our Moon it displays a complete range of phases as it moves around its orbit relative to Earth.

Two spacecraft have visited Mercury...Mariner 10 flew by in the 1970's and Messenger, launched in 2004, orbited Mercury over 4,000 times in four years before exhausting its fuel and crashing into the planet's surface on April 30, 2015.

There ya go!
That's what we get for Messing with Mercury!

According to my 'Monthly' horoscope, things are going to improve when the Full Moon is in full bloom....beginning tomorrow...January 23rd.  Yep, I'll be 'Feelin' the Love, as the bond with HiHoney deepens.  That, I think is a given with the Celebration of our 50th Anniversary.  I'd say we are in pretty deep!

Once the Full Moon starts on it's waning path, so goes the rest of my month of being 'Off Kilter'.  More daily predictions of  handling everything with 'utmost care'...especially with my mouth...which I take to translate to speaking and writing.

an off kilter Friday is no fun. But you can double up the fun this weekend to make up for it. At least you shouldn't be shoveling snow like back east. Alas - I'm not keen on February...ever..and this one has a bonus day. Hope Mecury gets out of your way - it better! Have a good one

No snow shoveling predictions...thankfully. That's right this is a Leap Year...another astrological phenomenon. That will give me a February post to look forward to. Hopefully Mercury will drop to the bottom of the thermostat.

So THAT is why DC is ready to get 30 inches of snow and we in upstate New York: nada. (we hope). Strangest weather ever. Alana ramblinwitham.blogspot.com

That is a good explanation. Another 'Don't Mess with Mother Natures Mercurial Nature'.

Hi Sue - must come from the Capricorn practicality .. I just get on with things! If it was snowing that heavily... I'd hunker down til February came - thankfully I have no wish to wish my life away for a week - then I'll be happy! The light cometh with February ... and spring is springing forth ... Mercury -poor old planet mercury - the place to crash into - obviously no cushion available! Cheers Hilary

Yay for Capricorn practicality. I too am hunkering down and working through Mercury's influence on the rest of January. A 'Hearth Rug' on the Loom will be finished before another fire roars in the fireplace. No snow here in Texas. Yes, we certainly left a Messenger on Mercury...for all time!

Feeling off-kilter is disconcerting. I hope everything smooths out for your celebration!

Thankfully the Anniversary Celebration happened before Mercury tipped the Kilter Axis. In some ways, being off Kilter once in awhile makes one appreciate when all is in Balance.

Yeah...that bit of mercurial advice should be a 'mantra' with me...especially the 'Say' part. It is what often gets me 'Cracked Up'. LOL!!!