Who, Where and What Day of the Week 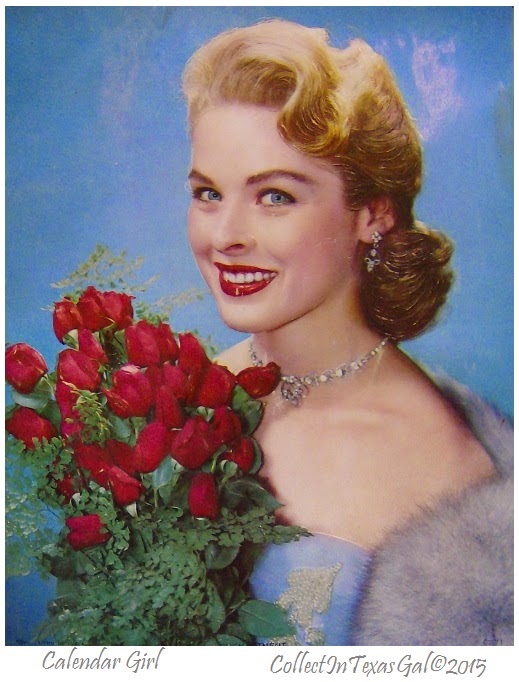 I started collecting January Calendars and/or photos of January Calendars just because it is my birthday month and the beginning of every new year. Surprisingly, I have found a good many with all 12 months still on the calendar and intact.

Today as I scrolled through my 'Vintage Calendar Collection' File with the intention of dropping it into the 'Seagate Storage Room' and out of the My Pictures File, I came across this American Beauty.

I wish I had the actual calendar.  Instead I have an off kilter photo taken at an antique mall where I must have had to stand on my head to get the shot.  The best I could do for a decent photo to show here was to crop the calendar and after a bit of photo finagling it is as square as it's going to get.

Isn't she beautiful?  Are those roses the reddest you ever saw...in January?  The color in this calendar has remained vibrant and the condition of the 'PinUp Girl' would be considered excellent in the Ephemera Collecting world....especially for a 54 year old piece of paper that was never intended to exist past December 1961. 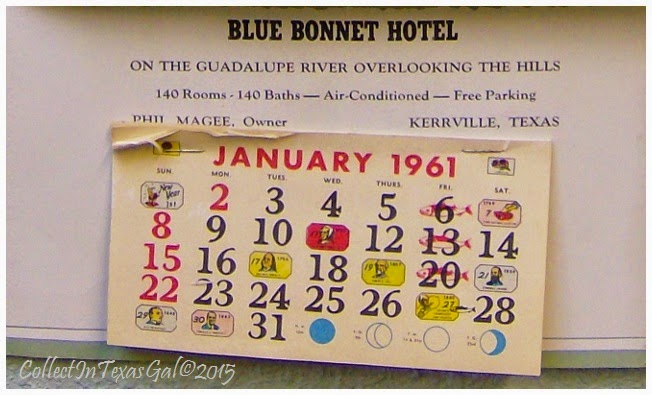 The actual calendar pages show their age a bit, but are still in good condition...even with the wonky staple job on the left side.  Advertising calendars range from single sheet year-at-a glance pieces to monthly paintings of the product in use.  Some of the biggest issuers included Coca-Cola, DuPont, Ford, John Deere, Mobil and almost all major railroads.  Pinup calendars, like this one, became popular in the 1940s and 50s.   After I passed up buying this one, I found out that 'Tear-sheet Calendars' with all the months intact, starting with January, command a premium in the Calendar Collector market.

Do you ever wonder 'Who What and Where' about certain days in your past?  You know I do!   Here's some 'Trivia' about this day 'January 5, 1961...54 years ago:
~The United States broke diplomatic relations with Cuba.
~Curt Bader, Bloomfield Iowa, was born.  He was a member of the 1996 Olympic Sprint Kayak Team.
~The astrology sign for this day and month is Capricorn.  The birthstone is Garnet and the flower is a Carnation.

~I was 13 years old, in the 8th grade, made all my clothes, and was taller than all the boys.
~My parents celebrated their 15th Wedding Anniversary the next day....January 6th.
~My brother was 12 years old and in the 7th grade.  He was a roughhouse kid and an embarrassment.
~One of my sisters was 11 years old, in the 4th grade and had to wear clothes I made for her.
~My youngest sister was 4 years old, had long pigtails, and loved all the clothes I made for her.  She still does...wink, wink sista!
~I was a basketball player.
~It was 15 days until my 14th birthday.


And that is the way it was for me on Thursday, January 5th, 1961.
What day of the week were you born?
Here's a website that will help you find the calendar you need.
What Day of the Week
Posted by Sue McPeak at 1/05/2015

What a fun thing to collect. I have a few, Christmas ones etc for the graphics and they have all 12 months on them so thanks for informing about the value. Enjoyed reading what you and your family were doing in 1962. I was 2!

Well, how neat is that!!! This post and your birthday...good timing on our parts and our parents. Happy belated Birthday!

you just have the best perspective of the world - past and present with very fun, unique stuff. I'm a Libra - gotta turn those calendar pages for quite a while to get there. I'll say Happy January Birthday now!!!

Calendars are fun to collect, but hard to display. I keep them in a FILE...wouldn't you know!!! Wow...you were two in 1961...very close to my sisters age. Thanks for commenting.

Thanks for the Happy Birthday...I plan to celebrate for the whole month. You can do that once you reach a certain age...for me that was a while back when I decided not to cook on my birthday. Liked it so much I made it work for the whole month of January. I'm working on February. LOL!!! LIBRA...oh you BALANCED person...great characteristic. I think you fit that well.

One great-grandmother, one grandaunt, one mother, and one sister -- all born in January. It's a good month. Happy Birthday!

Thank-you...seems I am in good company from your family. I wouldn't go so far as to say it's a good month for having birthday parties. Most of mine were cancelled because of a Texas Freak Snowstorm or a Common Sand Storm. LOL!!!

If I did the math correct, then today is your birthday. Happy Birthday!