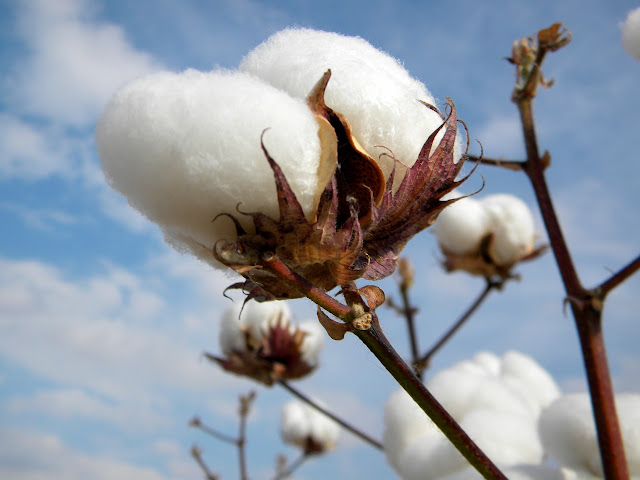 For generations of Texas Cotton Farmers, blue skies with fluffy clouds and fields of fluffy cotton bolls has been a sign for 'Cotton Pickin' Time'.  Many of my Texas Ancestors were Cotton Farmers in West Texas where Dry Land and Ditch Irrigation provided the water for cotton farming,  and Hand Hoeing and Pickin' provided the lively hood for farm workers and their families.

T.N. Brown's Gin
That's what is written on the back of this photo from my Great Grandmother's Photo Album.  Martha Jane Marley Carroll was a cotton farmer along with her father, Elisha Smith Marley.  After the death of her husband in 1903, she returned to her father's and brother's farms in Borden County, Texas.   I suspect that T.N. Brown's Gin was the cotton gin nearest their farms.  I've studied this photo many times and looked for signs that would hint as to it's location, and the only solid piece of evidence is the lettering on the chimney stack...Munger System.  (click on photo to enlarge)
If you are regular reader of CollectInTexas Gal and Tracks of My Texas Ancestors, you know that I love the detective work involved in finding my ancestors.  You also know that the facts of their lives often spark my 'Fact, Fiction and Folly' stories.  I just knew there had to be a story about T.N. Brown's Gin and why it was in my Great Grandmothers Album.  So, I Googled for some clues.... 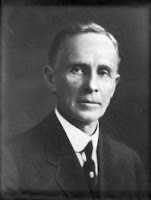 "Robert S. Munger, a young man operating his father's gin at Mexia, Texas from 1883 through 1885, conceived the idea of handling the cotton to the gins by air.  It would then be distributed to two or more gins in a battery with a belt distributor, using a common lint flue behind the gins to take the cotton to a battery condenser.  The cotton would then be moved to a double box cotton press."
Munger Gin Company Website
Photo ~ Robert S. Munger, 1854-1923, Inventor...Facebook 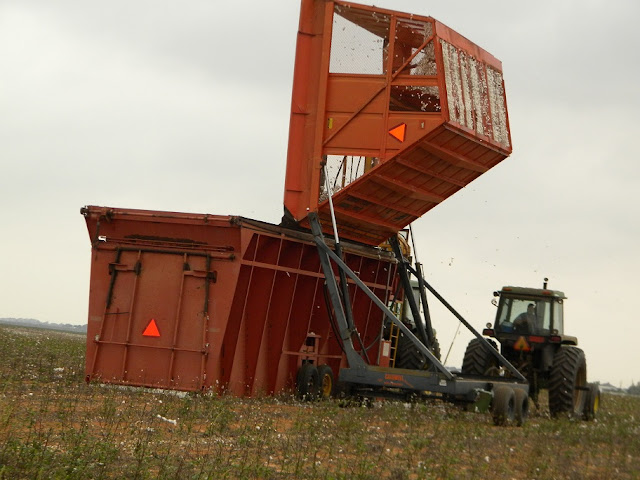 Fact is... Robert S. Munger was a hard workin' cotton ginner and an inventor.
Fiction is that if anyone would have told my Great Grandmother, her cotton farming Father and Brothers
that someday there would be a machine that picked, blocked, and delivered the cotton
to the gin via a horseless wagon, they would have had a good laugh and said,
'That's just pure Folly' 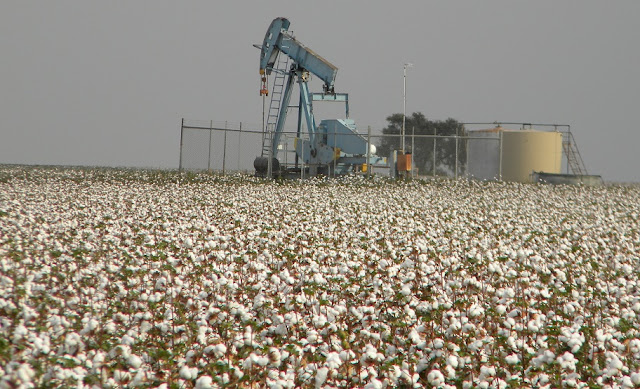 ﻿
Wonder what they would say about a Pump Jack in the middle of their Cotton Field?
Welcome Workday Wednesday GenaBloggers!

I can relate to cotton picking the old fashion way very well. I had to chop it and then drag my sack to pick it. Never will I forget those days.

I would imagine our ancestors would be very surprised at all the changes that have happened over the years. Isn't it fun to learn about them and what they were like.

Very interesting - cotton picking was hard work. We had cotton farms here in GA too! sandie

I'm a lousy field worker. Can you imagine working out in the heat? When I was a kid, I picked strawberries and worked at the tulip farm. I was lazy day dreamer then, too!

Just found your blog and all this is so interesting to me...since I am a Native Texan...third generation. I have relatives in Syder Texas. I am going to read around...enjoying my visit here.

My late FIL picked cotton in the South! He said it was back breaking work. We take a lot for granted don't we? I think of so many things I have that are made from cotton. It is an interesting process.

I am an Arkansas cotton farmer's daughter:)) As a kid I loved to tromp cotton. Cotton is my favorite smell. EVER.