AtoZ Letter A~All A's and One A-

They say everything you need to know you learned in Kindergarten, but back in 1953 there was no Kindergarten, no Pre-Schools and no Nursery Schools. 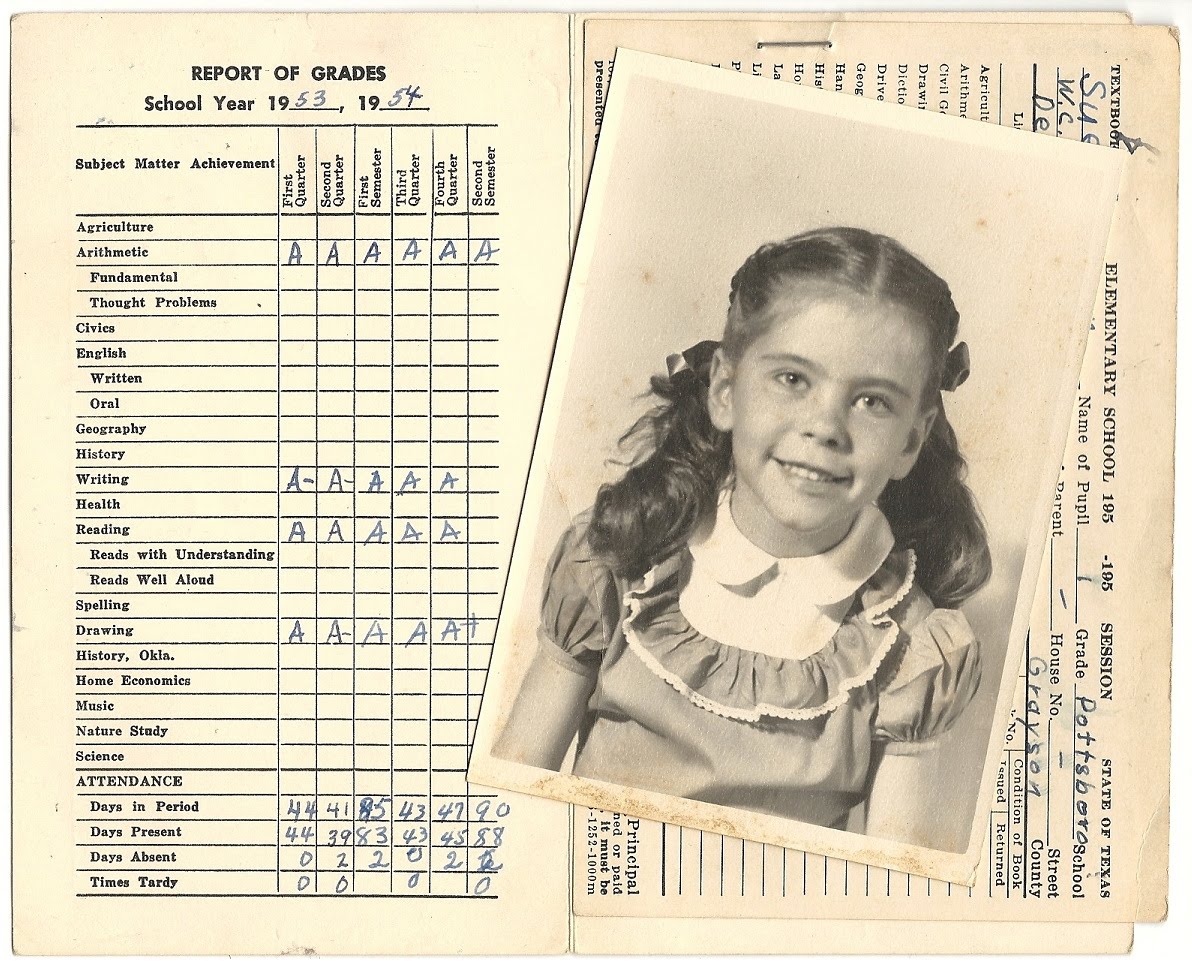 As strange as it may seem to today's Pre-School/Kindergarten generation, school in the 1950's started with...of all things...grade #1.

As the first and oldest child,  my 'Pre-School Prep' for grade #1 was done at home with the ABC's and Counting learned the old fashion way....I was Number 1, brother was Number 2 and baby sister was Number 3.  'A' was for Apple, 'B' was for Brother and 'S' was for Sue and Share.  I preferred the first 'S' word and resented the 'B' word for ruining my only child status and cutting in on half the apple.  From that day forward, I never was any good at fractions.

With the basic ABC's and Counting 1-100...that might be stretching it a bit...and having blown out 6 candles on your last birthday you were pre-school prepped for the First Grade.  Oh, and there was the 'Shot Record'.  You had to have your Small Pox Vaccination.  The one that left a big scab...then a quarter size scar...mine ended up as dime size on my shoulder even though they poked my upper arm. Some kids had to wear a plastic cup over their scab...I didn't...maybe that's why it ended up on my shoulder.  Who knew that cup kept the scab from traveling.

I soon learned there was more to the Letter A than Apple.  Imagine my confusion when the teacher insisted that 'Counting' started with the letter 'A'...Arithmetic.  I could hardly wait to get home and educate my Mother.  It took the first six weeks just getting used to associating 1-2-3-4-5 as Arithmetic, that the word Grade was really numbers 1-2-3 and so on, and the word First and number 1 was best.  Then we got The REPORT CARD.  Guess what GRADE I got for Arithmetic...Apples.  So much for the letter A not being called counting and the word grade not being a number.  I was not used to being anything but #1, and First Grade was a bust.

To further confuse a home school prepped first grader...some A's on the report card were fractioned.  There it was an A- in Writing.  Even my counting enlightened mother could not explain what part of A was missing.  So, with the first 6 weeks of learning higher math and writing words that started and ended with A...and other letters...under my belt, I concluded the 'writing A-' had to have been about the Apple and note...

Now that I look back on the writing of that note,  I am amazed at how ahead of my time I was and why the teacher gave me an A- in writing....
She had not heard of Texting!
Posted by Sue McPeak at 4/01/2015

hahaha. Great post. I'm also of the grand year of 1953. We had a kindergarten but for some reason the Mama didn't put me in it. That's okay. I think I learned a lot more from the Mama since I could read the words under the stick figures on my first day of first grade. I couldn't understand why the teacher was making such a big deal out of the words.
Take 25 to Hollister

LOL - the note :) What a great set of memories. The thing I remember most about starting school was when we had to draw around shapes and get as many circles on a page as we could. I think it was supposed to teach us spacial awareness :).
Tasha
Tasha's Thinkings | Wittegen Press | FB3X (AC)

I started school in the 60's and our little country school didn't have kindergarten either so I started first grade at 5. Except for writing my name, I didn't know anything. And I was a baby boomer so our poor teacher had 30 kids stuffed into a small room and all levels of ability and no help for even special needs students. Times have changed.

Ahaha, she had not heard of texting. Makes perfect sense. You were just ahead of your time!

Good luck with the 2015 A to Z Challenge!
A to Z Co-Host S. L. Hennessy
http://pensuasion.blogspot.com

Ah, you brought back so many fun memories! We lived in Turkey when I turned 4 and my mom was a kindergarten teacher for the DOD school - so I actually had 2 years of kindergarten. Don't think I'm any smarter but had a blast in her classroom! I'm looking forward to reading more each day!
Cheers, Sue Kuentz, Power of Story Blog (storytelling), http://www.door2lore.com/power-of-story-blog

Thanks to my 'Save Everything Mother', I have report cards and more from most of my school years. Glad you enjoyed this post. I should have gotten E's for eldest, too. We can relate on much of the same things as oldest child.

Thank goodness for our Mama's...they taught us so much more than just our ABC's. Neat that you could read words on your first day of First Grade.

Thanks for reminding me about the drawing of basic shapes. Yes, spacial awareness...that was certainly important when standing in the lunch line. My how 'Spaces' have changed over the years.

Poor teacher...30 kids in one small country school room. I bet she was glad you could at least write your name. I imagine you were a fast learner and became a teachers helper. I remember getting to help the teacher...it was special to be chosen and probably led to many of us becoming teachers. I hadn't thought of that before. Yes, times have certainly changed.

Since becoming a 21st Century Texter, I often think of how my teachers would be horrified at my spelling and grammar. It's one of the reasons I like the auto correct thingy on my phone...it puts the words in my mouth in the text...properly.

How interesting and a unique experience to have started school in Turkey. Having a mom for a teacher is truly a unique experience for both...I taught my son in elementary and middle school. I'm not sure he thought it was a blast....he spent sometime in the principals office with my name signed to the discipline slip.

great start to A to Z. I started kindergarten 1/2 day at age 4, but could read decently. Not sure about the math, but got better as the years went by. You get an apple for this post

First day of first grade I told my teacher "That's not my desk." She had our names taped to each desk. I had been taught to write my name "Barbie". No one had ever called me Barbara. I was humiliated to find I didn't even know my own name when I got home and told Mama all about the horrendous mix up at school.

I remember kids with that plastic cap on their arm. I also remember that the vaccination itched like crazy.
Stellar start for AtoZ. See ya tomorrow!

Wow! reading at age 4...that explains your long love of reading and the written word...which by the way...you are very accomplished. You did notice that I was an accomplished 'Texter' before Texting was cool? It is why I'm an awful speller, but good with spell check, the auto thingy on phone and Word and some http/:<"a> code stuff. LOL!!!

I can so relate to your wrong name story. My first name is Sandra. Didn't even know how to spell it until high school. Was counted absent first three weeks of college English cause I signed in as Sue. To this day, if anyone calls me Sandra, it does not compute.

It sure did itch! I got my hands slapped a lot for scratching that scabby thing. Of all things to remember about starting school...LOL!!!

Great start for A to Z! I think school is often confusing those first few days . . .

It certainly could have been back in 1953. Today, with pre-school and pre-K under their belts, first graders are better prepared for the schedule and expected behaviors.

I'm of 1956 vintage and I DID have kindergarden. Maybe because I was in Sheffield, MA.
Your scar traveled? That is so weird!

Regarding the "math" of grades -- I made lots of complicated charts with the grade weights and point values of the entire range from A through to F. My fellow teachers hated me because they had to fill them out. I teach in a different department and no longer bother since I'm not supervising anyone and only have one final project to grade. Thank goodness!

Yeah, it is weird...the traveling scar. For years I had to present my shot records as proof I'd had the vaccine since my scar was not where it was suppose to be. Wow...grade charts with variables of A through F. As a teacher I probably wouldn't have liked you either...but we would be BFF's if we could swap chores...I'd do all your mending and zipper fixes for your figuring fractions and doing math word problems for me

That was such a fun post. Love the letter in the end - you were ahead of the times. Super like this post. Thanks for visiting mine.

Glad you came by, Suzy, and enjoyed my trip down First Grade memory lane.

Very fun photos and stories. I'm loving your A to Z posts!

Thanks Marcy. It has been fun going through the photos, remembering and writing. I am enjoying your Family History AtoZ.

This was so cute. I think I have all my report cards around here somewhere. I went to kindergarten in (I think) 1956. We had to be 5 before September 1 to get to go. I don't remember doing anything more than playing. When I got to the first grade and I started to learn to read I felt as If I had died and landed in Heaven. Love reading still to this day!