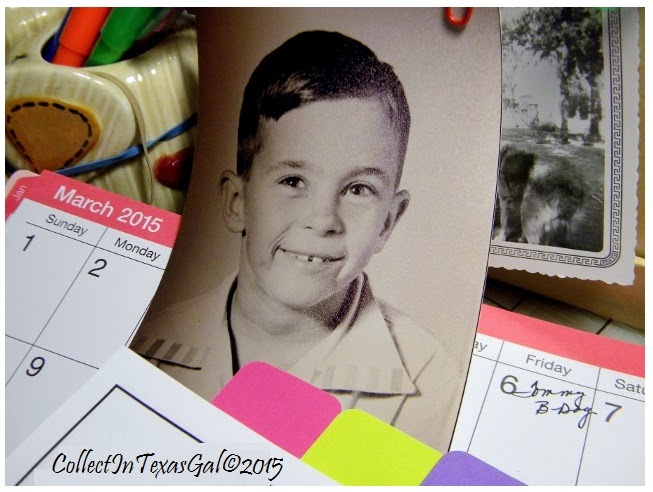 It is almost March!  There are lots of things going on in March for me, and I  am looking forward to the next month of 2015.  Typically, March is a windy month in Texas...as it is elsewhere, but after the erratic February weather that Texas Mother Nature has hurled at us, a little wind will be tolerable.  I say that in a whisper so she won't get her panties in a wad and blow us off the planet.﻿

Do you remember the last Leap Year on the calendar?  I didn't so I looked it up.  It was February 29, 2012.  That means the next one will be February 29, 2016.  That's right, it is next year, and it's on a Monday.  Won't that be a day to start the week or one's life.  I can't think if I know anyone born on Leap Year.  Do you?  Certainly no one in my immediate family has a February 29th birthday, and far as I have researched or noticed, none of my ancestors did either.  But...March...now that is a different story. Brother has a birthday in March...as you can see on my desk calendar book.  His birthday was always fun to celebrate when our Uncle MD was living.  They were born on the same day and often celebrated together.  It was always fun because MD was fun.

From the photo of us on his 4th Birthday, you might assume there was several years difference in our age.  Not so.  We were 13 months and 6 days apart...except on Leap Year.  I looked older than 5 in this picture.  It's because I had longer legs than him.  That turned out to be the case until we were 19 and 18.  He shot up what seemed like...overnight!

You will see him in many of the 1950's photos I will be using for my AtoZ April Challenge where I will reveal my THEME for this year on March 23rd.  As a regular reader here on CollectInTexas Gal, you already know that this will be my FOURTH year to participate in AtoZ.  Doing so has given me the opportunity to write about my Family Tree, the Lone Star Quilting Bee and Fiction From Forgotten Fotos.

If you are new to the AtoZ April Challenge event...you can learn more by clicking on the 'Badges' below or on my Sidebar.  Check them out...you are welcome to join in the month of April's Blogging Bash! 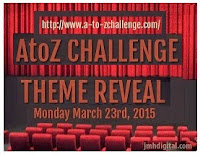 Hi Sue .. I suspect this won't be right ... your A-Z will be about collecting family and not forgetting them as time goes by. It's not far now .. and you've got to get through the winds of March ... I have another few weeks til I can reach my toes!! But I'm getting geared up for April ...

I'll write about the buried jewels shortly ... so don't check up - salient info will be provided soon ... it's an amazing story - even more because there's a cheese link too ... I know my threads are interesting aren't they?!?!

Cheers enjoy the end of cold February, before windy March kicks in and then dazzling A-Z April! Hilary

There are 10 birthdays in our family, or very close friends in March. April is almost as bad. How is the snow? It's headed our way on Saturday/Sunday.

I'm okay if March comes in like a sunny lion and goes out as a sunny lamb. (Hush - a little wind is fine).
I look forward to reading more of your goodies

You are right, Hilary...AtoZ 2015 is indeed about my family and preserving those memories for future generations. The older I get, the more I realize that I may be the only one who remembers much of what my mother captured in her photographs. This year I'll be saving the photos and memories of our family in the 1950's and 60's. It should be fun!

I will watch for your posts on the buried jewels. An incredible story I am sure.

March and April are big birthday months for us, too. We do have a bit of snow...more sleet and ice, tho. Temps in the 20's and 30's are keeping it on the ground. Staying in and staying warm. Hope you are as well.

I'm hoping for a sunny March, too, and yes, a little wind is fine. I saw your snowy pics! You got lots more than we did. Stay warm until the sun shines again!