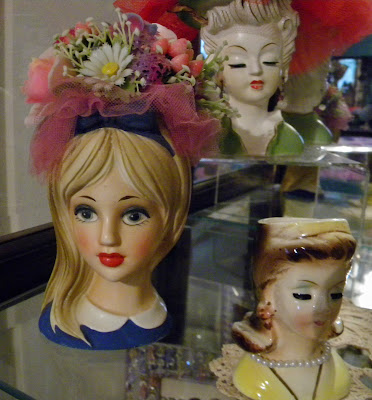 They made their debut in the 1940's in the Floral Industry as vases for flowers.  How special it must have been to receive one for Valentines.

Back then, few would have anticipated the current popularity of this commodity which, for decades, florists used as inexpensive enhancements for their bouquets. Indeed, what today we usually refer to as "ceramic planters" or "head vases," was often then generically called "florist ware." Neighborhood "five and dimes" were popular sources for the more affordable pieces.

During the 1950's, the Floral Arrangements were often Faux Flowers made of plastic and embellished with netting and ribbon.  These are rare finds today, as many people now look upon plastic as cheap, and have thrown away these original flowers. 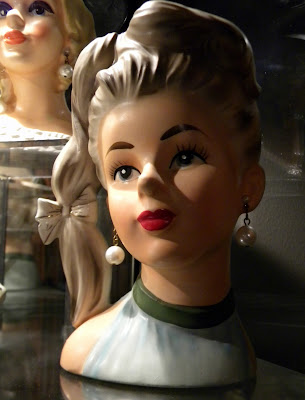 My first Headvase was found  behind a toliet in what at one time was a Beauty Shop.  Big Hair and Little Heads is a post about Her. I call her my Potty Bootty.  She is from the 1950's, made by Caffco and today is valued around $400. 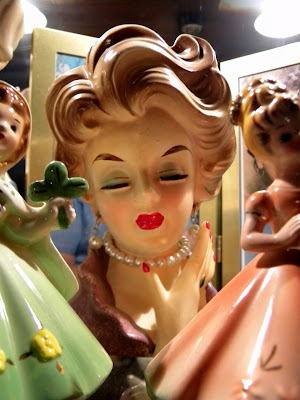 Head vases were made in a variety of designs. But it was the elegant, fashion-model look that quickly became among the most popular. Flourishes such as faux-pearl necklaces and earrings, hair bows, eyelashes, and applied textiles became the norm. Glamorous movie stars and beautifully coiffed fashion models inspired many of the designs both here and abroad. One novel approach, which quickly became commonplace, was the addition of a well-manicured hand. Positioned so as to be stroking the face, this gave a touch of feminine elegance to the piece. 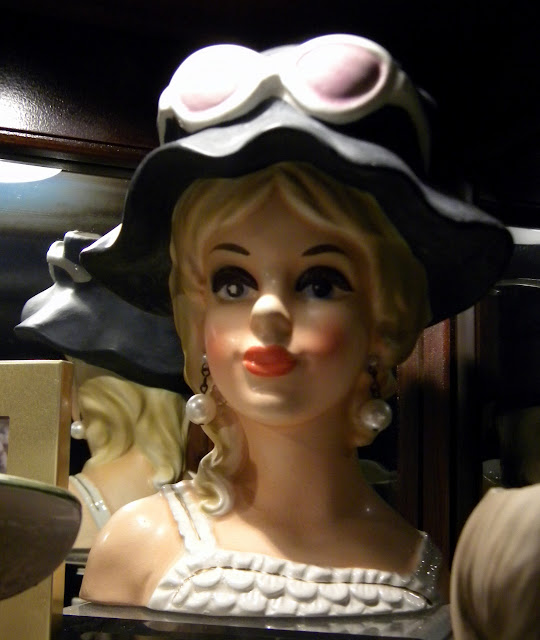 Today, head vases of all types have become very collectible. Those which originally sold for only a couple dollars each now command many times that. Pieces depicting well-known personalities, such as the popular Jacqueline Kennedy by Inarco or the Disney character series by Enesco, are often most highly prized.  Imagine my surprise to find that this Sweetheart of a vase is  listed as one of the Rare Prizes.  The market for these ceramic pieces peaked in the mid-60s. By this time, designs had become simpler, often smaller, in order to reduce costs and increase profitability. Whereas many early head vases topped 8" in height, newer ones were often only 3-4" tall. 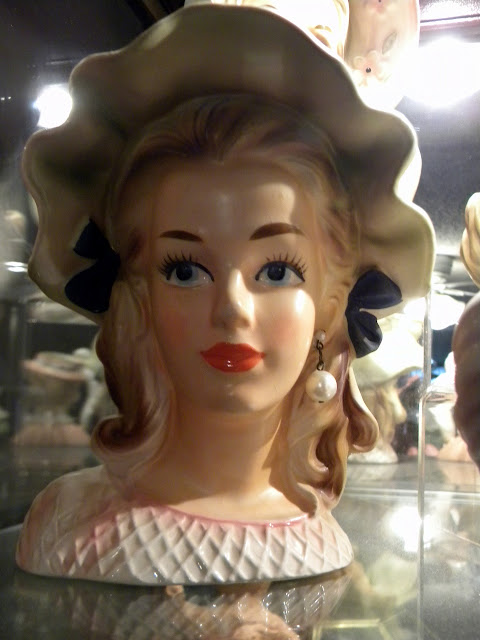 While many head vases can be identified by their hallmarks (which may be part of the mould itself, painted directly onto the item, or applied as a sticker), others have no identifying marks whatsoever. Often only the style of the subject's hair or clothing attest to the item's age, if not its manufacturer.
Posted by Sue McPeak at 10/03/2012

They are so fun! Love the earrings:@)

HI Sue!
It's fun to see your head vases again!

What a great collection ! I love seeing the head vases.
Welllll I'm not doing anything yet. Will have a Pink Saturday post, if not for those I don't know if I'd make it :)
(())

Oh I remember when I broke my arm as a little girl, people sent me flowers in head vases. One thing I did not keep!

Love your collection, Sue! My own collection has recently grown to THREE!!! (0; I keep an eye open for them at yard/estate sales, but no such luck. Even my beloved milk glass finds are slowly getting harder and harder to find; and when I do, it seems people's prices are getting a little higher and a little higher.. Oh well, much of the fun is the thrill of the hunt, right?... Enjoy your day, and I'm looking forward to seeing more of your collections soon! ((hugs)) ~tina

Oh, I so envy your terrific collection of head vases! The lovely lady in your third photo with the upswept 'do and ruffled collar is so elegant. And I got quite a chuckle from your potty bootty story!
In all my years of yard sale-ing, I don't think I've ever seen one but I sure will be looking next spring when I cruise the sales :)

P.S. Thank you for stopping by and your note about the apron pattern. I'm thinking about it!

Beautiful collection and I really enjoyed the history you provided. I always bid on these at auctions and I never bring one home because the price just goes too high. Wish I would have looked behind more potties in the past!
deb

Beautiful collection with such a variety of styles! I remember giving a head vase to my Mom for Mothers Day when I was a child; she still has it. I enjoyed reading the history you provided. It always fascinates me to think about how certain things become collectible.

Love those vases! I've never seen them before and I used to collect all kinds of 50s stuff.

My mom had one of these! Oh I would love to have her but sadly who knows what happened to her! Sigh!
How do you store all your treasures? You have such wonderful collections!