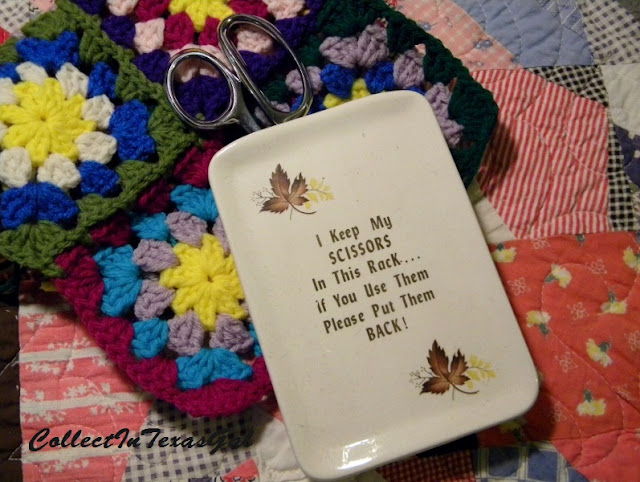 Vintage Scissors Wall Pocket
Gingher Dressmaker Shears
These belonged to my late Mother-in-law who bought them probably in the 1960's and never used them.
She was one who put away her 'Nice Things' for a rainy day.
I love using them to cut fabric...which is often...to remind me of a 'Special Woman' in my life.
1930's Scrap Quilt
One of many 1930's Tops I have restored, repurposed and quilted.
1930's Quilt Show coming later in '31 Days of Collecting'.
A Gift for YOU
Notion Quip Photography
by
CollectInTexas Gal 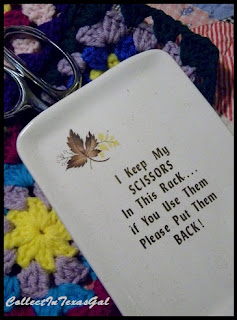 My mother threatened us kids within an inch of our lives if we EVER used her scissors for crafts. She would not have needed that holder!

I'm very particular about my kitchen scissors and get very cranky if they've been used and not returned!

I'm always telling my husband, who can never find his glasses, "If they aren't on your face then put them in their case." So I think this makes total since, but I still hide my good scissors.~Ames

I love a challenge! but I think I'll pass on showing off my collectables (hehe) I have to work on some socks.

And yes, I have my scissors in a certain spot and they better be there when I come lookin' for them!

Love that you're using and enjoying the scissors:@)

Sue, what a great way to spend the month of October. I can't wait to see all of your goodies - and I know that you have goodies.

Even though I am not a "sewer", I don't want people messing with my scissors either. Love this post. Now on to #2.

I like to use my 'nice things'. When I first moved out of the house, I would serve coke in my crystal, and eat chili dogs on my china. Everything tasted better when using those dishes. Since my budget was so small, I needed all the help I could get.

Somewhere in my storage I have a pair of left handed scissors my mom bought me in high school for sewing! I know those set her back $$! I need to get those in a safe place! She bought them at the local fabric store so many years ago!