Yes, Jane Dear, I did it on purpose. 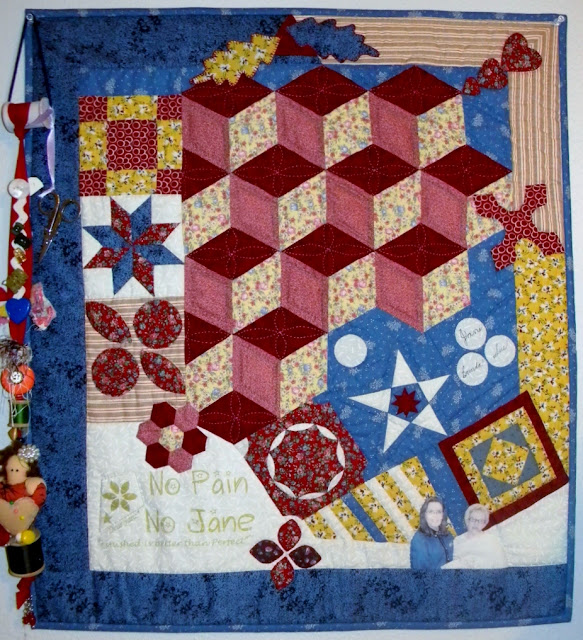 Forgive me Jane as I list the other Alterations of my Dear Jane 1860's Quilt:
...20th Century fabrics rather than 1860's reproduction prints.
...flip flopped and angled blocks rather than row by row.
...reduced number of blocks from 225 to 10 of yours and a couple of mine.
...there's more, but that's enough for now...I'm sure you are already in 'Shock'. 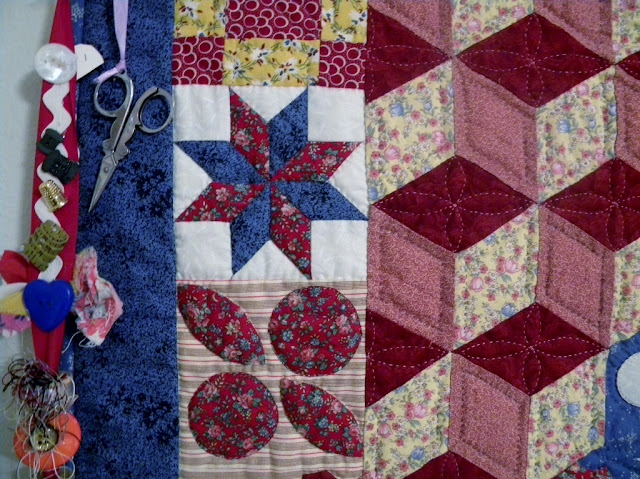 I can explain, Jane.
Several years ago...not in your time, but in mine...the opportunity came my way to take a Dear Jane Workshop and Lecture.   With the lecture and introduction came instructions not to think in terms of completing or even come close to making the 225 blocks in your quilt.  Rather, concentrate on the techniques that the Instructor had spent hours and hours in making patterns of your 4 inch blocks...which rolled over into several books, a CD, a line of 1860's reproduction fabrics, and more. 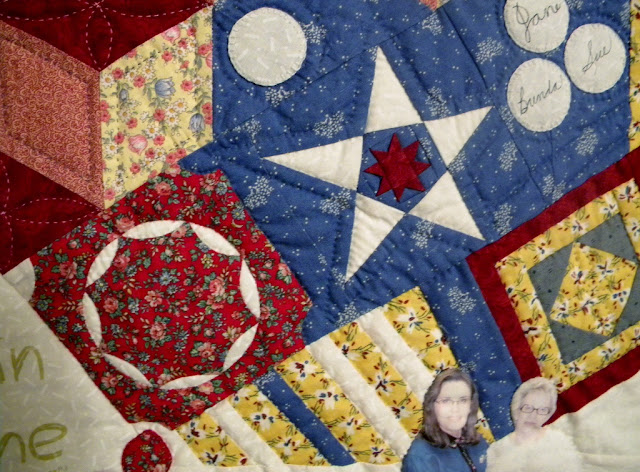 Before I go any further with my 'I can explain, Jane',
take a look at how your 1863 Quilt  has made an impact on
Quilters in the 20th and 21st Century.
Dear Jane Home Page
Okay, back to 'Sue's Baby Jane' Quilt. 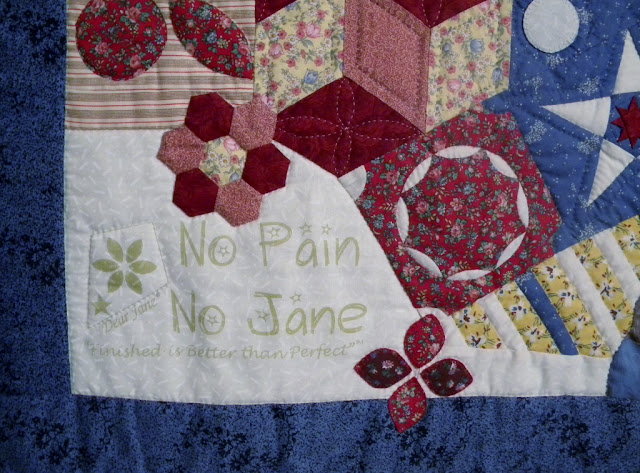 Although I'm not a 'Perfectionist', I am a 'Picky Piecer'.
I've been known to be a notorious Multi-Tasker...20th Century term for 'Lots of Irons in the Fire'...however,
I am a Finisher...eventually!!!
So you can see how I would latch on to Brenda's world famous Dear Jane Catch Phrase.
"Finished is better than Perfect" 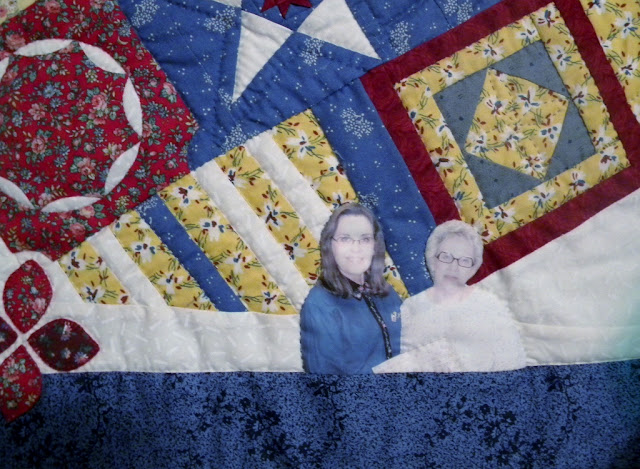 Now here's something that will really 'Shock' ya, Jane!
Yep, it's me and Brenda fabricated and stitched right on my Baby Jane Mini-Memory Quilt!
Like I said earlier...it was a few years ago in the 1990's!
Quilting has come A Long Way, Baby...Jane!
Linking To

I think Jane would be pleased! What a cute version.

Thanks for sharing your beautiful quilt and the story of it.

The quilt is beautiful and perfect for Sally's Blue Monday!

Happy Blue Monday, sweet Sue. You definitely are a finisher. You know how to do everything! And, this is another beauty of an accomplishment.

Glad you finished it!

I love your quilt and seeing your other posts. xo Jenny

I love the look of the quilt and the pain jane!

Hope that you are well Sue!

What a fun project. And I love all the word play in this blog post. It's so Sue to the n-th power!

What a great interpretation of Dear Jane! I love it.

Thanks so much for your kind comments. I love your work and your blog!
deb

Amazing! How did you quilt yourself on the quilt? Would this be considered a crazy quilt?~Ames

So much of this post I enjoyed...No Pain No Jane brought a chuckle although the words "shrunk your quilt" brought a gasp -smile-. The best words..."finished is better than perfect"...TRUE! and my new favorite phrase, thank you muchly!

When I think back to how you jumped on the wagon to help with the quilt for Shannon's family, I smile! I am so truly grateful for every single person that pitched in! I know we gave her family a bit of comfort if nothing else to remember their sweet girl!
You lady are too talented for words!
I love looking over your posts and reading your words!