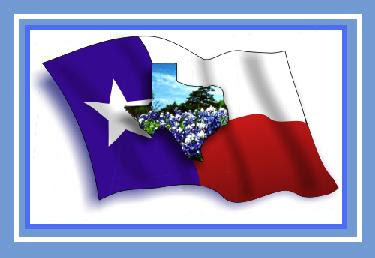 Here I am on the BlowinRoad Trip.  Left the BlowinWestWinds for the BreezyBlown of South Texas.

Along the way, which in Texas is a loooong way, the Grays of the West faded with the miles, and the Greens of Spring were keeping true to the TimeChange of Springing Forward! 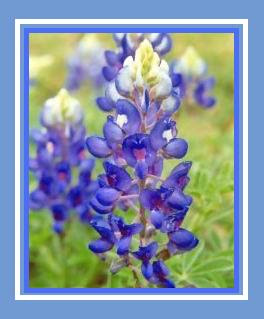 The Bluebonnet is the State Flower of Texas.
It is considered a Wild Flower and floods the fields and grassy areas of most parts of Texas.  I say Most parts....cause in West Texas it is a sparse and short season for Bluebonnets.
So, guess what flower this GRIT does NOT have in her flower beds or grassy lawn, that have been randomly sown with seeds guarenteed to produce the BiggestBonnets in Texas.

That's riiiiight.  No Bluebonnets!  Whereas, others can grow them in the cracks of the sidewalks and along the curbs and pavement where they are runover, flooded with gunk and hacked out by the City Pothole Crew.  Who BTW, need to go back to Pothole School.

Conclusion....I'm going to jack hammer my sidewalk, dig up the pavement, throw out some seeds and flood with road gunk water. 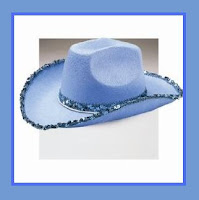 PS...I do have a BackUp BlueBonnet for Easter!!!

Just in case the Pothole Guys somehow get their PotholeAct together and permanently cover up my new BluebonnetBed!

Hi Sue! LOVE your cowgirl bonnet!!!.. and sorry about the ones missing in your garden flowerbeds! Wishing you luck with those, as maybe it's just early yet. Maybe Sherry, from Country Wings in Phoenix can send a couple of her garden fairies over to help speed things along a little! (0; Now I've learned something today though! I would have guessed yellow roses (from the song) were your state flower, but now I stand corrected! ~tina

I love Blue Bonnets! I can hardly wait for them to start popping up aroung the Lake house, I threw out a bunch of seeds last fall, and I just recently planted some seedlings!

They are such a pretty flower ...
Happy Easter!
Have a great day.
TTFN ~ Hugs, Marydon

They are a beautiful flower! I hope you can get some to grow this year!

You know this GRIT love Blue Bonnets! Heading on a trip next week with the hopes of seeing some!!

Love your Blue Bonnet! I may have to borrow it since my favorite color is blue. Do you think it will fit me?

Hi Sue! Oh, how I love to see the pretty Blue Bonnets along the highways! When we lived in New Mexico I planted a package of Blue Bonnet seeds and of course they came up and spread and spread and darn near took over the back yard! I never did want any more. :)
Thanks for popping in to see my little Carter.
Be a sweetie,
Shelia ;)

I love seeing the pictures of fields of bluebonnets. They are gorgeous.

I'm glad you're having a good time.

Luv the hat! My mama bought herself a pair of genuine leather blue western boots at the age of 60 and yep she wore them in the house with her flowered mu mus. She did. Some gals just know class. XXMollye

Hi Sue, I bet you think I dropped off the face of the earth. Nope, but I have been running the roads like crazy in Florida. First a bloggy break then a trip to FL. Busy, is an understatement. I have been missing you.

I think Dana, from 'A Stone Rabbit,' is going to Blowin too. She has bee talking about a trip to Texas for a big show??? Wouldn't be funny if you were both there and didn't know it. Dana is a delightful blogging friend of mine who lives in Missouri. Just thinkin!!! Smile.

I LOVE blue bonnets but I have never seen them in person. I would love to though. Maybe one day. I once posted a poem my sister wrote about my great niece running in a field of blue bonnets. She was about two and adorable. Her eyes were the same blue color. Beautiful. I will send you the link when you get back home. I hope you grow blue bonnets soon.

A big hug from Florida. I will be home in NC next Monday.
xoxoxo
Jeanne

Oh, I love Texas bluebonnets. And your blue cowgirl hat is darling!

What a wonderful idea for gardening! Just fill the potholes with seeds!