It's been a 'CheapPink Week'!  Not that this GRIT thinks Pink things are Cheap! 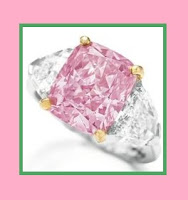 Ah Contrary...just look at this PinkThing that came outta what ya might call cheap dirt, but was definately not 'DirtCheap'

HONG KONG (Reuters Life!) - A rare, 5-carat pink diamond was auctioned off for a record $10.8 million in Hong Kong, putting some shine back into the world's rare and large stones market which was badly hit by the financial crisis.

"Badly hit by the financial crisis"...Ha!...they should be shopping in Texas markets with this GRIT's coin purse for PennyPinchinPinks!


Yep, I definately hit PinkPayDirt this week at the Biggest Thrift Store in Texas.  Right here in SanAngelo.  It's called Christians In Action or as Mr.CITexas calls it The CIA.  Now, just cause this is CheapPink Stuff, don't think I didn't have to do some SuperSuSleuthing and Inspector Gadgeting for these Pink Treasures. 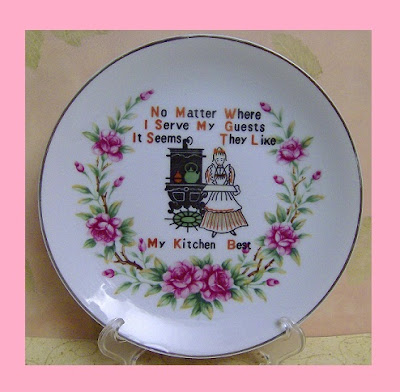 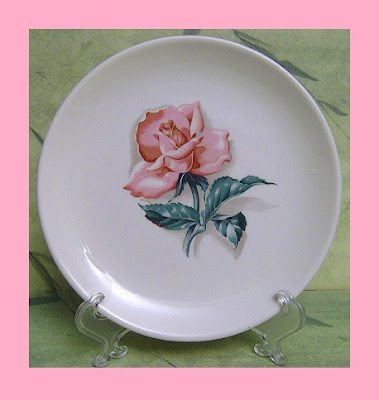 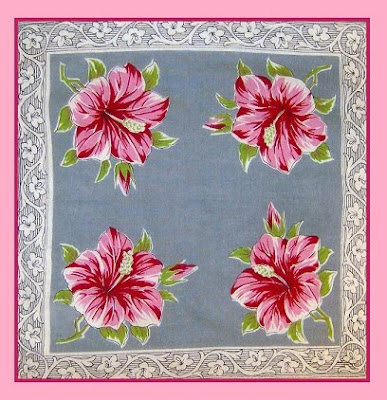 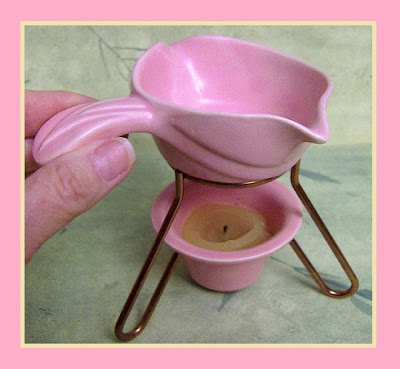 Yep, you can call me SuLock Holmes after the digging I did  for the Rosey Kitchen Poem Plate, The Pink Rose Saucer and the Hanky.  However, I'm Inspector Clueless about this Pink TriPod Warmer Thingy.  It is marked MiraMar with a copyright mark and 1955 on the bottom.  So all Ya'll RetroIsta's....What the HeckIsIt?

PS...Don't Ya'll just Love Pink Saturday Treasures?
Look what Ann at Tin and Sparkle found at an Estate Sale. Stop by and see her Treasures and tell her CollectInTexas Gal sent you.

Hi there! The little pink thingy is a butter melter/warmer - like if you wanted to pour warm butter over corn on the cob or dip a bite of lobster, etc. in the melted butter. So, me thinks maybe you bought it just because it was Pink??!! I understand.

I LIKE THE FIRST RING, BUT THINK I WILL PASS ON IT TODAY. Can you imagine?
Like your other pinkies, specially the butter warmer.

Have a great day.
Barbara

I love what you bought at the CIA. Of course, the ring is pretty special....

Have a GREAT weekend

HI Sue! I like that pink syrup warmer pot! That's what I think it's for. Time for pancakes! Happy Pink Saturday, friend!

Oh, my. Are you in the San Angelo with all the outlets? I was shopping there last summer when we stayed in Austin for a couple of weeks. If so, and had I known there was a THRIFT store, that would have been on my LIST!!! Oh, no, did I miss it?

You are a good SuLock Holmes!! I love the pink rose plate! Nope, don't have a clue what the pink warmer thingy is... could it be to melt butter?

All of your pinks today are outstanding, sugar, and yessssss, that new pink apron is adorable. Isn't it fun to make them? I love doing it and just hang them around the kitchen for "eye candy" until they sell.
xoxo,
Connie

In Shoes We Trust,
Maggie Mae
"Do these shoes match this purse?"

Fun PINK thrifty items! You had a good time!!! This etsy shop work IS a lot of work...hopefully for both of us it will be worth it! Have a great week! Coralie

Hankies! Ah...those were the days! We use to buy my daddy white hankies for the holidays as children. I also had some pretty ones with hand crocheted trim from years gone by and they did too! :(

You always make me smile! I need to go see your etsy shop. Best wishes to you there!

Uhhhhhhhhhh could it be one of those little pots you heat water in and pour it in your nose. ya know I'm just sayin one of those gadgets to clear your sinuses? Just a wild guess.

C'mon over and see who your Bunny Swap Partner is! XXMollye

You are so funny! I love all your finds, wish I could have gone to that big thrift store with you! Happy Pink Saturday!

Oh I love all your pinks but my favorite is the little butter warmer~ So nice!!

Happy Pink Saturday SueLock Holmes...
I adore this post as always. So darn stickin cute you are. Now I love that PINK DIAMOND, but the plate has my heart. I have seen the little kitchen one hanging in great aunts home many, many years ago. I loved it then, still do seeing yours. How precious Sue, just precious.

The little butter warmer is a treasure. I would think you would use that many times over. I have never had one, but with all sorts of foods it would be delicious for sure.

Have a beautiful Sunday sweetie. Country hugs and much love...Sherry

Pretty pinks and I think that's a butter warmer too! Or--you could heat some syrup for pancakes or waffles? Either way, it's really unique and cute! Happy pink week!!

Thanks for giving me a shout out on your blog. I love all of your pinks too. I was looking at the swap list and I think that you are partnered with a different Ann. I'm partnered with Gwendolyn at A Charming Home. Please let me know ASAP if I'm wrong. Have a happy Sunday.
Ann

Hi Sue, thanks for stopping by today! Love your pinks for today..I have quite a few of my nana's hankies..they aren't all pink but maybe I will do a post on them one day..also some of her vintage costume jewelry..cool.

Have a great week!!
hugs
Barb

Ms. Sue, I have never seen one like the pink tripoid thingy. It's really pretty and I love pink pottery. Blessings, Marta.

Love all your pretty pinks...and I think little gadget is a butter warmer. It's pretty,whatever it is.. Happy Pinks and have a great week.

OK - I think I have it straight-Thank you, any help I can get. Have a good week.
ann

Love all your pink treasures,,Next saturday my sis and I are having a pink scavenger hunt, at yard sales,,cant wait.
Have a great weekedn

Oh my gosh!!!! I was just looking through some of your posts. We really do have a lot in common, the picture on the horse is uncanny. I also was born in a nursing home in Norwood Mo in 1947. My birthday is Nov 7 but what a coincidence just the same.
So happy to be swaping with ya.
Ann