The Sparrow has Landed!  That was yesterday's Wordless Wednesday photo only post.
So today here are the 'Words'....and more photos...of course.

I know it's not a lunar landing, but I'm loving my Old/New Loom to the moon and back. To dramatic? There's been a bit of drama with refinishing the maple wood, removing corrosion on metal parts and refitting the 'Brake System'...thank goodness for Google and internet links to the manufactures schematics on this...their oldest models brake system.

That's the brake system in photo one with a few shinny new 'S' hooks added to the old ones along with a new brake release cord.  First time I pulled on the old one it snapped in two.  I suspect barn mice had used it for weaving their nests.  On to threading heddles shown in photos two and three. I won't bore you with that tedious process, but know that it is time consuming and not a favorite part of getting ready to weave.  Next...'Slaying the Dragon'...also known in loom talk as Slaying the Reed. 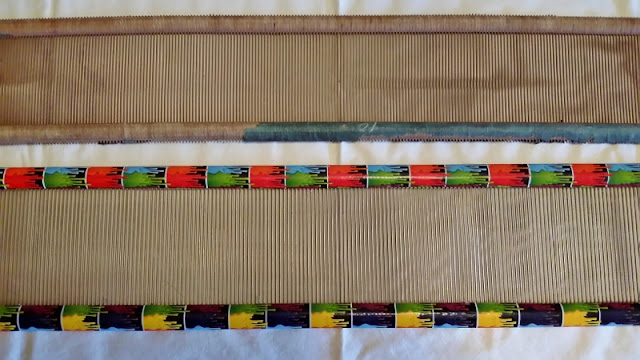 Here is the Before (top) and After shot of the refurbished reed. Again, so as not to bore with details, cleaning the rusted reed was comparable to cleaning dragon teeth with a steel wool toothbrush...after knocking off the rusty surface with a belt sander.  Then a 21st century 'Arty Duck Tape' upgrade over the 1960's version covering the frame.

The Dragon/Reed fits in a two part maple wood frame called the Beater Bar...photo 1 and 2.  Once it is secured in Beater Bar, the Dragon/Reed is ready to slay....really that's what it's called. After pulling all those threads through every other reed/tooth with a tool resembling a flossing pick with a hook on the end, I dubbed myself....
Dragon Slayer Sue, Mechanical Brake Engineer, and Duck Tape Specialist!
Impressive additions to my 'Resume'...don't you think!
Posted by Sue McPeak at 1/17/2019

Email ThisBlogThis!Share to TwitterShare to FacebookShare to Pinterest
Labels: Weaving

I hope as time goes by you have chance to show what you make with your loom.
Coffee is on

wow - quite a contraption. I'd say you are a dragon slayer, worthy of Game of Weaves