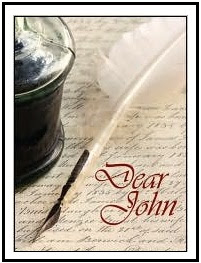 Not an unusual name, I know, but it seemed my Dad's Family Tree branches were full of nests that hatched boys named John and girls named Jane.
Since the First John Pittman born in America in 1726, John, obviously, was held in high esteem and followed the tradition in the naming of 'First Born Sons' who are destined to be called Junior.
From Colonial John through Civil War John, the Pittman John's led the nation as the Number One Given Guys Name.  This trend continued through the 1920's.  During these Trend Setting years, William ran a close second in the US and in our 'Tree' with Eleven Williams.
True to Trend, James, George, Robert, Charles, Joseph, Frank, Henry and Thomas were 'Tree Toppers' as well as 'Chart Toppers ' across the nation. 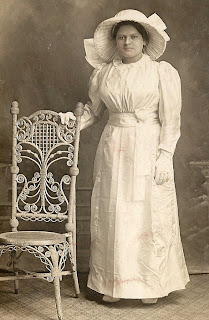 Also, not an unusual girls name, never mind that Jane as a Given  Name, only made Number Twenty-Two on the All Time Popularity List.
Jane The First, Jane Calvert Leatherwood 1746-1764, believed in the 'Family Namesake' tradition.   Her son's were John, William, James, George, and Thomas.  She named two of her daughters after herself or possibly her mother...one was Jane and the other Janey.
Jane The First in 'Our Tree' was the Direct Ancestor and 4XGreat Grandmother of her namesake Martha Jane Marley Carroll, my Great Grandmother.  Who so broke with naming traditions, that all the ancestor John's and Jane's were likely rolling in their graves. 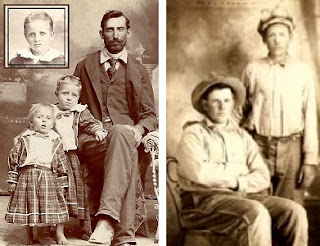 So begins the 'Unusual Names' in my Family Trees with Martha Jane's first born son Othello Elisha.  Now Elisha was her father's first name...that was easy to trace, but Othello...not a single one to be found.
Her second son Merrett Douglas, though not an unusual name, was the only son declared by a Census Taker as Male.  Othello's name was entered as Othella and declared to be a Female.  An honest mistake I'm sure...especially since both boys were wearing dresses.
No doubting their gender in later years...Othello (sitting) and brother 'Mert', my Great Uncles, are likely rolling in their graves to this day over the only photo taken with their father in 1901...and them in dresses.  Their father died in 1903.
As to the name Othello.
I seriously doubt my Great Grandmother Janey was a reader of Shakespeare,
and I know for sure he is not an ancestor...
unless he fell far from the nest.
Posted by Sue McPeak at 1/15/2019

Oh this is just so funny and so YOU. I would have known this was your writing even if it didn't appear on your blog. But yes, how does one go from John to Othello? In our family, we wonder how a woman with a lovely name like Laura came up with Elta and Leota for her daughters.

On this prompt I could have written a comedy column ala Erma Bombeck with the number of unusual names on my family tree roster. Sure glad I wasn't named after either of my grandmothers...Effie and Minnie. Really, I don't know which would have been worse Effie Sue or Minnie Sue.