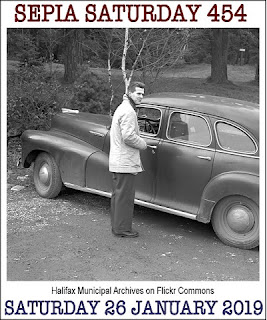 Sepia Saturday 454 has the makings of a Vintage Car Show, and inadvertently gives rise to what could have been a modeling career of underwear...or the models most embarrassing photo to emerge from the 'Shoebox Album'. 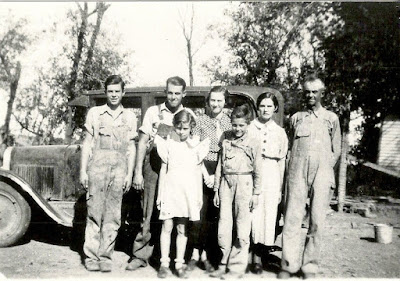 First Family Portrait by Cars.  My grandparents, Minnie and Joseph with their 5 children on their Iowa Farm.  Portrait taken in 1938, but the Family Car was probably a late 1920's model.  From the looks of it, the car made plenty of trips on the dusty farm road. 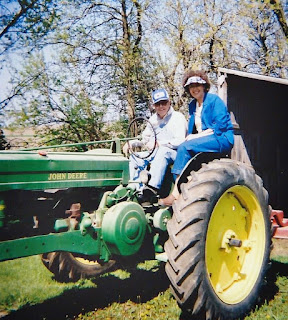 My Iowa Farm Family's most important motor vehicle was a tractor.  Pictured here is the all grown up little boy from the 1938 photo giving me a ride on the family's tractor from the same time period.  They take great pride in their vintage tractors and are still used today in parades and Tractor Shows.  My Uncle is standing next to my Mother, the youngest of the five children in the Family Portrait by Car. 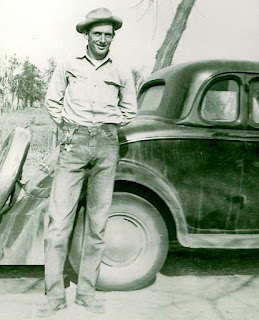 Another Uncle, this one many miles from the Iowa kin.  He is one of those long, tall Texas guys who all of his life loved cars and trucks.
He was a fixer of motors and a tool guy with a knack at fixing just about any thing mechanical.
Those mechanical skills served him well from 1942- 1945 as an Aviation Engineer in the US Army.
He did tours in French Haven New Guinea, Luzon Phillipines, and Tokyo, Japan.  Was awarded 3 Bronze Stars, World War II Victory Medal, and several other Wartime Medals.
As seen in this photo, he had a special appreciation for older model cars.  I don't know if he ever had a brand new car.  However, like his brother, my Dad, driving a new car was not affordable and their passel of kids would not fit in a fancy new sports car.
So it was older model big cars they drove.  My Dad's favorite... 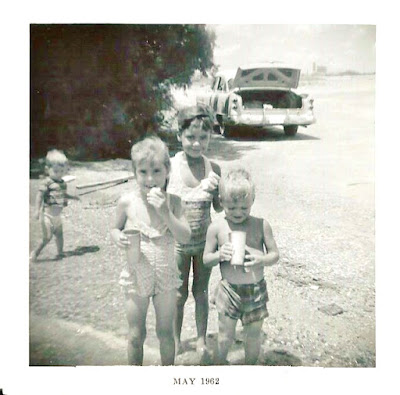 A Pink Cadillac with a trunk bigger than Dallas...we say that in Texas when it's something really big...and room for his kids, their cousins and the whole neighborhood.  That's my cute sister in front of cousins modeling the latest in girls bathing suits in 1962.  Lucky for her she was not modeling her underwear and saved from an embarrassing photo to come out of our Mother's Shoebox Album. 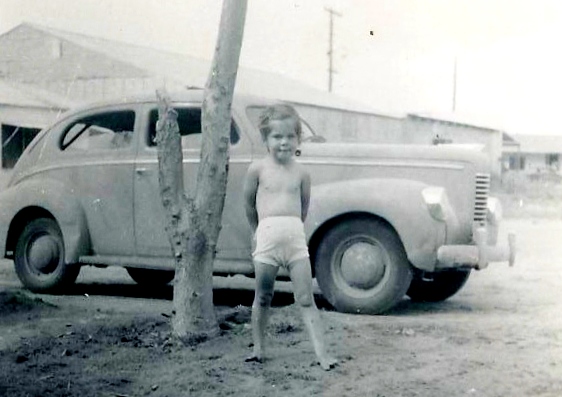 At least I was wearing clean 'Big Girl' panties.