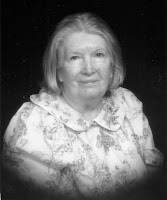 All by my Aunt Irene.
Her hours of note taking in libraries and the inquiries from Genealogical Societies from Georgia to Texas have given me an abundance of information on which to build our Family Tree in the Technologically Advanced Genealogy Community of the Twenty-First Century.
So, after many hours of  21st Century Technology and Online research, I was back to Irene's 20th Century research center...'At The Library'...looking for a step-great grandmother revealed through online Civil War research, and a death certificate.  Irene's research gave no clues that her widowed grandfather had a second wife much less how their union led to a generation of double grandparents, aunts, uncles and cousins.

The funeral services were conducted by Reverand M.O. Williams, pastor of the Methodist Church, of which church the deceased was a devoted member.
A husband and two children, who reside in Grandfalls, are left to mourn her loss.

Obituary for Mrs. George Washington Pittman...Nancy Anne Carey Forkner Pittman.  Born...April 23, 1854 in Monroe County Tennessee to John E. Carey and Ellen M. McAllister.   Died...August 16th, 1918 at the age of 64 in Fort Stockton, Pecos County, Texas.  Survived by husband George Washington Pittman and two children....who turned out to be granddaughters. This I knew from the 1910 Census that listed Maime 4 years and Tillie 1 year, and who at the time of Nancy's death would have been 12 and 9 years of age.  Who and where was the Mother of these two granddaughters?   Why weren't Nancy's SIX children she reported as having given birth to in the 1900 Census, listed as surviving her or preceeding her in death?   Questions for another 52 Ancestors Week.

For now, the 'At The Library' Obituary Revelations!!

The Riggs Hotel where Nancy died had a special place in my life, too.  As a former member of the Fort Stockton Historical Society and Board Member of the Annie Riggs Museum, I spent many hours there.  What a special moment it was for me when I read that my Great Grandfather and Step-Great Grandmother had stayed there exactly 95 years ago to the day that I Microfiched the Obituary!  I could hardly wait to get back to Fort Stockton and the Annie Riggs Museum to find their Signatures in the August 1918 Registry. 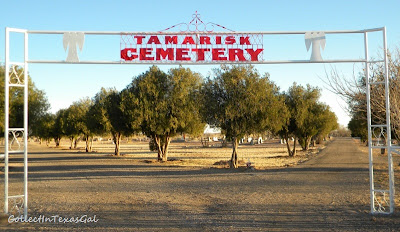 The remains were prepared for burial by Undertaker W.H. Bird, after which they were taken to
Grandfalls, Sunday afternoon and interred in the cemetery at that place.

That place being the Tamarisk Cemetery.  Another Special Moment to realize that another of my Pittman Texas Ancestors can now be officially laid to rest with other Family Members including George Washington Pittman's Grandsons and Great Grandsons.

You are fondly remembered in the Pittman Family Tree and History
as documented in Tracks of My Texas Ancestors.
Posted by Sue McPeak at 1/28/2019

This is a good reminder that sometimes we need to go back to 20th century methods to advance our research. The best part of this story though is the serendipity of the connection to the Riggs Hotel/Museum. Tres cool!

Yes, it was a serendipity connection. I hadn't thought of it that way. I do remember getting quite emotional sitting there at the microfiche machine. And again at City Hall cemetery records...the internment lot map for 1918 was lost in a fire.

THis is a great story about connections. I was hoping you'd reached a conclusion about her 6 children that weren't mentioned in the obit. I guess they must have died before she did...is that what you think?

I'm hoping there will be another 52 Ancestors Week prompt that will give me the chance to tell the rest of the story...about the 6 children not mentioned in the obit. But until then...know that they are were all still living, identified, documented and profiled. There's is quite a story of connections, too.

What a wonderful thing, to be able to have the time and resources to do this research. Alana ramblinwitham.blogspot.com

Yes, Alana, it has been a very special journey of discovering family history and being able to take advantage of Old and New Resources. Time well spent.