Sepia Saturday...Working For The Railroad 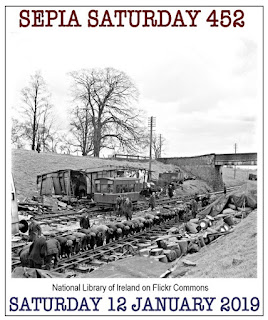 Sepia Saturday Prompt 452's scene of a train accident and the subsequent work of men working on the railroad immediately brought to mind a first cousin 4x removed.  It also reminded me of the song 'I've Been Working On The Railroad'.
The song and first cousin have several commonalities discovered during the research of my Atlanta, Georgia, ancestors.  Let's begin with a bit of era history that connects the two.
Cousin Richard A. Pittman was a railroad man with The Western & Atlantic Railroad whose employment there would become the focus of his work history in more ways than is officially documented.
The W&A RR became a key link to the chain of Southern railroads connecting the Atlantic Ocean and the Mississippi River.  It was the foundation for Atlanta's emergence as a rail center.

By the time of the Civil War, the W&A had 46 locomotives, two of which were to become participants in the 'Great Locomotive Chase' of April 1862.  It played a major role in the Atlanta Campaign. It's loss to the South in 1864 was devastating to the Confederacy's hopes of victory, but at the same time played a major role in the rest of Richard Pittman's life.  It is likely he was there as a part of his military assignments when Sherman marched through Atlanta.   It is possible that he began his railroad career with the W&A and was instrumental in getting it back on the tracks during the Reconstruction Era.  We know from the 1870 US Census that he was a Conductor when the W&A's stock was leased for 20 years to a corporation made up of officers of the W&A's connecting roads headed by former Governor J.E. Brown.
By 1880, Richard had been in W&A employment for more than ten years and had changed positions a number of times, most likely due to opportunities for better wages.  The fact that he was the son of a well known city official did not seem to have an impact on his railroad career of moving up the ranks in an administrative capacity.  On the contrary, he remained a part of the day to day work force which is indicated in the 1880 Census where he declares his occupation as 'Watchman'.

As reported in the Augusta Chronicle almost three weeks after the accident, the first article reveals the 'horrible manner' in which Richard was called an unfortunate man.  This newspaper circulated widely to the smaller farming communities outside of Atlanta where many of Richards friends and relatives lived.  Had they not already known about the accident, the Chronicles report no doubt was read as insensitive and gory in the details and greatly lacking in relating Richards many years as an employee of the railroad.  The second article printed on page 1, four weeks after the accident, certainly showed a lack of information and disregard for all involved in what was certainly a tragic event for the Pittman Family and the Western & Atlantic Railroad.
To date, no information has been found or researched from the Atlanta Constitution which would have, in all likelihood, reported a more accurate account of the accident and possibly an Obituary for Richard A. Pittman, for the owner of the Atlanta Constitution was a relative of the Pittman Family.  Then there was Richard being the son and brother of Judges Daniel N. and Daniel J. Pittman.  His death would have been front page news and probably the beginning of an investigation into the circumstances of a trained watchman with years of experience in and around the workings of the railroad.  Hardly one to disregard safety rules or be less than cautious of passing trains, as is insinuated in the Augusta Chronicles report of December 24, 1882. 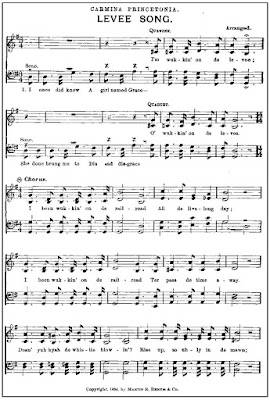 I've Been Working on the Railroad is an American folk song first published as a Levee Song in a book of Princeton University songs in 1894. (Wikipedia)
The songs publication twelve years after Richards death must have been the final reminder of his working on the railroad.  For six of those twelve years Richards widow Nancy E. Pittman's name appeared in the Macon Telegraph newspaper.
The Pittman-Elder Case presented in City Court in October of 1885 was reported to have ended in a mistrial.  The case was settled the next year in November 1886 with Mrs. Dick Pittman receiving a settlement of $700 on a note of $4,000.
No details to the nature of the suit were reported, but it was stated that Nancy was the widow of Mr. Richard Pittman.  Another report from Ordinary Court was published May 8, 1888 granting letters of dis-mission to Nancy E. Pittman.
Six years after her husbands death, it seems Nancy was relieved of her duty as the executor of his estate with the settlements in all cases.
Unlike Richard's widow's meager court settlement funds, the Levee Song has become an American Classic translated world wide, has been the subject for children's books, cartoons, and nursery rhymes.  The verses and chorus lyrics have been adapted to fit numerous other songs, movies and school spirit songs...for example:
The Eyes of Texas" is the spirit song of the University of Texas at Austin and the University of Texas at El Paso. It is set to the tune of "I've Been Working on the Railroad" with alternate lyrics written in 1904. Students, faculty, staff, and alumni of the University sing the song at Longhorn sports games and other events. (Wikipedia)
Posted by Sue McPeak at 1/12/2019

Email ThisBlogThis!Share to TwitterShare to FacebookShare to Pinterest
Labels: SepiaSaturday, Tracks of My Georgia Ancestors

Yeah, I'm always amazed at the gory details of horrible accidents or murders covered in early newspapers. But the 2nd paragraph takes the cake - they might as well have said, "He got what he deserved." Sheesh. I wish we knew the details of the lawsuit.

What a terrible accident. But also, what an awful way to report it - especially practically chastising the poor man posthumously. Geez Louise!

until I went to law school I had no idea how many accidents occurred from trains. Often these were lethal or caused lifelong disabilities. Again Sepia Saturday shows us real history.

A tragic story well told. My grandfather worked as a brakeman as a young man in the 1920s-30s, and I can remember him talking about the danger. It was one reason he moved up to a safer position as a railroad yardmaster. So I've known the words to that song since the age of two.

The poor bloke.
And terrible & cruel reporting.No doubt to help his employers not having to share any blame......

Sensational writing/reporting to sell the news or whatever - and at the expense of the victim or the victim's family. I think Tony's right - that second article seems to offer cover for his employer.

It is fascinating to read old articles for their salaciousness. I discovered a couple of my grandmother's half-brothers were caught at a whore house. One was in his early 20s, the other in his teens. The way it was written surely had a lingering effect on the family.

Great story to go along with the prompt.

Thanks for posting this info. I just want to let you know that I just check out your site and I find it very interesting and informative. I can't wait to read lots of your posts. Moss And Colella