May Flowers Series...Rose Revelations at The State Cemetery of Texas 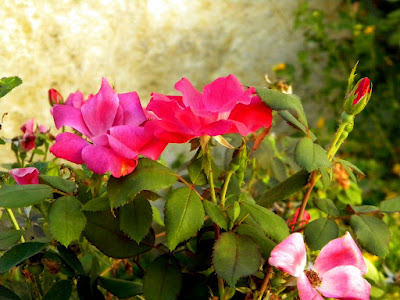 I'm sure you have heard or read the famous quote Stop and Smell the Roses.  It's a reminder to take time to enjoy those little things about life, your family, spouse, friends and even your job.

It also is an encouragement to forget about the thorns, the pains and problems they may cause.

Do you think about that when stopping to smell roses?

I certainly did when I stopped to photograph these roses in the rose garden at The State Cemetery of Texas. 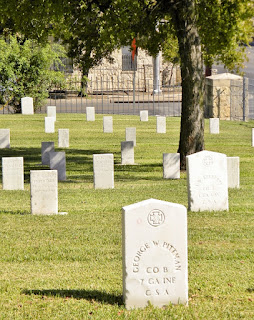 Although I had lived in Austin for a few years in the early 1970's, visiting Texas historical landmarks was not one of the things on my 'Places To See' list.  Had it not been for the research done on 'Tracks of My Georgia Ancestors' I would not have known about The State Cemetery of Texas.

After learning that my Great Great Grandfather was buried in the Confederate Soldiers Field, it became a mission to visit his grave site.  The Confederate Field plaque details the history:

Confederate soldiers were buried in the Cemetery during the Civil War.  Most of the burials in Confederate Field, however, date from 1889 and are confederate veterans, their widows and other women who helped the confederate cause.

Texans fought on both sides of the Civil War.  While there were few battles on Texas soil or in Texas waters, the Battle of Palmito Ranch, near Brownsville, was the last land encounter of the four year war.

In the Confederate Field where my Great Great Grandfather is buried there are about 1,583 white marble headstones that mark Confederate Soldiers graves and 515 graves of family members/spouses. 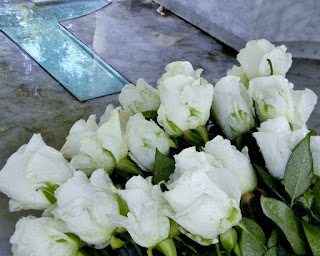 The State Cemetery of Texas is the burial ground for the honored dead of Texas and contains the remains of Stephen F. Austin, the 'Father of Texas'.  Governors of Texas and Representatives of every period of State history and department of State government are interred there as well.

Since the early 1950's those eligible for burial on the grounds include designated State Officials, Confederate Veterans.  Others interred include prominent citizens...like the lady whose grave is marked with over a dozen fresh white roses almost daily.  I happened by shortly after they were placed...and yes, I Stopped to Smell the Roses. 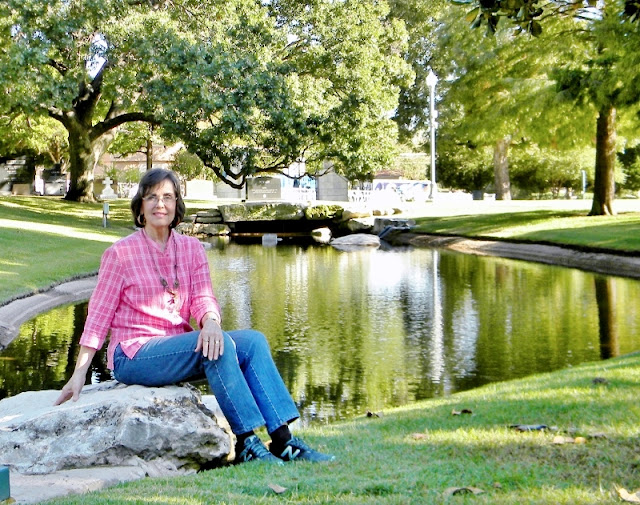 If ever in Austin, Texas, Stop and Smell the Roses at The State Cemetery.  Not only is it beautiful, it is filled with amazing Texas History.  For a virtual tour and the history, HERE is the link.
Posted by Sue McPeak at 5/04/2018

Email ThisBlogThis!Share to TwitterShare to FacebookShare to Pinterest
Labels: Flower Series, Tracks of My Georgia Ancestors

lovely pic of you. My neighbors, from England, grow beautiful roses in along their front drive. I'm fortunate to enjoy them. Roses are tricky - we had some running roses and they caught every disease in the book. (story of my life from sewing to gardening - always a mishap!)

I love your point about the thorns of roses. I never considered that, but it's true - when you smell the roses you can appreciate the good parts of the flower.

How beautiful. As you no doubt know, the Victorians were big into floers and using cemetaries almost as public gardens. The Cvl War greatly impacted our country's burial customs, too. I didn't know Texashad a state cemetery. Alana ramblinwitham.blogspot.com

That's a very nice picture of you, Sue! Roses are favourites of mine and I am busy planting new ones in the cottage garden. I love a perfumed rose best of all.