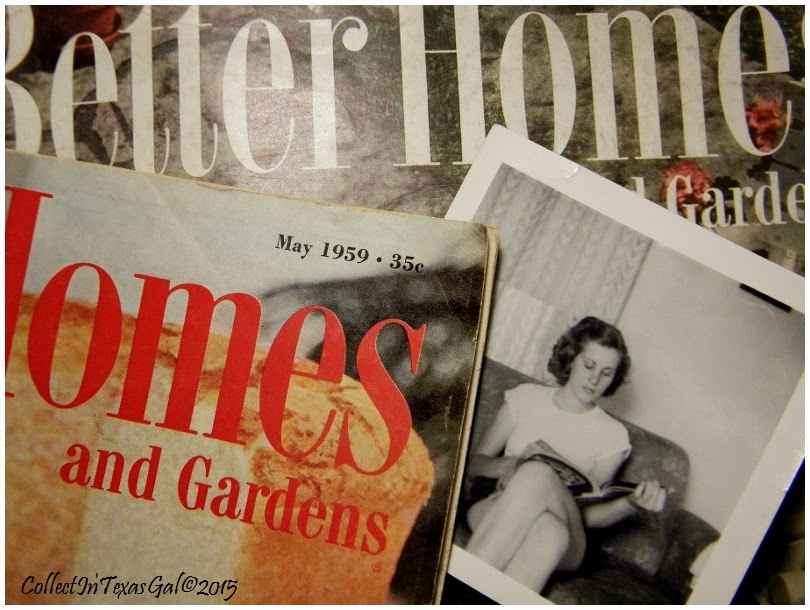 I would have to answer that question with a big NO...back in May 1959.  It was the last month of school, and I was ready for summer and a break from school work and reading.

I must admit, I was not a avid reader in school until my Junior year of high school.  I have an English Literature teacher to thank for that.  He introduced me to historical novels and tried his best to get me to search within for at least a stanza or two that rhymed.

My Mother was a reader.  We didn't have a lot of what I would call Classic Literature reading material at home.  More like the newspaper, paperback novels and westerns...Zane Grey was my Dad's favorite author.  Even at 35 cents, Better Homes and Gardens would have been a luxury coffee table piece of literature in 1959.  I can just imagine my Mother's gasp of shock at my paying $5 for this copy to add to my collection of Magazine Ephemera. 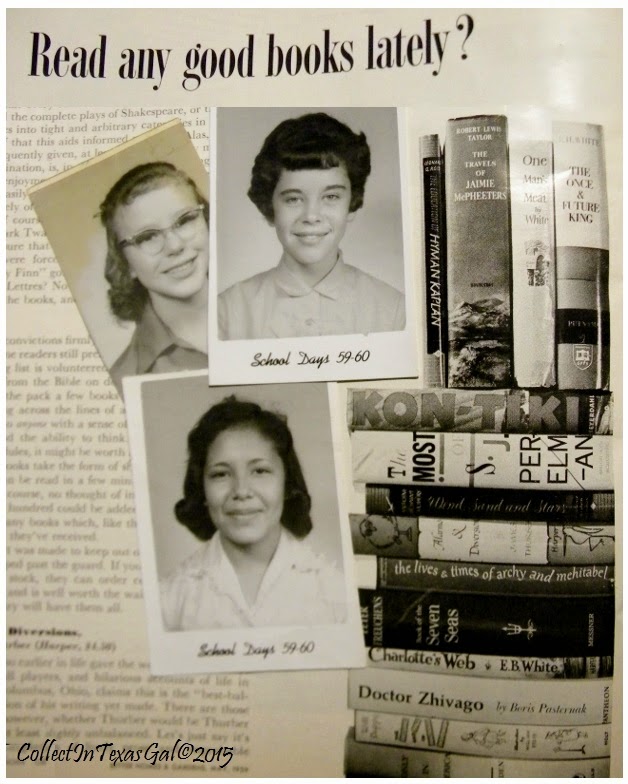 When I came across Better Homes and Garden's  'Feature' book review of recently published books in 1959, I was surprised by several of the titles.

I for one would not have come close to reading Doctor Zhivago as an eighth grader in 1959, but I had several friends that probably did read Charlotte's Web and The Travels of Jaimie McPheeters.  They were avid readers.  While they were reading those current reads, I had my nose buried in anything written about Babe Didrikson Zaharias.

As I read the 'Feature', I was struck by the timelessness of these words written in 1959..."The great ease with which books are turned out these days, for all that might be said for it, imposes on the casual reader an almost insurmountable task of selection.

Not so long ago, a man had time to read most of those volumes that pleased him, or at least the ones his salary could afford.  Today, with a busier society and a more exhaustive and inexpensive choice, he has trouble keeping up with the reviews, let alone the books to which they lead."

I am only 56 years late in reading Gordon Greer's Review of Doctor Zhivago, Charlotte's Web and The Travels of Jaimie McPheeters, but read them I did.  About Doctor Zhivago he wrote...Boris Pasternak, the latest Nobel award winner, was kept from making an acceptance speech when the Soviet Government forced him to reject the prize.  A partly autobiographical, largely disenchanted study of Russia during the author's lifetime, Doctor Zhivago represents one man's willingness to stand up and be counted.  It is not an easy book.  It is a good one, though, written with great eloquence, and deserves everyone's attention.

I wholeheartedly agree with Greer's review on Doctor Zhivago...it was not easy.  I won't read it again, but I may download The Travels of Jaimie McPheeters.  Greer describes it as a robust novel of a journey from Kentucky to California taken in 1849 by Sardius McPheeters and his 14 year old son Jamie.  Right down my history reading alley!!!

Hi Sue - I was always a good reader, but probably tried 'good' books too early and that put me off the learning aspect found in books and the fact I wasn't the brightest at school and so wasn't encouraged in that direction .. I enjoyed sport and being outside ... that seemed to rule - but I read mysteries and historical romances probably! Now I don't tend to read much either .. I research and seem to have a broad knowledge ... I think my summer may be spent reading!... it's about time ...

I read books all the time - I love how easy it is to grab and eBook just because I fancy reading it at that moment and I have shelves full of paperback and hardbacks in the library :). I'm not one for classic literature though, or historical (that's the stuff my mother loves - she can't get enough of historical novels :)) - I like fantasy, sci-fi and horror. It's the 'other' aspect of those genres that hooks me, something not here. I do remember enjoying Charlotte's Web at Primary School though - of course I suspect you can consider a talking spider and pig 'other' as well :)
Tasha
Tasha's Thinkings | Wittegen Press | FB3X (AC)

Oh, when you have the opportunity you'll have to swing down to Beaumont and check out the museum dedicated to her! http://www.babedidriksonzaharias.org/

I remember watching the Jamie McPheeters western on tv. Kurt Russell was just a kid.

I am a huge reader. Currently reading Wolf Hall by Hilary Mantle. Good stuff. My mom was a reader and you never interrupted her if she had a good book. She and I fought over The Thorn Birds back in the day. Good memories.

All the time!
I am currently re-reading the entire Harry Potter series. Just started The Order of the Phoenix today.

--
Tim Brannan, The Other Side Blog
2015 A to Z of Vampires
http://theotherside.timsbrannan.com/

Oh my goodness, reading the moaning of 'nobody reads books today' is like reading the same moaning nowadays. I find it slighlty comfortable, I mean, 1959 people thought life was so different from 'before' that less people read books, but today, people still read books. So, I'm hopfull ;-)

I read books all the time, but I must admit I haven't read many good ones lately, and I'm sorry to say, lately I've read mostly self-published novels...

I've been a big reader for as long as I can remember. At the moment I'm working my way through the Popsugar Reading Challenge which gives you 52 books to read during the year. I've slowed down a bit recently but it's prompted me to try reading lots of the classics I avoided when I was younger.

I've recently finished reading The Pickwick Papers by Charles Dickens, now I'm onto Unfinished Tales by J.R.R. Tolkien and then next up will be Gone Girl by Gillian Flynn. :-)

Good for you doing a reading challenge...and a writing challenge, too....AtoZ is a bit of both, huh? There are many classics I would like to read....that's what I should do...a Reading Bucket List. I too would include Charles Dickens, but I think I'll continue with JRR Tolkien's movie versions. I'll have to check out Gone Girl...that's a movie, too...right?

I was quite taken with the book reading words from 1959 and how the same could be said today. I really like my Kindle, but nothing will ever take the place of turning pages or the feel of a real book. Self-publishing is here...we'll see if it has the staying power of publishing houses and the promotional reach they command.

After visiting your blog and your Letter R post on Vampires, I'm glad to hear you are re-reading Harry Potter. I was worried about your dreams/nightmares with that scary Roland Vampire guy. I hope you won't need a line of rice around your bed while reading the Order of the Phoenix...bwaaaahaha!!!! Thanks for visiting!

Not only are you a reader, but you are an excellent 'Book Reviewer'. I count on your reviews for my reading list. I loved Colleen McCullough's Thorn Birds and everything else she wrote. I don't know what happened to my copy of that book. I read it before and again after the movie. It is one I would turn pages again to read...gotta look for a copy. My mother loved to read, and when she was to ill to read, I would read to her...very special memory for me. The last thing I read to her was 'The Shack'...for the second time.

OMGosh, I forgot about that TV Series, and never made the connection when I read the Good Housekeeping Feature Review from 1959. No wonder the paperback book is so expensive on Amazon.

I would love to visit The Babe's Museum. I knew it was in Beaumont. I'll have to make a point of getting there next time I'm near Houston....if I don't have to go to Houston to get there. Thanks for the website link.

Yep, I figured you for a fantasy, sci-fi and horror gal. I'm getting a real eye opening education from your AtoZ posts on Demons and Demonettes! It's all good....as long as I read a bit of Charlotte's Web before bedtime until the spider grows bloody fangs. Thanks, Tasha!!!!

The reading for research offers so much learning and retention of what often is gone when reading novels. I do a lot of that in my genealogy research. Once you read it and then apply it to your blog or ancestor writings, it becomes a part of you. I am so amazed and inspired by the reading/research/retelling that you do on your blog. Your knowledge is broad, varied and intellectually stimulating to read. I should have subtitled this post ...Read Any Good Blogs Lately?

I thought about checking out "Charlotte's Web" when I was at the library yesterday, but still didn't feel like reading it. I don't know why. I liked E.B. White's "Stuart Little". I'm in another phase of reading children's books at the moment. Read a good one by Kate DiCamillo called "Flora and Ulysses". Gotta love a tale about a squirrel that got superpowers after being sucked up by a vacuum cleaner.
Take 25 to Hollister
The View from the Top of the Ladder

I am an avid reader of real books that I can touch and feel in my hands! My mother adored Babe Didrikson Zaharias! I have her posted my pinterest boards in various places. Great mind thinking alike Sue! Have a great day!

I'm always reading at least one book at a time, usually more than one. I'm reading a quilt themed book on my phone (beats standing in line being bored) and I love light mysteries, too. I prefer paper books over reading on my phone. I just bought half a dozen books at the thrift store yesterday. Now to find time to read all of them.