I should clarify a few things about the one 'Q' word and how it's definition and use has changed from 1963 to 2015. 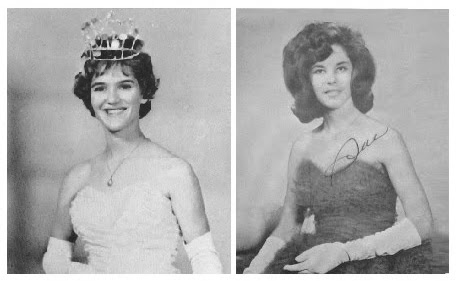 'Quaff' which back in 1963 was not remotely on my list of 'Q' words, but was on Websters and defined as...quaff \kwaf\ vb[origin unknown] : to drink deeply or repeatedly-quaff er n.

So not in my vocabulary back then...drinking deeply...we called that 'chug-a-luggling'.
However, in today's 'Urban Dictionary', Quaff has a new and relevant definition as...Ginormous HAIR of epic proportions.
Back then we just called it Big Hair, Ya'll.  But, not everyone had the hair for such a Ginormous Do!  A perfect example is Queen Lea.  Can you imagine that crown being jammed down on my Bouffant Flip?  I am sure that is the reason she was crowned and I was not.
Truth be told, I knew from the get go I did not have to worry about my ratted, Aqua Net sprayed Quaff getting squashed with that Tinsel Pipe Cleaner, Be-Sequined Tear-aira.  It always went to a flat haired upper classman....I had no idea that was a pre-requisite...otherwise I could have sported my 'drowned rat do'.  (seen Here) 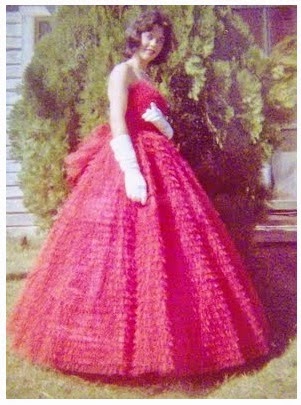 At any rate there were greater challenges to be met in vying for the Bouffant Bling.
Bless her heart, my dear mother, had her hands full to transform her 'NoBosom-NoButt/Skinny Armed' daughter into a Quaffed Queen capable of wearing a strapless dress and keeping elbow length formal gloves from looking like welders work gloves.
She began with the DRESS...my first ever and unforgettable formal...the 'Red Net Dress'.  It worked with it's built in and up Playtex bra augmented with a box of Kleenex and layers of stiff red net.  That pretty much took care of the no bosoms issue of wearing a strapless dress.
The no butt was a no brainer with the Big Red Net Bustle, but the gloves...now that was a big problem..as in sizing for big hands and skinny arms.

The smaller size that stayed up above the elbow cut off the circulation to my fingers, so we went with extra large, which mind you was not easy to find in white formal wear.  We tried rubber bands to hold them up, but that made my whole arm numb.

In the end, as you see, I simply let them puddle around the wrist in what BackThen, was the 'Green Grass/Wood Siding/Cedar Curtained' back drop, but today is known as  Red Carpet, HollyWood, Celebrity Coiffured .... 'Here's looking pointing at You, Babe'.
Posted by Sue McPeak at 4/20/2015

The red dress reminds me of what Carol Burnett wore when they did a parody on Gone With The Wind! That was a lot of dress for such a tall, slim and leggy beauty. As for your "quaff," isn't there an expression that says, "The higher the hair, the closer to heaven," or something like that? Another wonderful story, Sue!

Love that dress! It certainly disguised any "imperfections" as defined in the 60s. And your hair looked amazing, Dahling!

LOL...I loved Carol B's Gone With The Wind skit...the dress made out of drapes...rod and all...was hilarious. Wow, I have not heard that Big Hair Quote....now I know why my Dad was always saying, "Sue, get your head out of the clouds, and get busy on those dishes."

OMG that dress was amazing. It cost a whopping $30...a lot of money back in 1963. I wish I still had it today although it would have to be worn by my dressmaker form Modella...she can get skinny enough for it to fit...I can't. I can still get that Big Hair Do with lots of ratting and hair spray. Thank you, Dahling!

The dress looks lovely :) I'd not heard of quaff in connection to hair before, only to drink - quiff yes, quaff no - learn something every day :). I think the first formal dress I had was a three quarter length, silver grey, strapless number. I remember no details and there are no photos thank heavens ;)
Tasha
Tasha's Thinkings | Wittegen Press | FB3X (AC)

I'm guessing the new version of Quaff is the Q spelling of coiff.........No wonder spell check is necessary in this world. Great hair and dress - you win. I never went big.

Hi Sue - what a magnificent job your mother did with your dress .. and you were very happy and brave to wear it - just glad the Kleenex didn't come layering out?! What fun .. gorgeous to look at, and such an amazing colour ... Quaff - Queenly crowns ... such fun - I've been thinking beehive .. that's what we used to call high hair .. and I love the thought of reaching for the heavens through your hair .. and your Dad saying get on with the dishes .. fun post - cheers Hilary

Well, I think the end resoult was quite impressive, wasn't it? ;-)

Hey, this is the second post talking about 'quaff' I read today. And I am talking about hair too on my blog. How strange is that?

Well, you know those Urban Dictionary folks...they have their own definitions. Worked out for my letter Q and the Big Hair stuff. No details and no photos....must have been some dress to forget.

Your guess is a good one....those crazy Urbanites...works for me. Thank goodness for spell check. You know I never thought of it as a contest, but in a way it was.

I remember watching my sister Sarah tease her hair and then arrange curls with a rat-tail comb. Big hair never truly goes out of style in Texas.
Visit me at: Life & Faith in Caneyhead
I am Ensign B of Tremps' Troops
with the A to Z Challenge