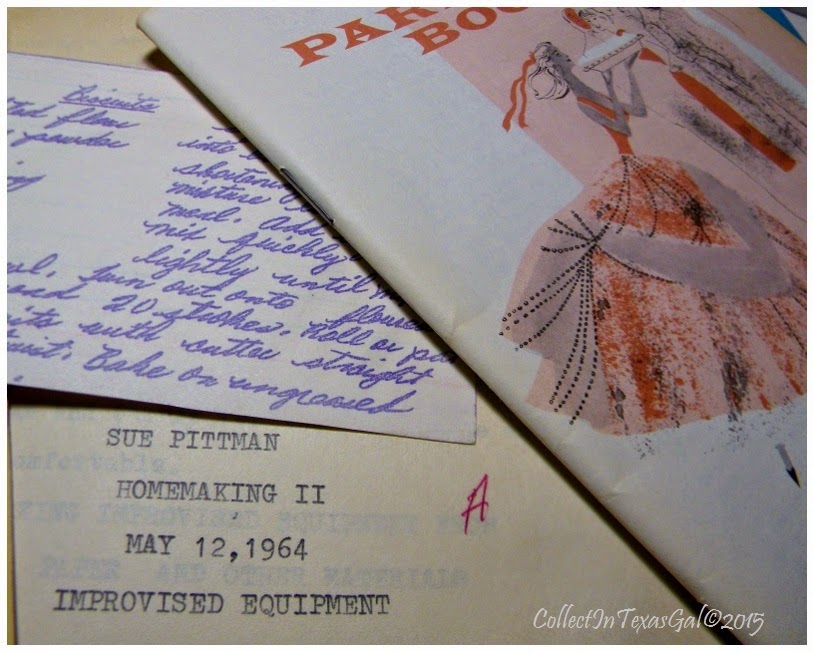 The paper is yellowed.  The worksheets are mimeographed.  The Good Housekeeping Pamphlets are OhSoRetro!

Can you guess the years I am 'trippin' through?  Maybe you, too have memorabilia and memories from the 1960's.   Do you have a HOMEMAKING II Notebook/Scrapbook?  I DO!!!

I'm so glad I saved all of those mimeographed Homemaking assignments, all of the pamphlets distributed by Betty Crocker, Home Service Company's like the Edison Electric Company and Good Housekeeping.  The Improvised Equipment Assignment gave me some insight about being a life long improviser.  It began way back when I learned to make a paper cup out of a sheet of mimeograph paper.  The cup was stapled to the assignment...I won't test it for holding water...it's 51 years old.

The best find in the assignment was the improvised waste paper bag made from The San Angelo Standard Times Morning Edition, May 9, 1964.  I'm going to plug in my Presto Percolator, grab my favorite cup, Elsie's Cream and a teaspoon of Imperial.  Won't you join me in a cup of Folgers and the morning paper.... 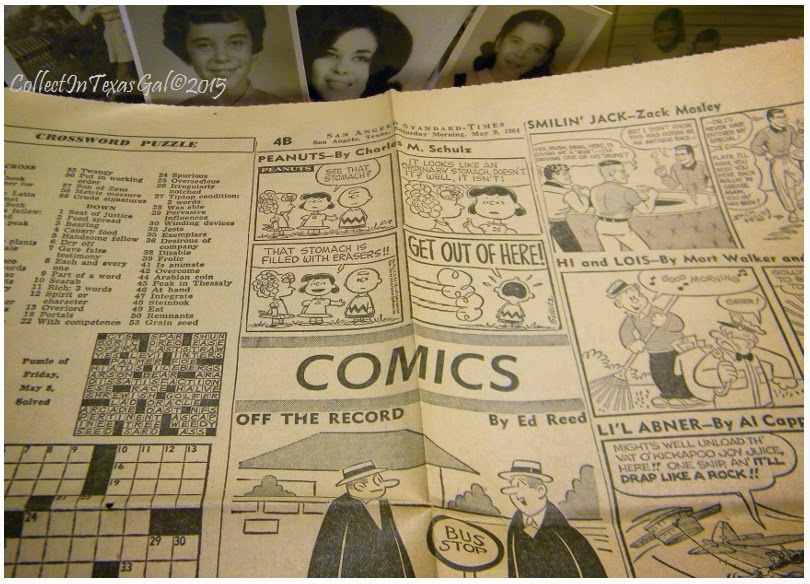 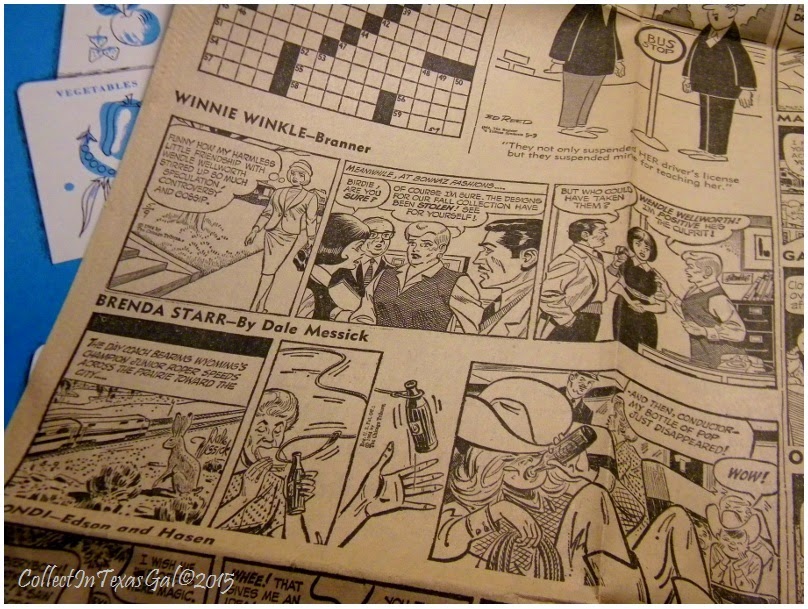 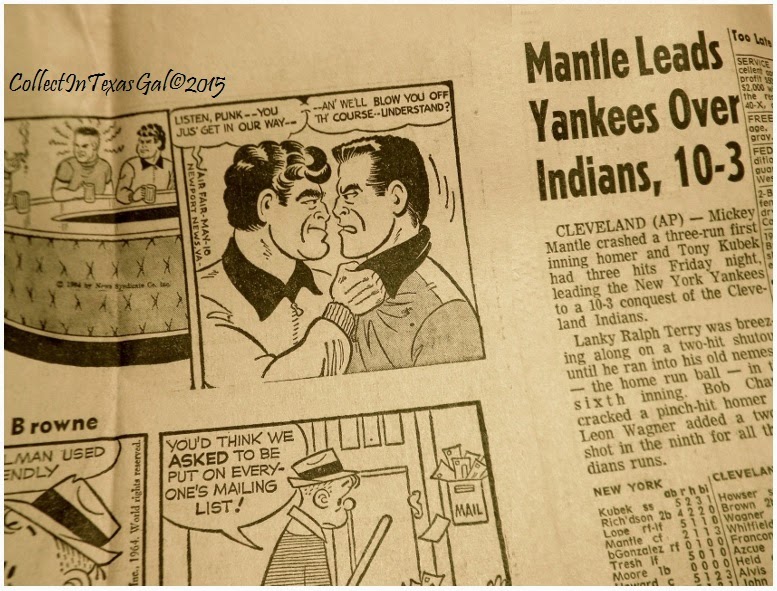 Are you curious about what happened to Winnie Winkle and Brenda Starr?   I was.
*Winnie Winkle was published from 1920-1996 in more than 100 newspapers.  Stories and artwork by Martin Branner.  Winnie Winkle was one of the first comic strips about working women and served as a reflection of the changing role of women in society.  (read more HERE)
*Brenda Starr was created in 1940 by Dale Messick.  Brenda Starr was portrayed as a glamorous, adventurous reporter, and at the height of the strips popularity it appeared in 250 newspapers.  The final strip was published on January 2, 2011.  (read more HERE)

Oh, and what about Mickey Mantel?  As you read, he was hitting home runs for the Yankees and continued to do so for four more years after this article was printed in 1964.  Known as the greatest switch hitter of all time, he was inducted into the National Baseball Hall of Fame in 1974.  (read more HERE)  I was a Mickey Mantle Fan...what a fun find after all these years!

It's so cool you saved all this. When we took up the carpet in our bedroom we found old newspapers under it and I remember one talking about when they brought in drink driving laws with an official limit in the UK (1967). They were telling motorists how much they could drink and it was far more than now - nearly 3 times as much.
Tasha
Tasha's Thinkings | Wittegen Press | FB3X (AC)

I always looked forward to the Sunday paper for Brenda Starr.
Just reading the words "mimeograph" makes me recall a fresh test, still wet, the purple bleeding through to the back, those chemicals teasing me to inhale deeply. Kids today don't know what they're missing.

that's a lot of cool history. It was always an honor to run the mimeograph machine - you got to go the office and be a big wig. Oh that smell..........

Yeah, I remember sniffing the fresh off the mimeograph machine tests and homework papers. Didn't seem to put me in a Meth Math state tho...I still got Big Red 50's! Me too on Brenda Starr.

When I was little we always read two Sunday papers, which meant double the comics for me. Brenda Starr was my favorite, and I always wanted to be a reporter.

What a trip down memory lane! How I loved the smell of mimeographed paper!! I loved it when they'd deliver sheets to the classroom still slightly damp. I even helped the church secretary mimeograph the church newsletter. Mama and my aunts wrote recipes in brand names! 1/2 Spry (shortening) and stuff like that.
Visit me at: Life & Faith in Caneyhead
I am Ensign B of Tremps' Troops
with the A to Z Challenge

Wow, I've not even had my first cup of coffee and I'm wide awake, love this post!

It would have been cool to keep the comics I read in the paper, but that would be years of papers. :)