Freedom of Speech...Even at Two! 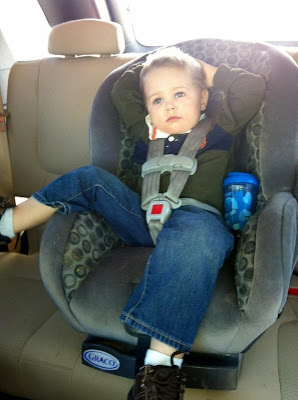 Our Two Year Old GrandGuy is a 'Thinker'.  He did alot of thinking before he ever uttered a word.  We were getting concerned that he wouldn't talk at all.  Afterall, he is the youngest of four and his elder siblings are teens and tweens with Smart Mouths and Smart Phones.  So, naturally, he is an IPhone-IPad IKnowHowTo Two Year Old.  That in itself is amazing to me!

When finally he began to 'Speak' he was a conservative  and thoughtful speaker.  He had one word for his parents...DaaE!  One word for me and HiHoney...Papa!  One word for food and drink...YaYa!  One word for comfort...TeTe...his blanket!  For everything else he just Pointed and everyone jumped and fetched.

As his vocabulary grew he spoke a language of his own....Jabberwocky. Or so I thought, until I saw him slide open the IPad...touch the SpongeBob APP and repeat everything SpongeBob said....in Japanese!  Right then I knew he would be Bi-lingual, a great Orator and Master Magpie! 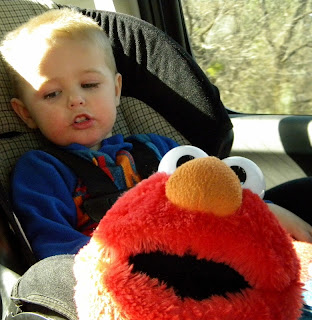 Now that his vocabulary has increased...both in English and Japanese... and his Magpie Skills are at a peak...his Freedom of Speech is often discouraged.  Actually, I should say....threatened with a good soapin'!﻿

Come On, Ya'll...where do you think I heard those words?  Ya'll spent all that time trying to get me to speak...SAY Nana...SAY I love you...SAY SAY SAY!  Well, now I'm ready to SAY what I hear YOU SAY!

Here it comes!  He, Elmo and I went to HEB yesterday...just the three of us...I'm driving...Jack is relaxed, groovin' on the passing scenery and talking to himself.


I know Elmo,  but I don't have any Soap!  Besides sometimes you just gotta get it outta your system!
Look on the bright side...we are not out in Public!
Elmo, you can only look shocked and I already know those 'S Words' so let's Chalk It Up to....
A Two Year Olds Right to The Freedom of Speech!
Posted by Sue McPeak at 2/23/2012

You are not alone, Sue, we have gone thru that here with our grand-kids! MyMister has a potty mouth and so what are the little ones supposed to do . . . what they naturally do . . . copy, mimic! Also the daddy does the same and of course Oma has let a few slip out here and there while driving! Our grandchildren are seven and twelve now, neither of them say a bad word at all (that we know of!) . . . they look at grandpa when he does and they say, "You owe us a quarter for every bad word you say, grandpa, and you are going to make us rich!"

Yours is a cutie and so very smart . . . great post, wonderful grandchild and some very loving grandparents!

First of all, little Mr. Jack is just adorable.

Secondly, our youngest (of four) didn't speak early either, and he did a lot of pointing which got him exactly what he wanted also.

Then, when he was nearly 3 he began speaking in full sentences and was in complete control of the English Language.

Why both talking earlier when every one around you knows EXACTLY what you want with a eh eh eh and a point or two?

Oh, and he took Japanese in college 'cause we didn't give him a Japanese speaking "toy" when he was young, more's the pity I now think.

What an incredible kiddo! Oh yes they do say those words when they hear them!!

Cute! cute! cute! he is too cute for words!! at least we know he didn't learn those "s" words from his nana, lol. But I understand the no talkin' techie 2 yr olds, my granddaughter is the same (except for speaking Janpanese... although I have heard her say a few Chinese words, lol)

Too funny! My two little grandsons speak Mandarin (or at least that's what it sounded like!)

I always told my daughter that her children's first words would be cuss words. She never got that from me by golly! She even got her mouth washed out with soap one time. It was the last time too. Now that she has her own children she says everything in front of them. And not one of my grandsons curse. They all correct her when she says bad words. I am proud of them.~Ames
P.S. One grandson(#2) never said a word until he was almost 2 1/2 years old. When he did talk he said a whole sentence. We were all shocked.

Think we all have some of those memories of children and @#%@ words. My son was a toddler when my sis was a teen. She was driving with him in the back seat when he said the "F" word. She ignored him and he said it again. She again ignored him. A few moments later he said: "Amy did you hear what I said?" As a wise beyond her years teen, she replied "Yes, I did and don't you ever let me hear you say that word again!" She never heard him say that word again. It's one of the family classic tales.