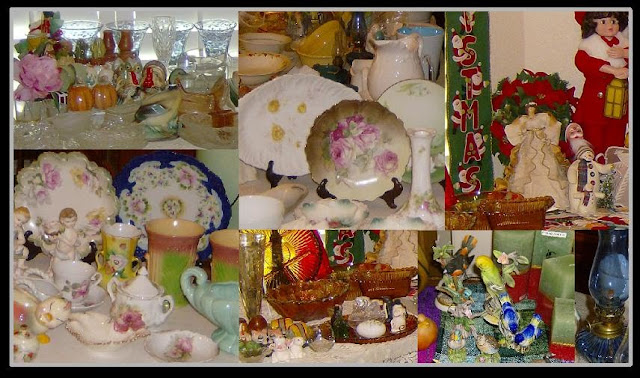 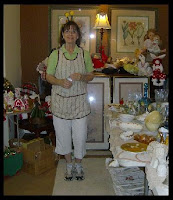 I thought I had alot of Stuff.  But after seeing Other Peoples Stuff ... I'm a Piker...as HiHoney says when comparing 'Lots of Something' to 'Not Much of Anything'.
Yep, this week of working two Estate Sales has been kinda of an eye opener for this GRIT.

I think I'm done!  Yep, it's HiTime to DeClutter and DePart with a bunch of DeStuff!

Yep, tomorrow is the beginning of another yard sale weekend...
good luck...what else are we gonna do for fun.
LoL
glenda@Serendipitycottage...
I'm having an awesome giveaway, just become a follower for 10 chances to win, etc.
come on down..or up...

Oh no, Sue! I beg to differ! You can NEVER have too much "STUFF"!!.. If you have to "DePart", you have to, I guess.. But still, I think maybe you should just step back.. take a break, and think things through. Don't make any rash decisions! (she giggles!) ~tina

I feel exactly the same way. I woke up one day, felt smothered by my "stuff", opened a space in an antique mall and I'm loving the space in my home!

I asked my daughter if there was anything that I should keep - that she would want and use later, not something that I guilted her into taking - and everything that she didn't claim was fair game for sale. Been traveling life too weighed down. Now I carefully evaluate every purchase I make.

There is no such thing as "too much stuff", sugar! ;-)
xoxo,
Connie

Well honey chile, strike while the iron is hot and have some truly fabby giveaways with your stuffs and you won't be quite so cluttered! hmmmmmmmmm..a brilliant idea don't you think?

I don't want my kids having to go through mountains of "stuff" after I am gone. I'm going to do what my MIL did... I'm going to downsize and simplify a little bit at a time, while I am still young enough to watch my children (and grandchildren) enjoying the things from me.

are the header boots yours? cause I would be happy to take them off your hands.

Have a wonderful weekend!
Leann