For AtoZ 2019, Word Prompts from 'Family Word Finder' ...
a thesaurus of synonyms and antonyms in alphabetical order.
I take the first word and the last word of each letter and match it to a
photograph from my collection/files.
Some invoke more words, and others invoke that age old adage
"A picture is worth a thousand words." 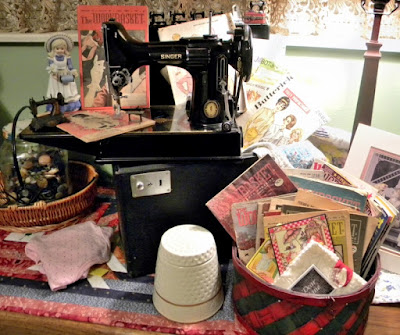 First 'K' Word Prompt...Keep
Obviously...I'm a Keeper...at least my husband thinks so...he's kept me around for over 50 years.  However, that's not what this Keep word is about.  I can use every synonym listed and then some to describe my ability to hold on to, store, accumulate, heap, stack and pile up all the stuff I have retained, preserved, maintained and conserved for....well forever.  I care for, look after, and safeguard my many collections of Keepsake Stuff.
I like to think of myself as a keeper for the sake of posterity and that 'Keepsake Stuff' will be considered as Family Heirlooms...not to be *discarded, *abandoned, *given up, or fodder for Craig's List or a Garage Sale.  *antonyms...heaven forbid!
In the Family Word Finder...the word Keep and forms of it, like keeper and keepsake, took up an entire column.   Not once did it say 'Hoarder'....whew!

Last 'K' Word Prompt...Kudos
Back in 1975 when my Family Word Finder was published, it described the word Kudos thusly...Kudos is a long-neglected word recently revived by journalists seeing a fresh synonym for praise, plaudit, honor.  Here we are in the 21st Century and once again the word Kudos has made a comeback...not only with journalist, but with the population in general.
Some of the synonym words like...praise, admiration, honor, high regard, and esteem are perfect for describing the Flag Presentation Ceremony to the Vietnam Veterans from my high school graduating class of 1965.
Posted by Sue McPeak at 4/12/2019