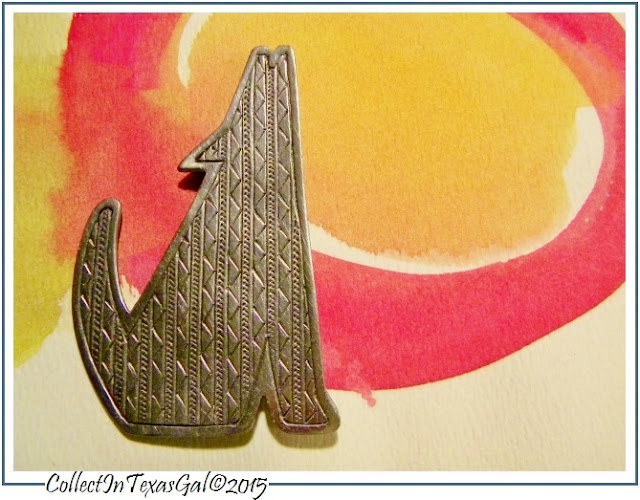 As you know, from earlier posts and photos, not only am I a gal from Texas, but I have a great love and appreciation for almost all things Southwest.  I'll clarify...I don't love rattlesnakes or much of anything that represents them...no snakeskin boots, no rattler collection, no snakes in a globe, no snake anything.   Let's talk about something else...like...this amazing Jonette Jewelry Coyote Pin.

Long a Southwest symbol, the coyote has been depicted in Southwest Art for centuries.  In 1986 the company that holds the JJ Trademark began marketing a line of pewter pins depicting animals of  the American West. 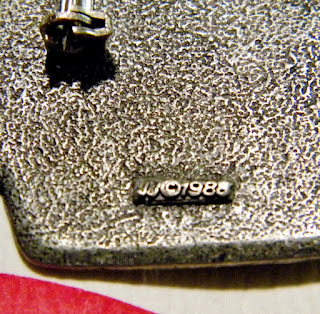 The JJ trademark represents Jonette Jewelry. a company founded in 1935 as Providence Jewelry Co. by Abraham Lisker. After WWII when metal shortages were brought on by the war, the company reemerged as Jonette Jewelry in honor of owners Abraham and Nathan Lisker's parents...John and Etta.

The JJ Trademark became an instant collectible on September 1, 2006 when the company announced it's closing due to foreign competition and market conditions.

This pin has been in my collection probably since it first came out on the market.  I don't remember exactly what I paid for it, but it's value has more than tripled as an out of production collectible.

You can view the Howling Coyote pin on my recently re-opened Etsy shop.
Here is the link:
CollectInTexas Gal on...Etsy
Posted by Sue McPeak at 10/08/2015

Email ThisBlogThis!Share to TwitterShare to FacebookShare to Pinterest
Labels: ETSY

Howdy Ms. Sue! Gosh, it has been a while since I have heard from you or been here too. You would have loved the Mexican restaurant we had dinner at int he pouring rain Tuesday night. Lots of South West treasures including this fellow. Good to see you here and I enjoyed your pretty pin.

Love the textural design within the design.

interesting pin and post. I admit I've never seen that around. The last coyote I saw was actually running down our street in Bedford, obviously out of his element and looking rather thin and pitiful.

love the pin...somehow I seem to remember I have a similar one...somewhere...must go look as soon as winter preps are finished.