Back To The 1940's and Princess Betty Singer Featherweight 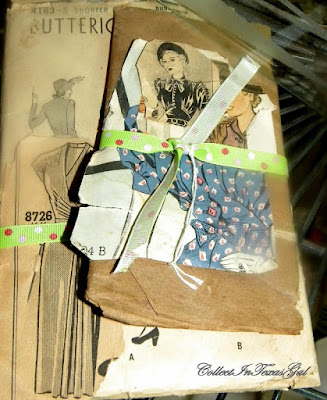 Let's travel back to the 1940's for this post. As you already know, I've spent a good deal of time there over the course of writing this blog.  First with my Mother's 1940's Scrapbook Restoration.

Then the US Census Project which was an amazing experience with digitizing records in preparation for the 1940's Census in April 2012.  I had the pleasure of sharing Mother's 1940's stories and photographs and in the process became an Ambassador for the Project as well as an Indexer and Writer on the Projects Blog.

Some of my fascination with the 1940's probably has to do with the fact that I was born in 1947 and fortunately as the first child, my parents had a Kodak and my mother was a saver of cards and other memorabilia.  When you add that to my interest in history, genealogy, and a knack for storytelling...you get 'CollectInTexas Gal's 1940's Collection of Posts'.

I know you won't be surprised to learn that I have a few 1940's Patterns in my Vintage Sewing Pattern Collection.  If you have been a reader of this blog for awhile, you know that I have several Sewing Machines that date back to the 1940's.  A couple of them are ones that still sew and many of them are Miniature Collectibles that I have been featuring on Wordless Wednesday this month. 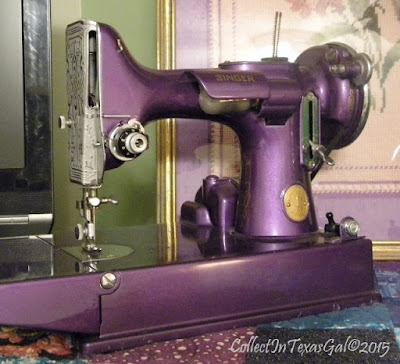 Betty has been shown here on CollectInTexas Gal before, but I haven't told you her story...so here it is...as much for me getting it written for posterity and to answer the question I know you are about to ask.  Where did she get that Purple Dress?
Betty's Birth Certificate Serial #AF179008 puts her birthday in March 1939.  She was born with a beautiful engraved scroll plate and a black shiny finish...as were her 20,000 siblings.  The production of the AF Series began in October 1938 and ended July 1, 1941 with a total of 166,749 Singer 221 sewing machines...known as "The best sewing machine ever made".  (American Made 221 Serial# Chart...HERE).
The AF Series was manufactured in New Jersey and distributed throughout the US where by the 1940's Betty found herself in California.  As far as I know she had one owner from that time until she made her way to Fort Stockton, Texas in 1998.  From the looks of her when she came into my shop, she had been well used or as we say in Texas..."Rode hard and put up wet."  Her shiny black finish was scratched, pitted and devoid of all her gold scrolling.  She was missing a few parts and was in desperate need of a major spa treatment. 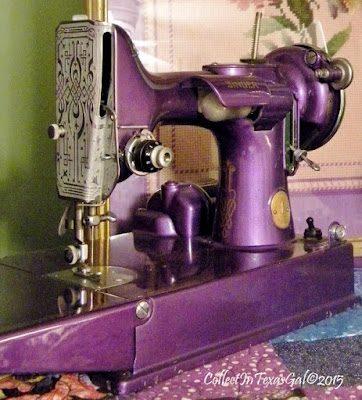 She served her former owner well until the owner died.  It was then she made the move to Texas with the daughter who inherited her.  The daughter's name was Betty and was the owner of a Book Store right next to my Quilt Shop.

Now Betty was a reader and book collector and was clueless about bobbins, thread tension and sewing machines in general.  One day she mentioned her mother had been a sewer and had left her a little black machine, and would I take a look at it to see if it was worth anything.

She was shocked to find out it's worth even in it's pitiful condition...pun intended.  As a collectors item in the 1998 market in excellent condition it could have brought as much as $400.00.  She offered it to me for $25...I gave her $75, named her Betty and shipped her off to the Singer Featherweight Restoration Wizzard.

Isn't she pretty?  I don't sew on Princess Betty even though she stitches like a dream.  Bless her heart, she has earned the right to be a Sleeping Beauty, and besides I would not want to scratch her Engraved Scroll Crown or mess up her Royal Purple Dress.  Afterall, in 1947 she could have been a lady in waiting to a real Princess...Princess Elizabeth of Great Britain when the Singer Company presented Princess Elizabeth with Betty's counterpart, a Singer 201 as a wedding gift.
Posted by Sue McPeak at 6/26/2015

Really cool story!! Glad you shared it! Betty is a beautiful, refined and elegant lady.
Life & Faith in Caneyhead

Do you think Princess Elizabeth ever sewed?

I like the purple dress. But don't let her just gather dust -- sew with her!

Love the purple and her story. You make the 40s come alive for us. Excellent job

So...when you had Betty restored, she was painted purple? Beautiful color, beautiful machine and fabulous story. Just in case my "real" e-address doesn't come thru...I'm Sandra at Thistle Cove Farm. It might publish under my personal address...sorry.

You just made my day. I absolutely love the 40's. Thank you so much for sharing. :)