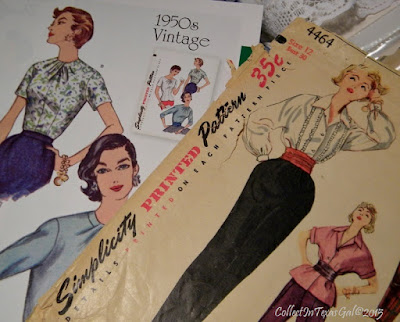 "Okay, I'll take them.  I can't stand the thought of them being thrown away.  I'll think of something to do with them, but for now I'll box them up and put them in storage.  I just don't have time right now to mess with them.  Thank-you, I think."

This is what happens when people know you sew and suspicion you are a collector of all things to do with sewing.  They sew too and have plenty of their own patterns to deal with, but can't stand to throw them out and don't have the space or the time to mess with them.  So, a big box of 'Old Patterns' gets passed from one sewer to the next to the next until....yep, they got to me...literally! 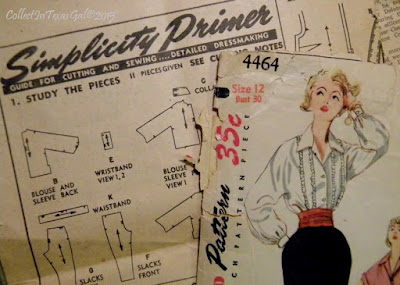 As you can see, I really stuck to my guns about not having time to mess with them.  Ha!  They stayed in my storage room all of one day.  I couldn't stand not to go through them.

The rest, at least 100 or more, are patterns from the 1970's, 80's and 90's.  Yes, altogether there are close to two hundred patterns in categories for Misses, Teens, Girls, Boys, Toddlers, Babies and Men.  Naturally, I had to sort, organize, file, date, and...well, you know...the OverDoSue Thingy!

So far, I have had to eat my words just once..."I'll put them in storage."  However, I'm right on the verge of having a mouth full for number two..."I'll think of something to do with them."  I haven't gone all the way with the 'One Something' I'm thinking about...just this post...so far...because I needed something to blog about for JUNE 1st.

My goodness, times have changed! This is great share. I was not a terrific seamstress but I sure love patterns. You are such a dear heart. Hope all is well in your part of the world! Take care and enjoy your week. Hugs, Anne

I love looking through out patterns! I love a lot of the styles of the 40's, 50,s and 60's. Things that let a woman look like a woman, smart and stylish.

I pitched the old patterns some time ago, but before I did, I went down memory lane remembering the dress or the pants suit or the valance, and the fabric. I saved only one -- a child's coat pattern that Momma used to make me a coat and then 29 years later a coat for my daughter.

that is quite a box (or two or more) of history. The artwork alone is worthy of display - you might have to start a Sue's Sewing Museum with a Simplicity room. The admission fee can maintain your habits.

I love looking at old patterns. They remind me of looking through the Simplicity and Butterick magazines my mom used to buy. We were sewers in my family (well, my mom and I - sisters didn't have the passion). I wonder if you have one I've been looking for. It was about 1977 and a smock-y dress with a Peter Pan color and puffed sleeves.

You so have a treasure in storage! How awesome to have those patterns! My grandmother sewed for my all of my school years and wish I could make things other than costumes! I do love to sew, just don't do it.