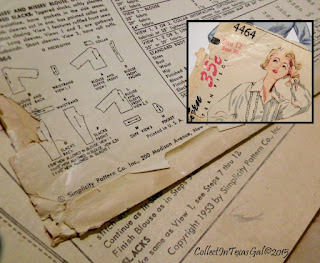 Even if you are not a 'Sewing/Pattern/Notion Collector' you will be interested in what I found in the 1953 Simplicity Pattern posted about yesterday...June 1, 2015.  To catch up you can read the post below.

Before the reveal, you should know the 'Old Pattern's' came from an unknown person and place.  As a Genealogist and History Buff, I'm always on the watch for hints of a personal nature when saving/restoring/collecting stuff that previously meant something to someone.

When it comes to sewing memorabilia, I feel a special connection and appreciation for the former owners and their efforts in creating a handmade garment or a piece of needlework.  Often on patterns, notes are taken as reminders of changes made for the next time the pattern is used.  I suspect this collection belonged to one person who used many of the patterns over and over again.  Such is the case with Simplicity Pattern #4464 printed in 1953. 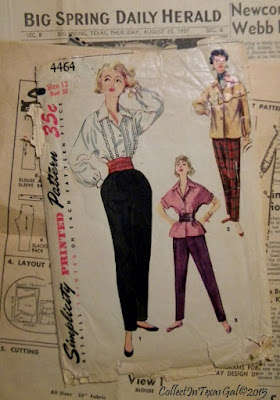 The envelope's condition is what collectors would call  well used and fragile with both the top and bottom closures tattered.  It's greatest asset as far as any value would be for the 1953 Graphics and the fold out 'Instruction Sheet' where the copyright and pattern company is identified.  It's always a plus if the tissue pattern pieces are complete..even if cut/trimmed.

This pattern's envelope was overly stuffed with what I assumed was hastily folded/wadded tissue pattern pieces.  So, when I attempted to take out the instruction sheet to find the copyright date all the contents fell out of the bottom.

As the newsprint was unfolded I was in hopes there would be a headline or some indication of a date.  I felt sure it would be from the 1950's as the pattern's date was 1953. 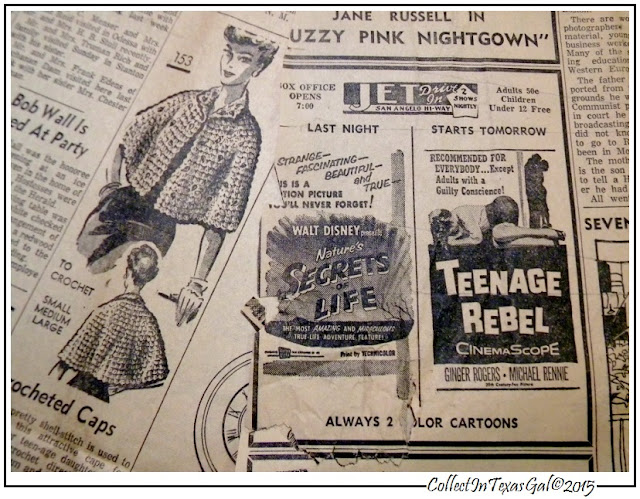 But what everyone was waiting for started on Friday night.
﻿
TEENAGE REBEL starring Ginger Rogers and Michael Renne
Recommended For Everybody...Except
Adults with a Guilty Conscience!
I was 10 years old...my parents did not have a guilty conscience...yet!
Posted by Sue McPeak at 6/02/2015

What a tagline! I wonder how many adults went to the movie with a guilty conscience which they probably didn't think they had until they read the tagline. hahaha

I adore old newspapers. Sometimes when I wrap things up in my own home I make sure to use newspapers just so I can be amused at them when I unwrap years later :)

Visiting folks who liked my A-Z theme to let you know my pick your plot book, Armageddon, is on sale for $0.99 through Monday :)
Hope you are doing well!
~AJ

"CollectInTexasGal" has been included in our A Sunday Drive for this week. Be assured that we hope this helps to point even more new visitors in your direction.

I love everything vintage! Thank you so much for sharing. :)

Yes, I agree...love old newspapers. I thought of you when I saw the movie ads and included the links for your REVIEW. I imagine you can get them through Netflix etc....are you into old movies to review. Fun anyway, to find them in the newspaper. Ginger Rogers doesn't dance in this oldie!

Yes, I thought it quite progressive for the time, and was before movie ratings. I'm sure my parents were not at all impressed or interested since Ginger Rogers wasn't featured with Fred Astaire and it wasn't a Western.

I have done the same thing AJ when moving and sometimes those packed away things don't get unwrapped for decades. Good luck with your Book Sales. I'll check it out.

We are of the same mind, Linda. Thanks for visiting.