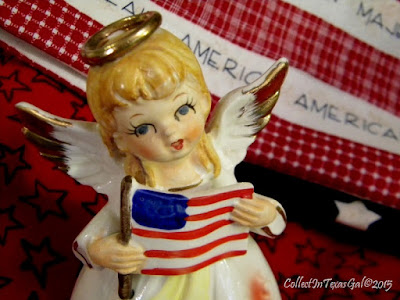 With June half over, it is past time to give July a second thought.  The first thought was at the beginning of June, which by all 'Sewing Project' standards is LATE.  But, as they say, 'Better late than never.'

In the 'Fabric World', seasonal/holiday themed fabrics should be 'Out There' at least six months in advance.  So by all rights, I should have been thinking about '4th of July' projects while sitting in front of a cracklin' fireplace back in January.

So here I am... six months later...sewing in a sweat box studio with the AC and fans blowing...trying to stay cool. 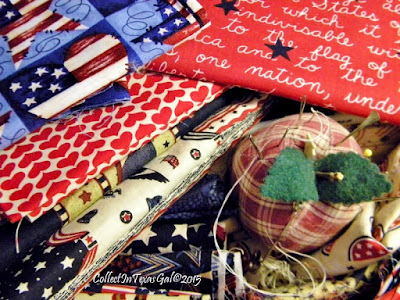 Even though this year's patriotic sewing is getting a late start, it has been easier than previous years.  Due in part to my collection of Red White and Blue fabrics being down sized, and I haven't added any new patriotic prints to what was once a collection of bolts and bolts.  Today, a couple of small baskets and three bolts is working out fine for my ABS (aprons, bags, shirts) projects.
Back to the 'Sweat Box Sewing Studio!
The Chicken Farm First Saturday Event is on July 4th.
I'd better get Firecrackin'.
Posted by Sue McPeak at 6/15/2015