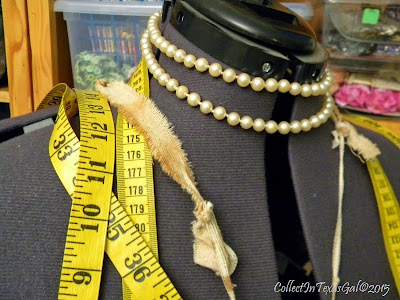 Just in case you haven't been introduced to Modella, here she is playing the role she was made for...a Dressmaker Form.

It is the second time she has auditioned as a form fitting form.  The first audition and adjusting was for a Prom dress.

After the Prom, she kept her shapely Teen size and embarked on a career as a Jewelry Model...that post HERE.  She has such a lovely neck.

Modella has been out of work for months and drawing dust and unemployment.


That all ends now with OverDoSue's Project Runway.  Eat your heart out Heidi! 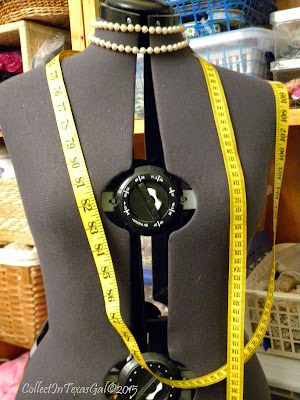 Dress forms are a three dimensional model of the torso used for fitting clothing that is designed or sewn.  As one makes a garment, it can be fitted on the model which has been adjusted to reflect the measurements of the person for whom it is made.  Dress forms have been traced back to ancient Egypt as is documented in the opening of King Tut's tomb where two crude wooden dress forms were discovered....one with King Tut's measurements and the other believed to be for the Queen.

Today, 'Vintage Dress Forms' are much sought after by collectors and the Fashion Display Industry.  Reproductions can be found covered in contemporary fabrics and used primarily for Displays and Home Décor.  These are referred to as Mannequins and are essentially storefront 'Eye Candy'.

Female forms are commonly known as 'Judy' and her male counterpart as 'James'.  Modern Judy and James dressmaker forms with sizing dials, come in a variety of colors and are typically used by seamstresses and tailors.  There you have a bit of Mannequin/Dressmaker Form history.  Read more HERE. 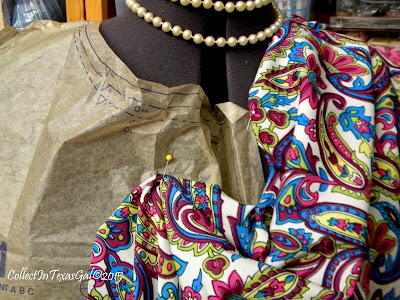 Modella...which is not short for 'Judy', but a name made up just for her as my model with the feminine la added.  She is a Ditz Dritz Dressmaker Form and is made in several sizes which can be adjusted to closely fit one's personal measurements.

Before Modella could take off down the Runway wearing an Original OverDoSue garment, she had to be adjusted from the Teen Prom Gal to .... let's just say...a Mature Misses Sized Gal.  Much more maturing and she is going to be back on unemployment...which is also maxed out.

I think Modella will always have a job. She's resourceful

I have seen two such forms come through the thrift shops. The first was in great shape and I am kicking myself for not buying her. The second was in terrible shape and seemed to be a form for a very small person.

I purchased a vintage dress form a few years ago and I love her. Right now shes wearing some of my jewelry and looking quite spiffy!! I love Modella--shes been with you awhile now so she deserves to be back to work.
Ann

I always wondered how dress forms worked so you could use them for all different sizes of people. It never occurred to me that they were adjustable! Looks like Modella's being put to good use.

Your right, even when she's just standing around, she does a good job of shouldering bags and lookin' pretty in her pearls. Eye Candy for sure!

Wow...I've never seen a Dress Form at a Thrift Store...I'd have to buy it even if I already have one. I don't think Modella would mind. Pinterest has some DIY ones that are pretty cool.

I have reproduction vintage mannequin dress form that is wearing a vintage muslin and lace dress with my grandmother Minnie's Cameo Pin and crocheted shawl. I love her, too. Modella is glad to be back to work even with all the pins I'm sticking in her.

The vintage ones are adjustable, too...but they are really contraptions. The modern ones like Modella are pretty easy to adjust up to a certain point. Then you have to go to the next size dress form. They are made for children and full figures as well. Modella's about to get a workout.

Judy and James ! Who woulda thought. Thanks for teaching me something new and thanks for your visit too!

Me too. Love paisley...guess we are both showing our Sixties Hippie-dom.

You bet....now you will know that bit of Fashion World info when it comes up in Trivia.

That's a lot of cleavage in those opening pictures. Tsk Tsk

Yeah, that Modella, she's a feminist and exhibitionist

I don't know what's so fascinating about these mannequins to me. They kind of carry some form of magic. Maybe that's because I'm not able to use them.
You wizard taylors ;-)