We all know people who repeat themselves...like you didn't hear them the first time.  Some folks can say the same thing a thousand different ways...like you didn't get it the first time.  Then there are those who talk a thousand miles a minute and forget what they said a minute ago, so they repeat themselves again and again and...well you get the picture.  And there in lies my failing of  the proverbial "Been There, Done That"...with POST PICTURES....and I don't mean pictures taken for posts...omg, that's probably Two Hundred Thousand...no, I mean pictures OF posts. 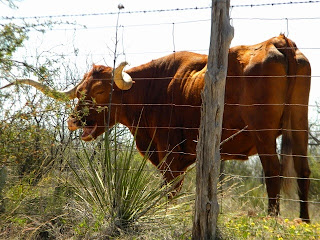 As I was going through photo files, I finally had to stop picking out post pictures for this post.  It was getting worrisome as I had flashes of seeing myself lying on a couch trying to explain away Post Photo Psychosis.

So, as you read and look through this One Thousand Posts post, remember this blog is a 'Collection' blog, and there is a reason for 'pert near' every 'pitcher and post.'

For example the 'Mocking Longhorn'...it was suppose to be a post about the state bird of Texas...the Mockingbird.  There it was perched on the post, but by the time I got out of the truck, tiptoed through the roadside thicket, focused and clicked...the Longhorn flipped her tail, 'mooned' me and the Mockingbird flew off.  Needless to say there is not a post among this blogs posts entitled... 'Mooned by a Mocking Moo'er'.  That'd be ridiculous.  Who would read that?

You are probably thinking, 'now that's an interesting rock formation..a worthy landscape shot...too bad about the old, dirty dishrag flapping in the historical Fort Davis Mountain breeze ruining a perfectly good shot.  Wrong!  I was more interested in the clothes line post, the vintage clothes pins and that awesome old dishrag.  Now that was something to post about...and I did...Frontier Wife's Kitchen. 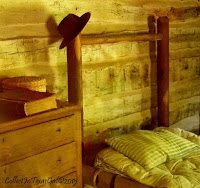 By now, you won't be surprised that among my collection of Post Photos there is an old Bed Post.  I have to say though that I was well aware of taking this photo specifically for a post in Tracks of My Georgia Ancestors....The Missing Life of Jeptha, a 4th Great Uncle.

It was a bit of a surprise to find sooooo many photos of posts in the files of photos taken in the last six years of blogging.  I seem to be drawn to fenced in critters , fence posts and barbed wire.  What can I say...I'm a Gal from Texas.

Just as surprising was the TOTAL number of photos I have posted on CollectInTexas Gal, Tracks of My Georgia Ancestors, Tracks of My Texas Ancestors and a Photo Blog.  My Google+ Photo Cache talley is 6,750.  The following Post Photo makes 6,751. 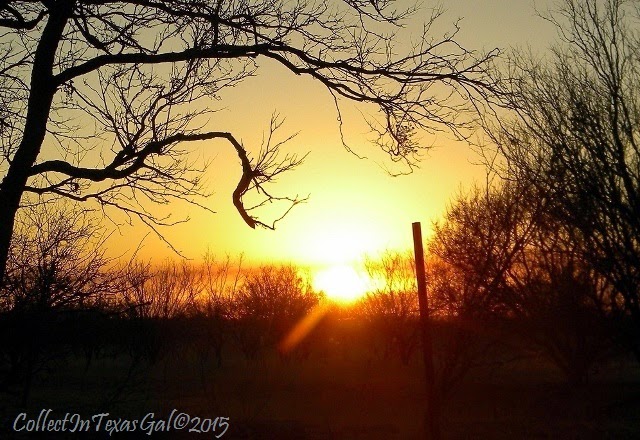 ....Oh, I forgot to mention that THIS POST...
not the Sunset Fence Post Photo...
is my
1000th Post on CollectInTexas Gal.
Now...for reals...the Asian Proverb
It's better to see something once, than to hear about it a thousand times.
Thanks for listening!
Posted by Sue McPeak at 5/21/2015

I LOVE the post theme on posts. Wow - great pics and you really do have quite the collection of pert near everything. It is funny what the eye focuses on. I often have doors - not sure if I am coming or going. Congrats on 1000 and indeed - here's to another 1000

I have SO enjoyed knowing a gal from Texas and reading all about your life. 1000 post is a milestone and I hope you keep it all going.
Ann

Hi Sue - oh dear I was going to mention my 700+ blogposts .. but that pales into insignificance - oh well I'll continue burying my head in the sand (East Sussex sand!) ... and how on earth do you count photos ... love the Longhorn one ... and the bed one ... and the fabric one, and the peg one ... the backdrop I can't easily beat .. except mine is green and pretty - The Downs with their white chalk southern faces ...

Congratulations on your 1,000 post. And it was such a fun way to read about it. You have a great style. And the pictures are really worth sharing!

Congrats on #1,000! That's pretty darn good. A post on the mooning longhorn would've been a hoot. I laughed just in the few lines you told about the photo. Post photos, very funny. Wish I'd thought of that. :-)
The View from the Top of the Ladder

The Asians always sound so wise. That same thought line is in the Bible. That last post photo is magazine quality beautiful! Nothing wrong with pictures of posts, after all, there's folks who collect strands of barb wire! Congrats on making your 1,000th post! Like you said, it sounds impressive!
Life & Faith in Caneyhead.

I'll toast to that!

I knew you would like the wordsmithing. LOL on the coming and going. I do doors and gates. They are usually posted...with signs that say...Do Not Enter and Private Property. I just didn't have room for those Post-Its. Gotta stop...the couch is looming large.

Thanks, Ann. I've loved knowing a Gal from Kansas. Heretofore it was just Dorothy and Toto. Yeah, milestones are long and heavy...but I'm up for the yellow brick road.

Do go right ahead with your 700+ Posts. With the amount of research you do, you could double..nay...triple my posts....both the ones that are strung out with barbed wire and the ones that talk about being strung out. My photo count is by Google+ Photo Gallery where I store my photos. I'm not sure what cloud they are floating around in, but it is one of the 'Perks' of being a Google+ Blogger...free photo storage...I hope for life.

Thanks Paula. Once in a Moo Mooning I get things right...as for the style...I can't put my finger on what to call it. My husband calls it SuKnitwitty, but that was when I knitted, so now he just says 'Nitwit'. My NeatO Nikon, thanks you...I just point and shoot.

Thanks Su-siee. I laughed at your 'hoot' word, and immediately started wordsmithing in my head about how to rhyme hoot with a mooning longhorn...'poot'...now see what you've started. Please feel free to post about posts...I'm sure your California Posts are a lot different from my Texas posts.

Yeah, at first I thought the Proverb probably was a Confucius wisdom...good to know it came from an even earlier beginning...wow...think of how many kabillion-thousands of times it's been repeated. Thank-you so much...I might submit that photo to Texas Parks and Wildlife. If they ever need a photo of the 'Last Fence Post Standing at Sunset'...that'll do it.

Congratulations!! I hit my 1,000th during A-Z this year. Hard to imagine writing that much, isn't it? Makes me understand why people turn their blogs into books...
Love that you did your post about posts ;)
AJ Lauer

Thanks, AJ. I have published one book from my Blog...the first year's posts. I do have plans to publish my AtoZ years....one of these days.

Congrats on #1000 post and your 6,000. plus photos - I thought I was the Queen of photos but I gladly give up my crown to you. I don't have a total count but I have nearly 3600 photos on my iPhone right now. Maybe I'd better not buy the 32GB version next time. Alana ramblinwitham.blogspot.com