E is for Enchilada~TexMex Style

BienVenidos mi Amigas!
That's Spanish for Welcome my Friends...(gender biased Amigas...gals)...Okay, and Amigos!
In keeping with my Texas Alphabet Theme... for the
Letter E here's the Whole Enchilada!!! 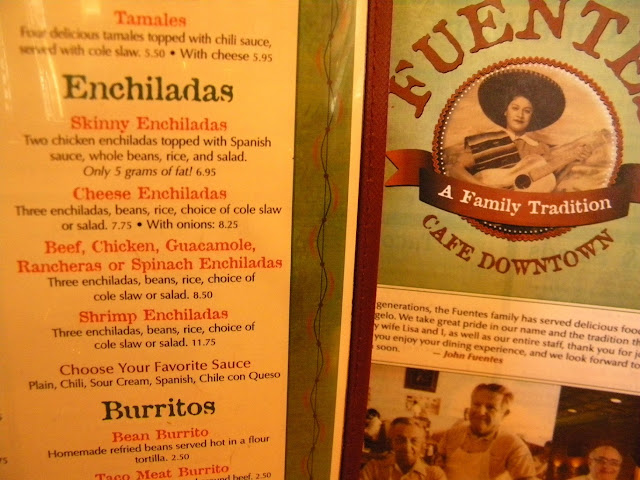 The waitress comes to our table and says...
Here's the menu!  How would you like your Enchiladas?  Skinny or Fat?
I look at HiHoney...he's pattin' his paunch and peerin' over his readin' specs and says....
I should have the Skinny and She should have the Fat, but I think we will both have the
WHOLE ENCHILADA Plate! 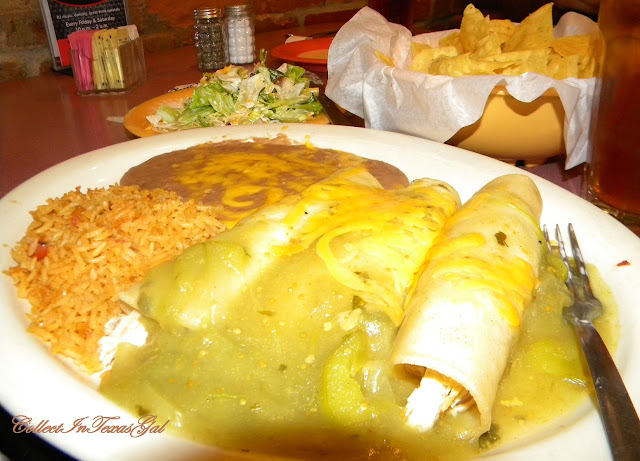 The term "TexMex" first entered the common lexicon as a nickname for the Texas-Mexican Railway, chartered in 1875.

Train schedules, published in newspapers, abbreviated the names of railroads. For example, the Missouri Pacific was called the Mo. Pac. and the Texas-Mexican was abbreviated Tex. Mex.

It was in the 1920s that the hyphenated form was used in reference to the railroad as well as to describe people of Mexican descent who were born in Texas.

Food historians claim that the first print evidence of "TexMex" in reference to food happened in 1945.

From there, TexMex restaurants slowly surfaced outside the Southwest U.S. in cities with substantial Hispanic populations.

Then TexMex went "gourmet". In the 1970s Mexican culinary expert Diana Kennedy is credited for taking this common food and making it trendy fare and a new "must-eat" cuisine.

The cuisine actually originated with the Texans of Hispanic descent or Tejanos, as a hybrid of Spanish and Mexican Indian foods when Texas was still part of New Spain and, later, of Mexico.

Served at dinner tables across the South Texas region, between San Antonio to Brownsville, this cuisine has varied little from its earliest origins and was heavily influenced by the cuisine in the neighboring northern states of Mexico. Originally, TexMex started with a taste for cabrito (kid goat), barbacoa (barbecued cow heads), carne seca (dried beef), and other products of cattle culture that were common on both sides of the Rio Grande during that period.


OOPS!  Sorry Ya'll....I should have put up a RedHotChili Flag on that last sentence!
We're use to the Cabrito and Barbacoa here in Texas....Yankees....not so much! 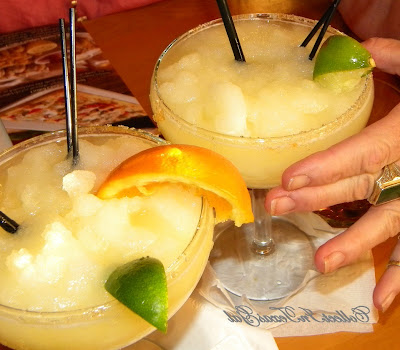 Here's what ya drink with the Whole Enchilada Plate!
Margaritas!
What's To Know About Margaritas!
TEQUILA!
Choosing the right tequila is the key to creating the perfect margarita recipe.
Tequila is required to be at least 51% agave. Premium tequila has the best taste and quality.
It is made with 100% blue agave juices and must be distilled and bottled in Mexico.
"Tequila 100% de Agave" or "Tequila 100% puro de Agave" must comply with strict Mexican government regulations.
Ya'll might remember my Letter A post...
A is for...A's In Arithmetic and Agave
Now, Mi Amigas and Amigos....Here's what you Do AFTER you've had the Whole Enchilada Plate and a couple of Primo Margaritas.   Turn Up Your Volume!
Now, I bet you are ready to grab your HiHoney and TexMex FreeStyleSpin your way over to Jennys.

For More of the
Letter E
PS...Just so Ya'll know...It takes more than a couple of Margaritas for HiHoney to do The Inside Turn and after that he's really Looped for The Loop!  We usually leave The Hurricane for our last few Dance Steps....out the door!  Ole'!!!
PPS...I swear I didn't have any Tequila when I did the Margarita photo!

Wow! I think I need to go and grab a large glass of iced water. That sounds hot!! Delicious, but HOT!

Candy @ The Little Round Table said...

ew! bar b qued cow heads.... ick. enchiladas sound good though, I had to laugh when we were watching Waterboy, with Kathy Bates last night. Of course they were picking on Cajuns and so she makes snake...bar b q alligators- the whole gator, a frog cakes...complete with frogs, I bet she made the cow heads too!

I've never seen 'skinny' enchiladas. That is so cool that you shared this menu with us.

I really like carne seca but I'm not sure about the cows head thing...

But, girl, if it's got enchilada sauce and melted cheese on it...I might just go for it.

Thanks for a fun stop on our little journey through Alphabe-Thursday.

How fun! My dinner is going to be a SERIOUS disappointment now! I feel dizzy after watching that video :-)

Love Tex-Mex food- unfortunately can't get it here in Spain! :(

Mmmm you're making me want some . That looks like a fun dance. I miss doing that sorta thing.

This was so fascinating and great (goat eating aside)! I definitely could go for one of those margaritas!

These look wonderful! I love to make echiladas for dinner. Yours look better than mine.

I am seriously addicted to Tex-Mex! And the hotter the better!! In case you didn't know, capsicum gives you a sense of well-being, and I am all for that! Thanks for a great post!

Great post! I love enchiladas. I'll be making some for Rae when we go visit.

Too fun! I so enjoy your upbeat Texas posts. You have me hungry for enchiladas, now (and not the skinny ones). The dancing video was fun -- the gal looked like she should have been getting dizzy, though!

What a FUN post.....I loved learning all the history and looking at your photos. The idea of including the video was really cool. So glad I stopped by...I had a great time.
Genie

I'm a certifiable TexMex freak who likes it hot and I'm also a northeastern Yankee. Most folks up here prefer mild. BLAH.

this was a fun post ... i do love learning something new every day!

This was so much fun. Now I want a green chicken enchilada and a margarita!

MMMMM. Enchiladas! I haven't had any in a very long time and are making me very hungry. :)

Oh...delicious and a great idea for dinner! Thanks for an awesome post!
Happy Enchilada Day!
Coralie

We have a lot of Mexican and Southwestern types restaurants here and I love the food, eat it every chance I get!

I didn't realize the term Tex-Mex went back that far. I thought it was a relatively new term.

I'll take one of those margaritas, PLEASE!

I do love me some enchiladas!

Those look so yummy! I love enchiladas! I prefer daiquiris over margaritas though! Yup, I'm a rebel.

I never eat Enchiladas before :(

You know something, my name Amiko cames from Amigo (you know the song Adios Amigo? it's my parents favorite song).

But because my name is Amiko, people always think I am a Japanese, lol

Well, I am your new follower via Alphabe Thursday.

Now I want enchiladas and margaritas!
:-)
Su-sieee! Mac
This and That. Here and There. Now, Sometimes Then.

My sweets wants to come visit! HeeHee! We love Mexican food, the hotter the better. I still love a margarita with my Mexican food. This is a terrific post. Making me hungry and I need to dance after wards! Good exercise after all that great food! Hugs Anne

Mmm - love me some margarita's!

Well, I'd like to try an enchilada - never have had one. Now, Tequila - well, that's another story. After trying it a couple of times I've decided that Tequila and I, straight up, do not like one another. A margarita would be something else entirely! When's the dinner party?

Yummm!!!! Love TexMex! Lived in Texas and New Mexico throughout the years with my parents (dad was in the Air Force) and then again with my hubby (military man too)...And we had some amazing foods from both states that highlighted TexMex flavors.
It was fun to hear how the term "TexMex" originated.

Blessings & Aloha!
(making my way through some "E" posts...it's so fun meeting you too!)

sorry I am so late in commenting I have a week of being very busy. I loved your post thank you for reminding me how much I love enchiladas