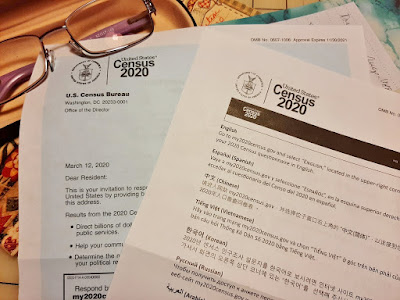 This is not my first rodeo with the US Census Bureau.  As a matter of fact, I've been a student of the Census for years as a result of in depth research for my Family Tree.  I'll get to that later, but for now let's talk about this 2020 history making Census Form that is an invitation to respond via the internet.
My Great Grandmother, Martha Jane, would be saying, "the what net."  Had she received this in the mail she likely would have handed it over to one of her children to see if they could read any of the languages on the information sheet.  That's what my husband did...more or less, after seeing the greeting.  "Here", he said, "You be the Internet Resident."
I do think it's pretty neat being a part of this 'High Tech' Census taking.  Even better is this year the 1950 Census will be made public and I will be a part of that, too.  That means that everyone born in the 1940's will be listed.  After studying the US Census' from the 1880's through the 1930's for Family Tree research, it's kind of a big deal...at least to me...and many other Genealogist.

By now you have received, sat down at a computer/laptop and sent your 2020 Census to the Secure Census Bureau Cloud...again Martha Jane would be so confused about the 'Cloud'...I must admit, it's still sort of confusing to me.  Anyway, back to you...if you met the April 1st online deadline you are good to go knowing you have conserved natural resources, saved taxpayer money and helped process data efficiently.  If not...they will know...and...you will receive the 2020 Census Paper Form through the mail.
In the event you miss the Paper Trail deadline...then...don't be surprised when the Census Interviewer aka Census Taker aka Census Enumerator will be knocking on your door like back in the days of my Great Grandmother.

Good Afternoon, Mrs. Carroll.  I am Mrs. Jenkins the Census Taker.  I apologize for the interruption of your evening meal, but I am down to the last day allowed by the Department of the Interior and your household is the last family on my schedule.  Is your husband home?
My Great Grandmother had just settled her children at the table for their supper. She offered the Census Taker a glass of tea and explained that her husband and brother were in the field and would not be in for at least another hour.
While Mrs. Jenkins made ready to fill in the Census Form,  Janie filled the children's plates then sat down with her glass of tea and provided her husbands name as....Head of Household....Stephen Carroll, white male, birthdate..Nov 1872, married, 3 years, Farmer, born in Tennessee.  She was just finishing with the last person in the household, John her brother, when her oldest reached across the table for the basket of bread, and in the process knocked over the Enumerators glass of tea.
The Enumerator quickly picked up the completed Census Form and began shaking off the tea which had a few rivulets of tea and black ink spotting the page.  Janie had dashed to the kitchen for a cloth which helped to blot the now blurred letters of her children's 'Personal Description-Columns 4-6'.
My Great Grandmother apologized as she dried tears and hushed bawling children.  Mrs. Jenkins packed up her papers and prepared to leave as quickly as possible.  It had been a long day.
Later that evening she envisioned the children as she had seen them at the table and attempted to repair the blurred lines of their names and relationship.  The oldest one was wearing a dress, and I can just make out O t h e l l, so the last letter is 'a', she thought to herself.  Then she completed that childs line with daughter in column 4 and F for Female in column 6.  A few months later, the Stephen Carroll Family sat for this portrait. 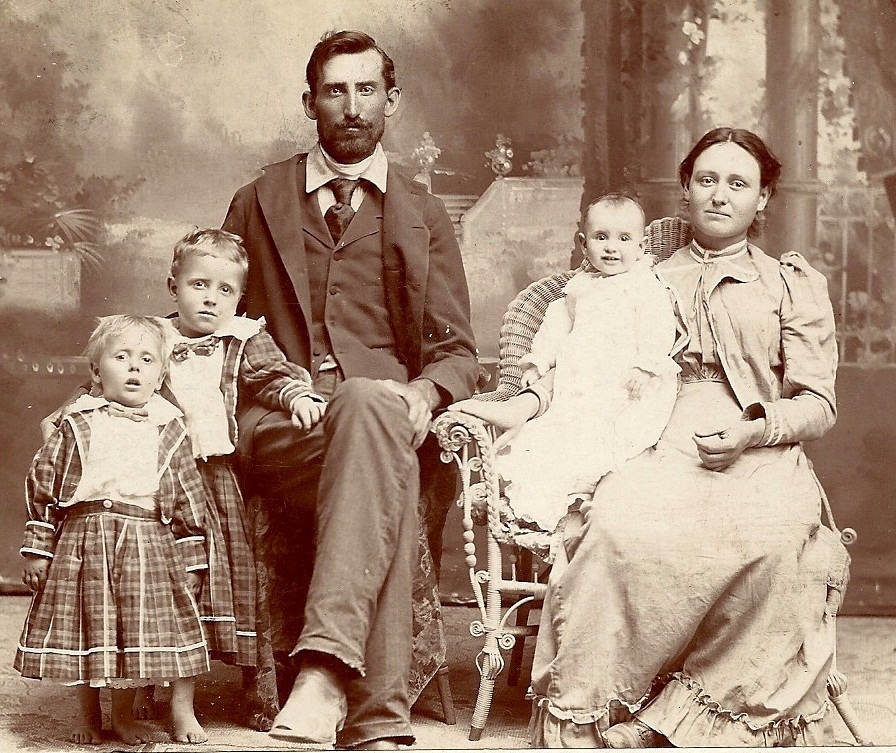 Standing next to their father are sons Merritt Douglas and Othello Elisha.
In Great Grandmother Janie's lap is my Grandmother Stella.
April 2010
One hundred and ten years later when this photo was found in Janie's Photo Album their identities were not known, and I tagged it  "couple and three daughters".  Through a lot of 'Photo/USCensus Research' including Mrs. Jenkins 1900 Census report,  I was able to determine that the couple was indeed Stephen B. and Martha J. Carroll and their three children.  Mrs. Jenkins in her haste, left Stella off completely, and mistakenly put an 'a' at the end of the name O t h e l l  instead of an 'o'.
One look at him in that skirt, and I'd have made the same Enumerator Error!
Posted by Sue McPeak at 4/03/2020

How a cup of tea can make big damages for years ;) Boys used to weare dresses at this time, not so easy to make a difference between a girl and a boy!
C is for Colour