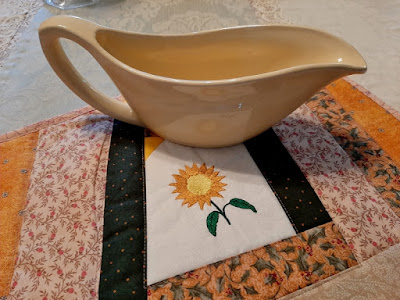 "It's all gravy" is a phrase from an Old English saying.  Life, it explained, is meat and potatoes, and the luxuries are gravy.
As with most phrases from olden days there is a flip side of the coin or in this case 'gravy boat'.
This 'slang saying' fits my 'Aladdin' style gravy boat...'profit or money easily obtained or received unexpectedly.'
First...it is a collectible made by J.A. Bauer Pottery founded in Paducah, Kentucky in 1895.  Bauer Pottery moved to Los Angeles, California  in 1909.  My gravy boat's incised Los Angeles stamp confirms it was made after 1909.
It's value ranges from $12.00 to $49.00 depending on which online vintage dish monger you search.  So back to the slang saying about 'money easily obtained or received unexpectedly'...the 'gravy' in this boat led to an unexpected priceless Bauer Mixing Bowl. 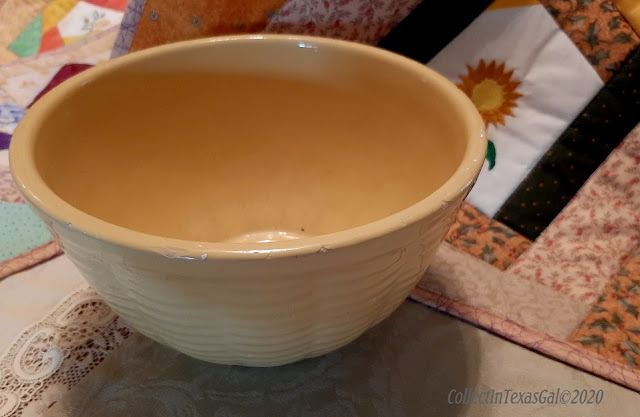 The incised and glazed over markings on this bowl make it hard to read, but the number '8' in the center gives it authenticity as an early piece.  Another hint that it is an early hand thrown piece of crockery is the vertical finger fluted line running from top to bottom.
It was likely made in the 1930's which fits the time period in which my husbands grandmother would have mixed and let rise many loaves of bread.  Now you know why it is priceless!

Life may be 'meat and potatoes', but thank goodness for the gravy and it's unexpected blessings!
Posted by Sue McPeak at 4/08/2020