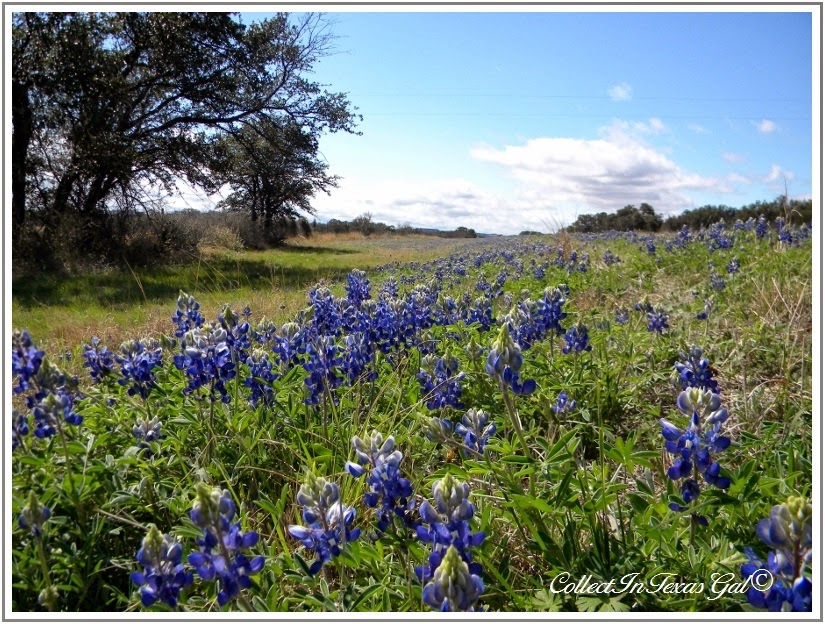 'The Dames', congregated on the steps of the State Capital carrying baskets of bluebonnets.  "Ladies, let's make our entrance into the Legislative Chamber one they will never forget".

At that 'The Colonial Dames of Texas' stampeded through the massive double doors of the chamber and marched down the center isle tossing bluebonnets right and left.

The pandemonium that followed was a sight to behold, and certainly achieved the unforgettable entrance my Great Aunt Flora was after. 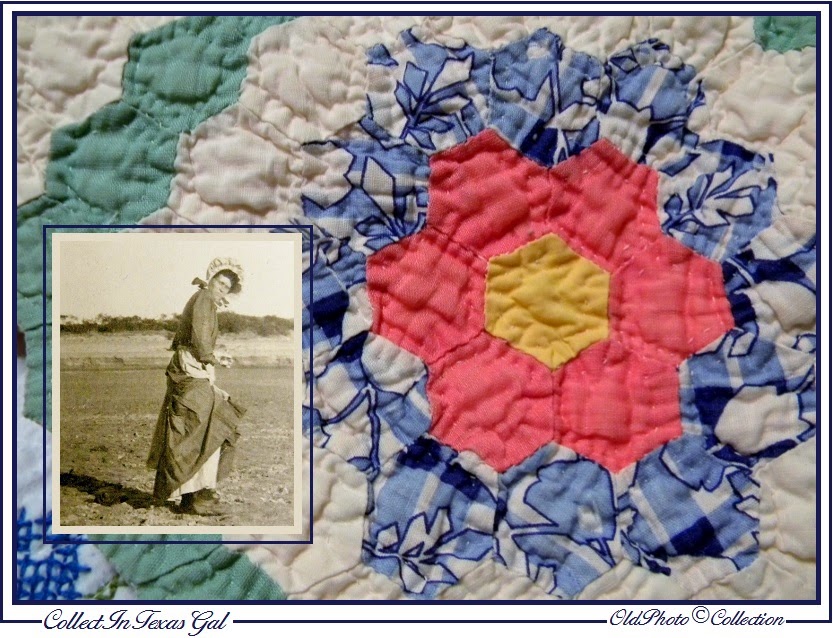 I first heard this story from my Aunts...Bea and Irene as they stitched on their Mother, Flora's Bluebonnet quilt block.

"Sister and I pieced this top years ago.  How many was it, Bea?", Irene asked.

Beatrice paused with her needle stabbed in a blue floral hexagon, and answered Irene, "Well, now let me think....I believe it was right after Mama decided she wanted Bluebonnets in her flower garden."

"That's right, I remember now", Irene said and launched into the Bluebonnet story.
Mama was a member of the Colonial Dames of America In Texas who were instrumental in getting the Bluebonnet named as the State Flower.   Remember Sister, when she told us about speaking before the Texas Legislature to convince them to pick the Bluebonnet over the Cactus? 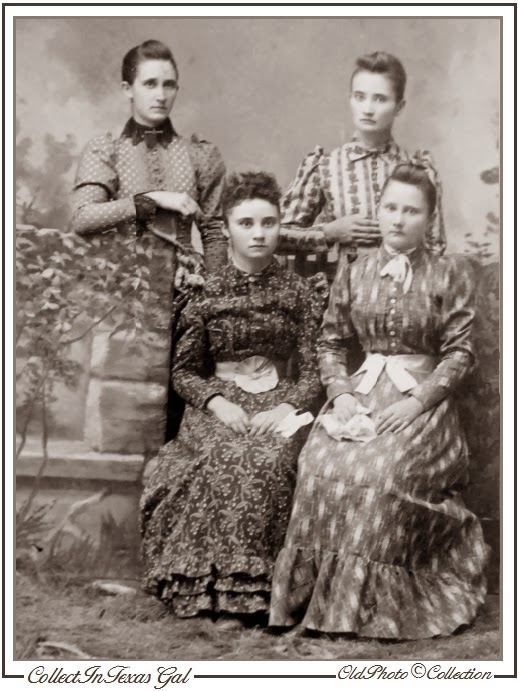 There she was debating the merits of a flower that only blooms in the spring, lasts for only a couple of months and is difficult to grow from seed, against *Cactus Jack.  He certainly had the upper hand, being a known politician and promoting a plant that was found from Brownsville to Amarillo and from Texarkanna to El Paso.

Whereas the Bluebonnet grows mostly in Southern and Central Texas.  Beatrice piped in with, "I loved it when Mama told about how she whipped the *Vice President of the United States on the floor of the Texas Legislature with a Lil Ole Blue Flower.

After Flora's passionate speech on the floor of the Texas Legislature in 1901, the 'Lupinus subcarnosus', sandy land bluebonnet or buffalo clover became the only species of bluebonnet recognized as the state flower of Texas.  Wikipedia

Great Aunt Flora and her sisters owned and operated 'The Wall Flower Shop' in Wall, Texas.  The four sisters...Flora, Fern, Fauna and Fuschia were founding and charter members of 'The Dames'.  Their shop became known as 'The Great Wall Flower Shop' and the Bluebonnet their ©Trademark. 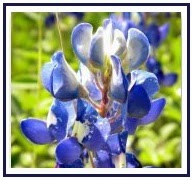 You may be on the plains or the mountains or down where the sea breezes blow, but bluebonnets are one of the prime factors that make the state the most beautiful land that we know."  W.Lee O'Daniel, 34th Govenor of Texas 1939-1941
*Cactus Jack, aka  John Nance Garner, Vice President of the United States 1931-1933

PS...Great Great Uncle Fesscue and Aunt Ferna Flowers certainly did have a sense of humor when naming their four daughters.
Posted by Sue McPeak at 4/07/2014

Me too, Ann. The Bluebonnet Photo was taken along the roadside near the entrance to the LBJ State Park in Johnson City, Texas. The fields there are covered in wildflowers this time of the year.

The way you bring history to life is just wonderful. I never thought about things like how state symbols were chosen. Seems sense prevailed this time, the bluebonnet is so very beautiful! I wonder if any fist fights ever broke out over naming a state bird ...

Anyway can't wait to see what adventures your lovely ladies encounter next time :-)

Thank-you Liz...I love Texas History. Good question on the Fist-I-cuffs over State Birds...I'll have to check it out. Surely there will be some controversy with the 'Mockingbird'...Texas State Bird.

I've only seen Bluebonnets once on a family vacation to Texas. They are very pretty. Great story and I also love the sisters' names.
http://yeakleyjones.blogspot.com/

Thanks Ann, glad you enjoyed the story. I couldn't pass up the chance to name the Dames those flowery first names with a last name like Flowers...can you imagine living down a name like Fesscue Flowers! It could happen...at least in fiction story telling...LOL!!

What a great story....and the girls' names are a fabulous part of it.

I love blue bonnets! Much better as a state flower than the cactus. :-)

Well it is definitely prettier than the cactus. I love their names.

Loved your story today and the way the names tie into the flowers...
The bluebonnets sure are lovely, never seen one in person however.

True fact, my best friends name is Flora and she's a florist!

Those names are hilarious! What a fun shop that must have been. I once knew someone who named all his kids after alcoholic beverages--Brandy, Sherry, Margarita...

Sue how are you? It has been a while. I am trying to catch up, seems it is what I do best here! I love the stories you tell and this one is terrific! DO you know the actress Poppy Montgomery? All of her siblings are named after flowers.! I just thought that was a fun fact to share! Great to see you here! Hugs, Anne

Great post. You keep us enthralled with your beautiful writing. Well done in the way you bring the history to life.

Hi Sue - I always think Blue Bonnets are beautiful flowers and so striking - but who'd have thought they'd need to be promoted so vigorously and thank goodness the cactus didn't win out ...

Interesting to know they're quite difficult to grow ... and yes a sense of humour for their names ..

I do so miss the bluebonnets in the Spring! Thanks for the pictures.