The Lone Star Gallery by A Girl Raised In Texas

'Come And Take It'
Those were the daring words when the Lone Star of Texas was flown over a cannon barrel in Gonzales in 1835.

The challenge referred to a small, brass cannon that Mexico had issued to Texans for defense against Native Americans. Mexico wanted the cannon returned and it wanted the upstart Texans to submit to governmental rule. In December 1835, Texans fought at San Antonio de Bexar under a flag sewn by Sarah Dodson, who made the banner for her husband and his fighting compatriots. 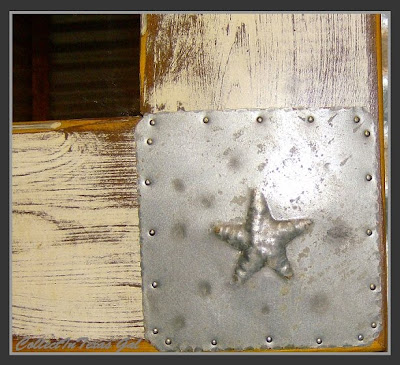 At the Battle of Goliad in December 1835, volunteers from Georgia arrived waving a white silk flag stitched by Joanna Troutman, an 18 year old Georgian who had never been to Texas. Her flag featured a blue, five point star with the words "LIBERTY OR DEATH" inscribed beneath the star. On February 13, 1913, the Texas Legislature named her the "Betsy Ross of Texas" for her Lone Star flag. In May 1836, the "Lorenzo de Zaval flag" was adopted as the banner for the fledgling Republic of Texas. It featured a blue background with a centered white star circled by the letters T-E-X-A-S. Later that same year, on December 10, the Republic opted for a different flag. The "David G. Burnet flag" also featured a blue background, but with a gold, five-point star in the center. Neither flag gained support from the citizens. finally, on January 25, 1839, the Third Congress of the Republic officially accepted a flag designed by Dr. Charles Stewart. That Lone Star flag of the Republic still waves today over the Lone Star State. 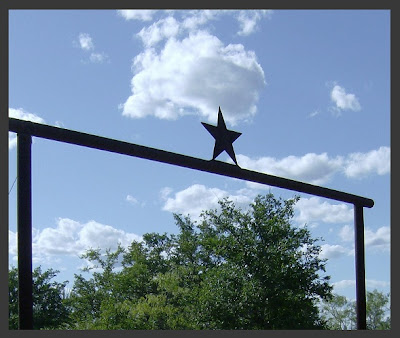 CollectInTexas Gal's Lone Star Gallery features Photographs taken by this Girl Raised In Texas...GRIT...of  The Lone Star of Texas, plus People, Places and All Things Texan. 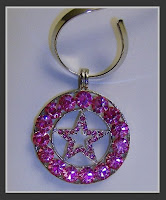 The Lone Star Gallery is listed under the CollectInTexas Gal Header.
Click on the Title.

Texas is known as the 'Friendship State', and the Lone Star is a symbol of 'Friendship'.

So,Ya'll are welcome to 'Come and Take' this GRIT's photographs...no brass cannon attached...but  I'd appreciate a 'ShoutOut'.
Posted by Sue McPeak at 4/30/2010

Stars and Hearts are such great decorating tools. Please stop by my blog and vote for my friend :-) Have a great weekend!

Every Texan I have met has been so sweet and warm hearted! xoxox Grace

I think this is the first time I have realized where "grit" came from. It's so wonderful to proud of our state heritage!! Have a wonderful weekend.
Ann

Hello Sue, I missed your gorgeous flowers on the previous post. Beautiful flowers, blue bonnets and 'foot.' HA! A great shot among the flowers.

The Texas star info is very interesting. You are full of these wonderful
Texas facts. You have 'true grit' Big smile. Award winning GRIT. I do love your posts. Look for a shout out on Pink Saturday.
I am asking a favor too. Today I wrote my post about my Grand's birthday. He will be looking for comments. If you have a moment come over. Thank you so much.
Hugs, Jeanne

Hi Sue! Another great post. I love historic details and trivia; so interesting. I gave you a shout out. Come on over and check it out.
Blessings,
Cindy

Hi, Sue--a GRIT, here. I write western historical romance, and love Everything Texas--DRT member. I liked this post about the flag--I thought I was the only person in Texas who knew a girl from Georgia made the first Lone Star flag. I read this in a Historical book of homes in Macon, Georgia. It says the girl gave it to the Georgia boys who were going to Texas to help with that fight. My e-mail is cayeary@hotmail.com and I live in San Marcos. I'll bookmark your site so I can look at it more thoroughly later. Celia www.celiayeary.com

Girl, you are the most Texas, texas girl I've ever met. You always have something interesting and informative to tell us.

Hi Sue, thank you for the sweetest comment to my grandson. You are the best.

I did a PS shout out and I was hoping you will post something pink for tomorrow. HA!. Wouldn't that be a hoot.