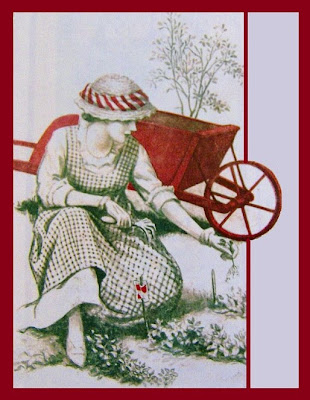 1gar.den \'gard-n\ n [ME gardin, fr.ONF, of Gmc origin:akin to OHG gart enclosure - more at YARD]1a: a plot of ground where herbs, fruits, flowers, or vegetables are cultivated  b: a rich well-cultivated region  2 a: public recreation area of park (a botanical~) b: an open-air eating or drinking place
2garden vb gar.den.ing to lay out or work in a garden

It's important to know as much as you can before jumpin' into...or in this case diggin' into...a new project.

Relying on my 1961 Edition of Websters to define and remind, has worked out pretty well except when I started my foray into the WorldWideWeb and the Definition of Computer....
com.put.er \kem-'pyut-er\ n: one that computes; specifically an automatic electronic machine for performing calculations
world.wide.web\ huh?\ see giant spider

That's about the time I started Bloggin', and....well, that opened up a whole new can of WebsterWorms, as you can imagine for this GRIT....

The 1961 Edition of Websters doesn't have BLOG listed. It should have been somewhere around blocky, bloke and blonde.
So here's a SuDefinIshun......BLOG - a place on the InterNet or InnerNet or EnterNet or WorldWideWeb.....really doesn't matter how you spell or misspell it.....it's not in 1961 Webster either. And, the thing is, I've relied on this book through the education of my child and now my grandchildren.   No wonder my son has to use 'Spell Check' and my Grands call me NanaNitWit.

Anyway, back to BLOG....a place on the WorldWideWeb... which is based on…as far as I can tell on the Children's Nursery Rhyme, The IttsyBittsy Spider who went WebSpinBerserk after the water spout event flooded the WholeWideWorld. Okay....I got off for a sec...on the WWWeb where ANYBODY in the whole wide world via their Personal Computer(PC)....also not in my Webster.  Don't you think it's interesting tho, that the name WEBSTER (the book) is used on the WWWEB and those who use TheWEB are called WEBSTERS? Hmmmmm!

Stay with me!  This post really is about gar.den.ing!

Anyway...back to BLOG....via personal computer, share 'Information' (mostly useless ramblings about themselves...speaking primarily of this blogger and this post) with other people known as Bloggers, who also share their ramblings and then want lots more Bloggers who Blog to comment on their Blog. The Information is sent to somewhere in OuterSpace via WonderWhereWireless wires to this WonderWhereWeb which then spins it off to the intended ReceiversPC via their SecretCode that only they and their InterNetProvider know.....unfortunately, we have learned that the Provider CanNot keep a secret

Wireless? I don't know about you, but I have a tangle of wires behind my PC that makes cooked spaghetti look straight. How they got wireless outta that mess, beats me, especially when even 1961 Webster defines wireless as having no wires. 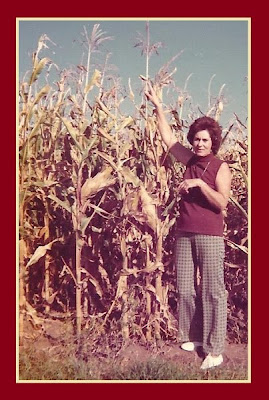 YAHOO and GOOGLE.
Webster misses again with GOOGLE….no surprise...but today  GOOGLE is a word heard through out the WholeWorldWeb….

...I know it’s really the WorldWideWeb…
...my Computer Information Technology DirectorSon told me, and after reading this, he is probably going to lie through his SpellCheck Teeth that he was the
one who introduced me to the WWW.
Finally, 1961 Webster has Yahoo…
...an uncouth and rowdy person.
That doesn’t work for PuterTalk…but, kinda explains why Mama sometimes called us kids ‘You Bunch of Yahoo’s’.

Here's my Iowa FarmGal Mama in an Iowa Corn Field sometime back in the 1960's.  Now that's what I call a gard.en full of corn \'ko(e)rn\ noun...skipping to def...4: a plant that produces corn  5:  something that is corny.

PS...I guess I lied through My SpellCheck Teeth about this post being about gard.en.ing!

However,  it has inspired me to seriously consider two parts of the gard.en definition.

2...b: an open-air eating or drinking place

Hi Sue! Great post! Love the picture of your mom in the corn. There is absolutely nothing like fresh corn on or off the cob!
Be a sweetie,
Shelia ;)

You ain't just somethin. You're somethin ELSE! You invented the word C-O-L-O-R-F-U-L! happy day! XXMollye

Great post about gar.den and gar.den.ing! I like the two definitions at the end of the post. I think I'll "lay out" on my bed for a nap. : )

hoot: (n) a)the characteristic cry of an owl;
b)a cry of scorn or derision; or c) one that is hilariously funny.

Hi Sue! Love this post and I love the pictures...Your Mom's picture brings back memories of my own mother's farming experience. She always had the greatest gardens...flower and vegetable. Thanks for stopping by today. I agree with SusanB's comment...Think I'll "lay out on my bed" for a short nap!
:)Marilyn

Hello Sue, as usual you have me smiling all over the place. Your posts are a fun read. I love Tina's comment. Clever girl too. smiling again. I do love your mom's photo in the high corn. she is very pretty. Is she a 'Grit' too?

Love the picture of your Mama in the corn. We do love our vintage pictures don't we!!!! Very clever post-taking gar.den.ing to a whole new level. Have a great day.Ann

Great post! My how things have changed!
Thank you for your kind words about Homer's passing. We are still so sad but it is easier with the support we get.
Be blessed,
Cindy

Hah! That was funny! I have spiders spinning their webs in my Window. Now, if I didn't spend so much time on the WEB with all of these open Windows, I might not have a spider web in the window of my powder room.

P.S. I forgot to say...love the picture of your mom. She looks really tallllll.