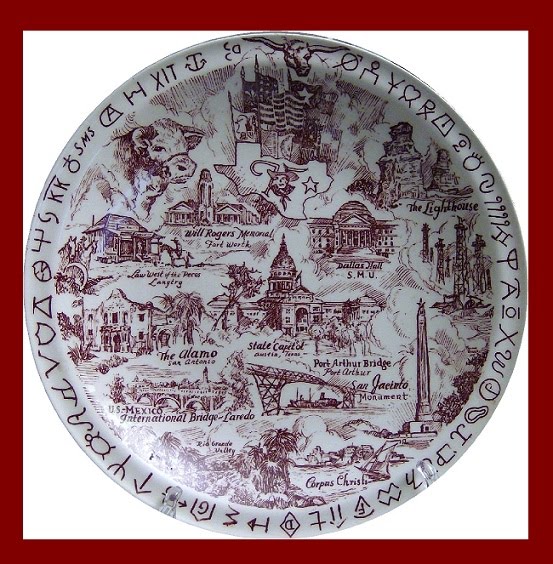 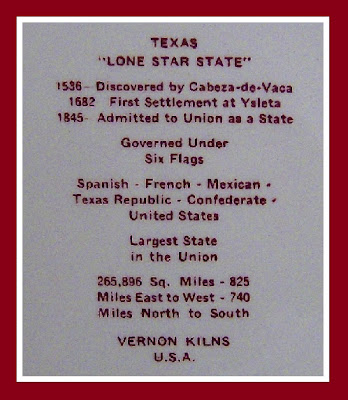 Have a Heapen Helpin of Texas History, Ya'll!

Yep, it's a Front N Back Platefull, allright!

And...if you are a Texas History Buff, like this GRIT, you'll notice right off that this is a...

I think that's what is called an Oxymoron!
I double checked that with HiHoney, also a TexHistBuff and his take was...

"Sue, your readers are lible to label you a TexasMoron with a mouthful of Plate Platitudes, but yeah, I guess that's an oxymoron!"

Made by Vernon Kilns, California, USA
Click HERE for More on Vernon Kilns History.
The Texas Lone Star State Plate is the latest addition to my Texas Plate Collection.  Found it at the Goodwill Store in Midland, Texas.  Yep, went to pay for it and the cashier took one look at the plate and then at me and said, "Somebody in the back MessedUp.  I should have approved this being put out for sale."  I snatched it right outta her hands and peeled off the $1.99 tag and started wrappin and baggin! 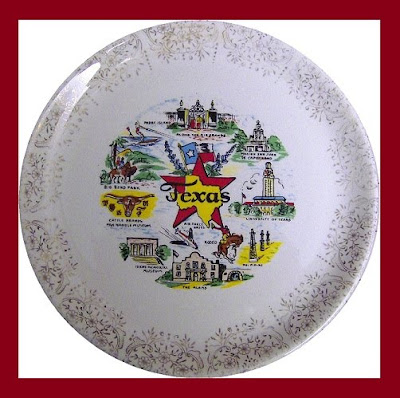 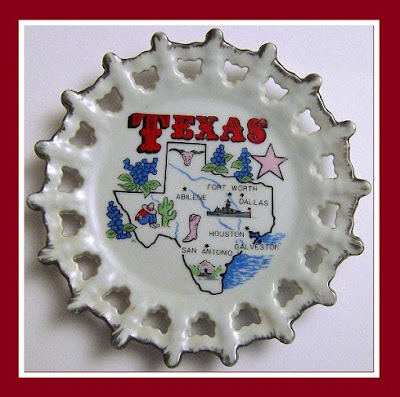 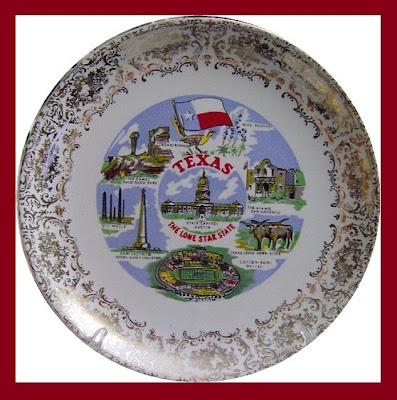 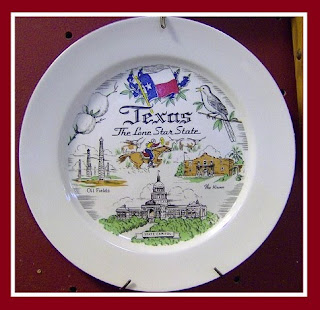 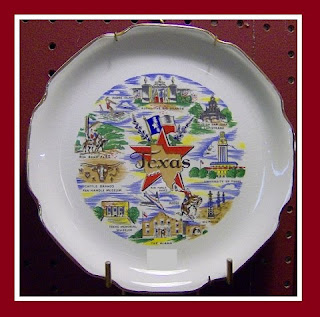 PS...Here's a Hint about the Dateless/Dated Thingie...Texas became the second largest State in the Union when Alaska became a State January 3, 1959.

Good for you! I love your Texas plates! Very cool collection!

Hi sister and yep the badge is cute if I do say so! Also love the new look in general. And I could stay forever and listen to George. Oh that just irks me to no end about the Goodwill clerks. I know all about all the good they do and for goodness sake we ALL donate far and above to them and gladly. But for heavens sake give me a break already. I get so tired of them thinking they are the Antique Roadshow or something. For God sake just put the dang price on it and let it be gone to someone who will love the dang thing. Instead some smartalecky woman thinks she is a genuine apraiser and starts that crapola. Another thing I hate is to take a truckload of good stuff to them to donate and not even asking for a receipt and then when you want to spend a cheesy dollar on something they want to jack the price up at the register. Ok whoa nellie I'm on a roll now. Sorry sister, XXMollye

LOL! You crack me up!! :-) I love your Texas plate collection. What a great bargain!

I did tell you my husbands family was from El Paso, didn't I? He would love me to put up some TEXAS history plates instead of my girly flower ones!

Hey-
I am so glad to meet you and thank you so much for stopping by my blog and becoming a new friend.

I am also a retired teacher, and I was an avid volleyball fan while my girls were in school. Our youngest daughter played volleyball 1 year at a junior college.

I enjoyed visiting-
I love your blog.

Sue you are so darn cute I wish I could just hug you! You always make me smile! Thanks for your kind comments on Tink! She is sitting on the sofa with Smokey, you would think they own the place! She is going to be fine after a good nights rest! The kids went out to buy her a brand new bed!

I have always loved plates and this Texas collection is very lovely! I love your oxymoron!

What an awesome Texas plate collection...come on over and show them off at NTT...hope to see you there:)

I’m having a GIVEAWAY…come by and check it out…I think you will like it!

Hi Sue, I think your Texas plates are nothing but fun. It is fun just looking for them. OK, where do you hang them?

I'm glad your brother is feelign
a bit better. You mom and your family is worried I know.

What a steal on that plate! It is fabulous! I'm a Carolina girl currently in Texas, and falling head over heels for the place. Have a fabulous week!

I can just see you grabbing that plate out of her hands and wrapping it up! You are too funny.
I love your Texas plates!!

I was at an auction on Sunday and won a vintage vanity mirror for $5.00. No one bidded and the auctioneer did not see that it has a reserve on it, so when he said sold he had to let me have it!
Woohoo!!!! My lucky day.

I love it! I collect Georgia plates and have one from each state we've lived in (GA, FL, NC, VA and HI) Some are in my breakfast nook, which I'll show tomorrow night for Tablescape Thursday. Thanks for stopping by my blog and for your kind comments on my guestroom and table.

I'm so HAPPY that you came to my PAR-TAY!