The State Tree of Texas Map...Ya'll Come To Texas!!! 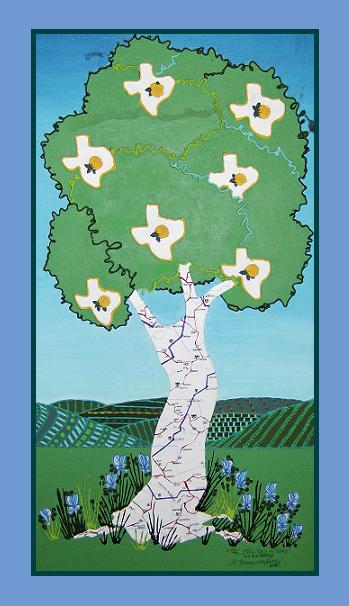 Traveling in Texas can be a Challenge, especially if you are 'Directionally Challenged', and I am.

Oh, I'm good at Right and Left....I always go right that way I'm never wrong.  It works...oh, I'd say,  five outta ten right turns.  It's the five turns that shoulda been left that always gets me in trouble as the 'Navigational Map Reader'.  The best excuse I can come up with after making the wrong right turns is that Stupid Map.

Here I am with a 5x10 neatly folded map of Texas and I only need to see the part that shows West Texas.

You'd think after flipping it open you'd be able to unfold just that little section. But, nnnnooooooo,  the MapMiesters are all from East Texas and think their part of Texas should be on top of the Foldarama!

Ya'll have seen Pickups pulling Campers driving down the highway with the front windshield covered with a map...right?  That is me...showing HiHoney that we should of turned RIGHT right down there on that little bitty squiggly line that leads to the TPee that runs along that blue snakey line that says  RioGrande Camp Ground!

That was HiHoney...the guy you saw hanging out the drivers side window.  I don't know what his problem was. I couldn't help it that the map went from 5x10 inches to 5x10 feet  with OneFlip and  27 East to West UnFolds. 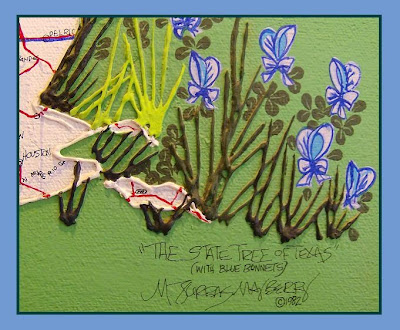 I should have 'The State Tree of Texas' map up in the front of the PickUp instead of back there in the camper.

The problem with that is that it's a painting and is screwed to the wall of the camper.  In all honesty, if I navigated by the tree trunk map, my Hi Honey would be putting me and the map out at the first Right wrong turn.

You see the painting was done by a Yankee Artist Friend who looked at Texas as the perfect PokeFun PunPlace. 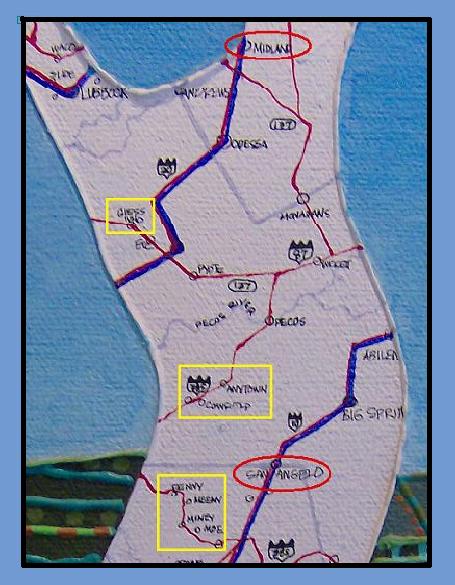 Now, just in case Ya'll are planning a trip to West Texas, I sure want you to know how to FIND this GRIT!    I live in San Angelo which is South of Midland where MyMama lives.  So far so good with the TreeTrunk map.  Here's where it might get a bit confusing even if you aren't Directionally Challenged...Pecos and the Rio Grande are way West  of Midland and no where near between Me and Mama! 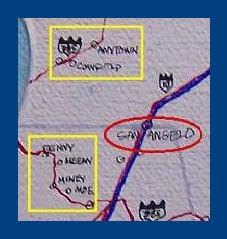 I sure wouldn't want Ya'll to make a wrong Right turn and end up in Anytown,Texas or Eenny, Meeny, Minney or Moe, Texas.  I can't tell you a thing about them...I haven't made that Right wrong turn ... YET!

PPS...HiHoney is out shopping for one of those TomTom Thingies!
Ya'll Come!

You are so funny Collectin Texas Gal!!!
When I come to see you, I'll just plug in the GPS! LOL.

We have a Garmin you can borrow for your next trip, lol. You need one of those atlas books that has all the maps. It has TX on 4 pages. But I do find they make the letters awfully small!

LOL, You made my day. My Sis in TX freaks me out when we take a drive. She knows by direction., that if she just heads north, then west, that sooner or later she will come to a road or a cowtown that looks familiar, and lo and behold, we are there. I'm a faithful map-user, another Sis is a Garmin gal. I need to get one of those.
Have fun getting to wherever you're going. And...thanks for taking me with.

It's good to get lost every now and then. You can use the Tom Tom to find your way to antique malls and junk shops. Yahoo!

LOL! Love the artwork! The blue bonnets and towns Eenny Meenny , Minney and Moe! You need me when you travel... I know my directions. :-) Even when I get lost, like the other day when my daughter turned the wrong way coming home from a bridal shower in a part of town that we were not very familiar with, I know that If I keep heading west I will eventually run into the highway that will get me home. I usually take a better look at a map before I start out and then I have it all in my head. But since she was driving and I thought she had been to this place before...

On our recent visit to your great state, we found that the GPS works great if you just listen to "her". My DH says he now has two women telling him where to turn. Texas was beautiful with the little blue flowers along the roadway. I think we were a little north of Midland (I must check my map!).

Hi Sue, I just came over to see if you were posting anything. Sure nuff you did. I love reading your posts because a good laugh is guaranteed. The tree trunk map is a hoot. I have a bad sense of direction and if I am talking to someone in the car. Oops, there goes my exit. We finally bought a TomTom and as long as my dh feeds it the info, I'm good.

I have your brother in my prayers Sue.
A big NC hug to you today,
Jeanne

I hope things are going as well as can be Sue.

I love this post! As long as I see my Colorado mountains I am ok! Otherwise! Oh Oh! You always manage to make me smile! :)

Sue, I am map challenged. There's just too many icons and I can never get it right. Mapquest usually isn't any better. I usually just have the person at the final destination draw me a hand written map. Have you checked my Family Friday post from last Friday---I posted Gary' car and my outfit in the hat. Check it out.
Happy Friday.

"I KNOW WHERE YOU LIVE...AND I KNOW WHERE TO FIND YOU! I have been travelin some back TEXAS roads lately, and WOW!!!! The Bluebonnets, "are a bloomin" like CRAZY!!! Soooo... beautiful like HEAVEN, my sister ANGEL!
iloveyou...
conniemarie