Give Us This Day Our Daily...Second Time Around Tuesday 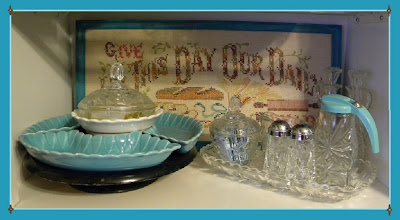 What's In Your Wallet?
Mmmmm Let me see....Not much!
Oh, wait, here's a DogEaredDollar and a RattyReceipt!
Must be the change from Thrift Shoppin!

What's In Your Cupboard?
This Amazing Stuff purchased for a few DogEaredDollars!

The Lazy Susan, made by California Pottery USA, has been in my Collection for so many years, I have no idea how many 'Doggies' it cost. But whatever I paid, and it probably wasn't much, it's been worth it. It's been well used and loved. 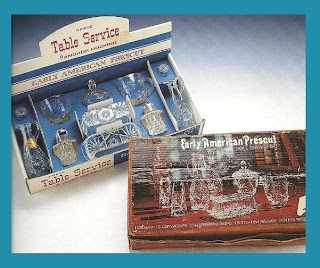 The pattern is commonly referred to as 'Star of David' and was massed produced by Anchor Hocking starting in the 1960's.
I received this set, except for the Syrup Server, as a wedding gift in 1965.
After 45 years of collecting, I have ALL but ONE piece listed in
Collectible Glassware from the 40's 50's 60's.
It's THE 5" Footed Bud Vase listed for $595.
I've never seen one, and believe me I've picked up a bunch of Bud Vases in the most obscure, spiderwebbed, dusty and outta the way places all over Texas.
I have a sneaky feeling that 'THE ONE FOOTED BUD VASE' is HERE.

I love those vintage blues. My fave color!
Blessings!
Gwen

Ooo, I love it all. The sampler is wonderful and the lazy susan is just perfect.

You must have a big house to store all your goodies! My husband threatens to set a match to all my "doings" in our basement. He doesn't get it. I love all your treasures, Sue!

Great finds! I really like the vintage teal lazy susan!

In the Carolinas, we are GRITS...Girls raised in the South! :)

Thanks for stopping by my blog, also! And for the kind comment! Hope to see you next week at Second Time Around! :) ~RHonda

Hi and welcome to 2nd time Around!

Oooh, I love your precut pieces! I can't wait to see more!

Thanks for dropping by! Your comment cracked me up (re: olive/popcorn jar)!

The sampler is beautiful! I love it. Great buy and a discount to boot! Love your precut glass!
Nice post and looking forward to seeing more!

Oh I love ALL the goodies! It would appear you had a good day shopping and collecting!.. And I ALWAYS love the blues! ~tina

Love that light blue on the dish and the syrup pitcher.

Thanks for coming by to visit.
welcome to your first VTT