One In A Millionaire BlogginBirthday Cake!!!! 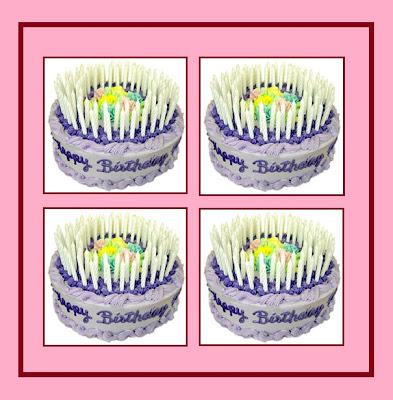 ABOUT CAKE...
In Western culture Birthday Cake is defined as a pastry or dessert served to a person on his or her birthday.
Birthday cakes are usually decorated with person’s name and carry a message of congratulations.
Candles equal to the number of year’s a person has been alive are also placed on the cake.
There is also a tradition to place one extra candle to bring good luck.
Birthday cakes are usually spongy and the most popular flavour in cakes is chocolate.

ALL 'The Candles' on These Cakes are EXTRAS ~ Just wanted to CashIn on The GoodLuck Thingy!!! 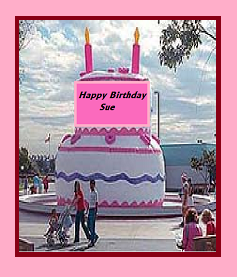 History of Birthday Cake can be traced back to the ancient Greeks who made round or moon shaped honey cakes or bread and took it to the temple of Artemis -the Goddess of Moon.
Some scholars, however, believe that the tradition of Birthday cake started in Germany in Middle Ages.
Sweetened bread dough was given the shape of baby Jesus in swaddling cloth and was used to commemorate his birthday.
This special birthday cake later reemerged in Germany as a Kinderfest or the birthday celebrations of a young child.
Germans also baked another special kind of a cake called Geburtstagorten as it was baked in layers.
This was sweeter that the coarse and bread like cake that were usually made at that time.

Now, That is what I call 'A Layer Cake'!!!
Just want to be sure there is enough cake for All Ya'll! 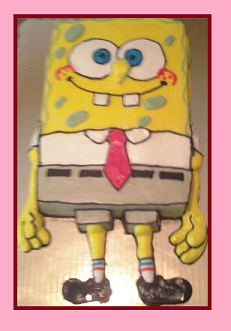 Technical Advancement in Making of Birthday Cake...
In the beginning the cakes used to be similar to bread. They were sweetened with honey and enhanced with nuts and dry fruits.
The ancient Egyptians were the first to show evidence of advanced baking skills.
Medieval European bakers used to make fruitcakes and gingerbread that could last for months.
During the 17th century, Europeans had made considerable advancement in the art of making cakes. They began to make what can be called precursor to modern cakes that were round and had icing.
This was mainly due to the development of technology that made available reliable ovens, food moulds and refined sugar. At that time cake hoops - which were round wooden or metal moulds for shaping cakes were placed on flat pans to effect the shape. 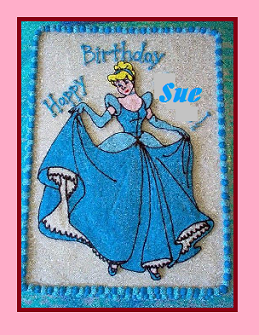 The First Icing that was used in cakes were usually a boiled composition of finest available sugar, egg whites and flavors. Then icing used to be poured on the cake and then the cake was put back into the oven for a while. When the cake was taken out, the icing cooled quickly to form a hard glossy ice-like covering.
Mouled cakes and fancy ices reached their zenith in Victorian times.

With the time, the art of baking cakes kept progressing and it was not until the middle of the 19th century that the cake we know of today developed.
Taste and appearance of the cake was enhanced with extra-refined white flour and the use of baking powder instead of yeast.

I'm soooooo Thankful for Technology! Just look at what it's done for Birthday Cakes and Birthday Parties!
Wonder what the Medivial Folks would have thought of SpongeBob? 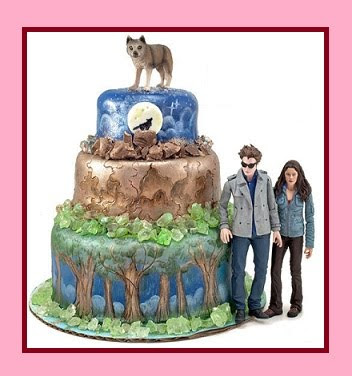 Traditions and Superstitious Beliefs Related to Birthday Cake
In medieval times people of England used to place symbolic objects like coins, rings and thimbles in the batter of the cake.
It was believed that those who found coin in the cake would be wealthy while the unlucky finder of the thimble would never marry.
Wedding was signified for the person who found the slice of cake with ring.
Even today some people follow the tradition and place small figures, fake coins and small candies inside the cake.
If the cake fell while baking it was considered to be a bad omen and signified bad luck for the person in the coming year.

OMG!!! Nana, You are SooooooCooooool!!!
Who Knew that in 2010 'ThisTheme' would be Still Sooooo Popular!!!
I definately DidNot Bake this Cake...Taking No Chances on BadLuck!
Eat At Your Own Risk! 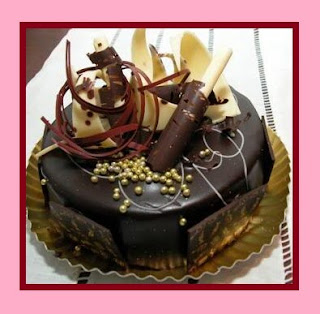 Why is Birthday Cake Round?
In earlier times, Birthday cakes were mostly round in shape.
Greeks offered round shape cake to the Goddess of Moon - Artemis as it signified moon. They even placed candles on the cake to make the cake glow like the moon.
Round shapes of cakes were preferred as these represented the cyclical nature of life. Most specifically, the sun and moon.
Technical reason given for the roundness of the cake is that most cakes we know off advanced from the bread.
In ancient times breads and cakes were made by hand. Typically, these were fashioned into round balls and baked on hearthstones or in low, shallow pans.
Hence, these naturally relaxed into round shapes. With the progress of times baking pans of various shapes were developed and today we see cakes in imaginative shapes and sizes. 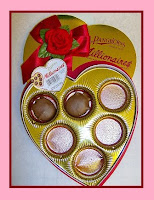 My Favorite Birthday Cake is CHOCOLATE!!! In Any Shape!!!
For My Birthday, Mama gave me this box of Millionaires...I saved a couple for ya'll...NOT!

PPS...Ya'll ComeBack tomorrow for Pink Saturday where there will be the best Texas Chocolate Sheet Cake ever made! The 'Maker' is a GRIT and January Birthday Gal...not this one tho...I'm still not takin any chances on The BadLuck Thingy!

Also...Today is the LAST Day to SignUp for the BlogginBirthday Party GiveAway! If you haven't already signed up click HERE and get on that list!!!! BTW there will be Door Prizes and Party Favors....so SignUp!

I think my favorite cake here would be the Cinderella cake!.. But Sponge Bob is so much fun too! I always wished I took a class in cake decorating, but I get along o.k., I guess, with the ones I make just for the family! Someday, I may look into a night class or something! (0; Looking forward to the festivities tomorrow, between your birthday and Pink Saturday! See you then! ~tina

Hi, Sue! I'll have a piece of that chocolate beauty. Well, maybe even two since it was my birthday too.
My grandmother always put a nickel in the batter of my birthday cake when I was little. You know a nickel could buy five pieces of candy back then! Somehow she always managed to give me the slice of cake that held the nickel. Sweet memories!
Thanks for the big celebration this month. Hope you have enjoyed your birthday month! ~ Sarah

I've always wanted to take a course in cake decorating, but it's just never worked out. Love,love all the cakes..but I have to admit..I love Sponge Bob. What can I say for me???? That chocolate cake should please anyone..it most certainly would me. Just looking makes me drool.
Yummmmmm..

OMG!!!! Amazing TWILIGHT cake... So sorry I haven't been on.. craziness with this ankle and everything else!! Need to go to your birthday bash!!! LOVE IT ALL!!!
Hugs~
Cat

Chocolate oh I love Chocolate! Happy Birthday Sue. I know this has been a lucky day for you!

Thanks for the party. That Twighlight cake is so coool! KK~June 26th.