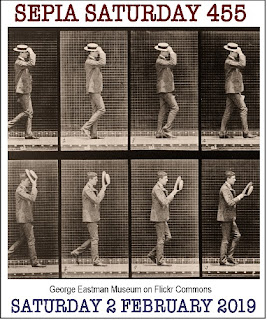 Sepia Saturday 455 had me wondering where in my family photos I would come up with anyone that would remotely fit the photo prompt.

The film aspect sure didn't work as none, nada, not one of my Texas ancestors/relatives/folks made it to Hollywood.
However, they were big fans of Western Movies and my Dad could have been a stand in for one of his favorites, John Wayne.
I could have used him as a 'Hat Tipper', but that black Stetson was a far cry from the film strip's Dapper Dude's hat.  So how about their attire?  Nope, Dudes and Cowboys aren't comparable.  Just imagine them switching hats or belts or boots.  Give a thought to them switching from a sidewalk to a cow patty pasture.  Guess I'll have to let that angle for a post...Go! 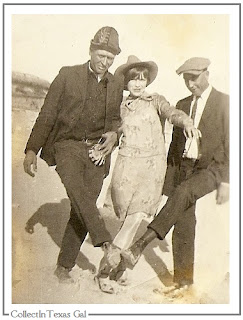 Oh wait!  I do have a photo of a great uncle who made it to California, had a Dude friend, could dance in a chorus line, and was a gentleman hat tipper.
Here's how I know he made it to California.  His first runaway from home happened in October 1908.  It didn't end well as he was picked up by the Sheriff who recognized the mule he was riding.
Delsey belonged to Sheriff Christopher's father-in-law and the 'Wanted Poster' was the spittin' image of the 10 year old rider...the father-in-laws grandson.
So, it was back to the farm, pickin' cotton and waiting for the next chance to head West and a life of exciting adventure.  It wasn't long until he hired out as farm labor cotton picker and worked his way to California.
He stayed in touch with his mother by letters with postmarks from across the southwestern states up the west coast and eventually from Canada. 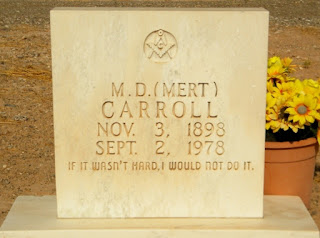 After that adventure he embarked on the next adventure... driving a team of mules pulling a covered wagon.
Destination...Ward County, Texas, where his mother, my widowed great grandmother, had acquired a parcel of land to homestead.
And homestead he did...several times across Texas and New Mexico with his final resting place back to that first homestead where all who knew him agreed with his headstone inscription.
For sure, he was an example to his nephew, my Dad, as a seeker of adventure, a hard worker, and a gentleman Stetson Hat Tipper.
Posted by Sue McPeak at 2/02/2019

Hi Sue, that headstone does seem to sum up his life. Great that you've seen those post marks on letters to his mother. It's always interesting to me how relationships are expressed in correspondence.

It how interesting the small part of person life. Picking cotton my mom did sugar beets.
Coffee is on

Cowboy hats are a classic.

You found a fine collection of people in hats. Your great uncle sounds like quite a character!

Some might say Mert lived a hard life, but it sounds to me like it was more of an adventure to him with work along the way to support that adventure.

Super hat photos. Maybe your ancestors didn't make it to Hollywood but your great uncle probably knew a story or two worthy of a movie plot.

Mert was a Star regardless of Hollywood ! Well done the man in the hat!

Hats and men with character. Quite a collection.

What a fitting tombstone! I love his adventurous spirit.

A colorful and well lived life. Love the inscription.